In the Zone: BTV Noise Map Contours Determine Who Can Get Soundproofing Funds 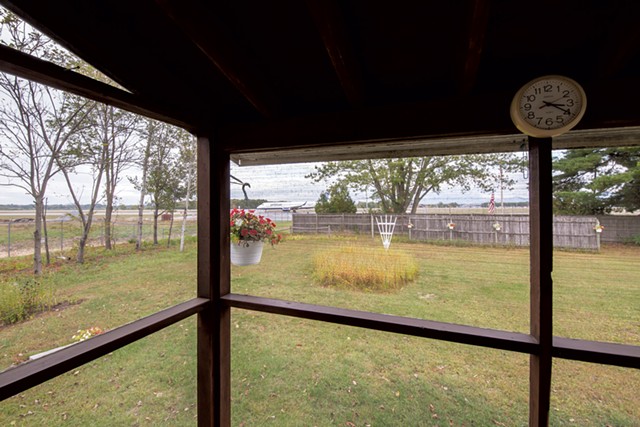 Since the 2013 announcement that F-35 fighter jets would be based at Burlington International Airport, the planes' noise impact has been heavily debated. Through it all, Ed and Gail Garvey decided to stay in their pale green ranch-style home a few hundred feet from the runway as bulldozers demolished the houses all around them.

The retirees at 44 Dumont Avenue resisted offers to sell their home to the airport because they didn't want to leave where they had lived happily for decades. But when they heard about a new kind of soundproofing assistance, courtesy of a Federal Aviation Administration grant, they expected that their location would qualify.

Ed Garvey said he got bad news when he called the airport in late September, the same week the first two F-35s arrived.

His is one of five residential South Burlington properties — two single-family homes on Dumont and two duplexes and a fourplex on Airport Parkway — in the 75-or-higher-decibel noise zone, where the roar of jets is forecast to be so loud that even soundproofing can't bring it to acceptable FAA levels.

The Garveys have two choices: sell their home to the airport or stay where they are and suffer the consequences.

Meanwhile, their neighbors whose homes are in the slightly lower 65-decibel noise contour — 2,640 dwelling units, with an estimated 6,120 residents — do qualify for soundproofing grants. That zone stretches from South Burlington deep into Winooski and also includes small swaths of Williston and Burlington.

Homeowners who are approved would first get new windows and doors, according to Nicolas Longo, the airport's deputy director of aviation administration. If the sound level inside remains above 45 decibels, the FAA could also pay for insulation in the walls and roof to seal cracks through which the noise permeates like a cold wind.

People who qualify for soundproofing but choose not to pursue it could opt for one of two other FAA programs. Under one, the airport would buy their home, soundproof it and then sell it. Under another, the airport would offer "equalizer" grants to homeowners who show they can't get fair market value for their homes because of airport noise.

The grant program could bring $100 million to Chittenden County over 20 years, in annual increments of $5 million.

But many of the details of the process are still being worked out.

For example, while the Burlington-owned airport counts as the "applicant" for the funds, the FAA requires a 10 percent match for work financed by the grant. Airport officials don't want to pick up this tab and have suggested that each municipality cover the amount for its grant-eligible residents.

That hasn't gone over well with leaders such as Kevin Dorn, the city manager of South Burlington, where the airport is located. "The City of Burlington has all the cards here. They own the airport," he pointed out.

Winooski leaders also oppose paying the match. "To put not only the environmental burden but the cost burden on Winooski ... is not an equitable approach," Winooski Mayor Kristine Lott said. The municipalities should jointly lobby for state funding or new federal funds to help cover the cost, she suggested.

Airport officials have spent the past few months gathering comments and recommendations from residents and public officials about the soundproofing grant application they plan to file to the FAA by year's end. They have not decided who would be first in line for funds expected to come in the fall of 2020. Longo said consideration might be given to mobile-home owners and low-income residents, as well as to properties that are in the noisiest grant-eligible spots. A public meeting about criteria and priorities is scheduled for October 24 from 5 to 7 p.m. on the airport mezzanine.

Many of the mapping details seem like pointless bureaucratic distinctions to Ed Garvey. He moved to Dumont Avenue in the late 1950s at the start of his 35-year career as an airline agent and supervisor for what became U.S. Air.

He walked to work year-round on a street once lined with tidy homes on spacious, family-friendly lots. But in the late 1990s, they started to vanish, the Garveys recalled in an interview on their back porch, where the conversation was interrupted at least four times by the sound of commercial aircraft taking off.

"Why didn't they tell people?" Ed Garvey tweet this

The airport's growth, and accompanying din, prompted buyouts under a noise mitigation program. Over the next two decades, FAA grants enabled the airport to acquire and tear down more than 150 homes in South Burlington. "A lot of good neighbors got scared away," Ed said. "Some of them were afraid that they were going to be required to sell. They decided: We're going to take whatever they can give us and get away."

The Garveys declined multiple offers for their home. "We liked it here, and it was OK with the other planes," said Gail, a retired secretary. But that was before four F-35s made an unscheduled stop in Burlington at the end of May.

Four months later, the couple inquired about soundproofing and got the final word that the government won't pay for it.

"We thought we were getting windows and insulation," said Gail.

"Why didn't they tell people?" asked Ed, adding that he feels misled.

Airport leaders say they never told Gail or Ed that their property would qualify.

"I don't know where he's coming from, because the program never offered him soundproofing," said Gene Richards, director of aviation at Burlington International Airport.

Longo added, "We're just following the rules that the FAA puts before us."

Under the old map, the Garveys were also located in a 75-decibel zone. Given their proximity to the runway, there was never much chance that classification would change, suggested Longo.

They can still sell to the airport, he noted. Their home would be razed. No other potential demolitions are planned, Longo said.

Faced with the same dilemma is Gary Deforge, a contractor who lives at 32 Dumont. He said he'd consider moving if the airport were to offer a price in the $280,000 to $300,000 range, enough to buy a similar house in Chittenden County. But the airport's offers — defined by an FAA formula for fair market value — have not equaled the replacement cost, he said.

The Garveys held out hope in part because airport officials and supporters of the F-35 touted soundproofing as a way to muffle the sound of the jets once they arrived. There was also uncertainty about the mapping process and how the noise contours in the map released this year would differ from those in the previous map, which was released in 2015.

Related After Years of Planning, F-35s Land in Vermont

After Years of Planning, F-35s Land in Vermont
By Kevin McCallum
Off Message

Overall, the new map, which takes into account the arrival of the F-35s, shows many more homes subjected to high levels of noise. But there are a few places where noise levels are projected to drop.

For example, a seven-unit condo development on Lily Lane in South Burlington that was formerly assigned to a peak noise category will now qualify for soundproofing because the line in the new map changed, Longo confirmed. The airport bought the properties for $2 million in 2016 and 2017 but instead of demolishing them rented the units to airport workers. Now the plan is to soundproof them and sell them, Longo said.

The current sound map forecasts a more elongated noise pattern, based partly on military data suggesting the F-35s will use noisy afterburners only 5 percent of the time. Opponents of the F-35 dispute that assumption and say even more homes could be affected by unbearable noise. The U.S. Air Force stands by the data, and so does the airport, Longo said.

After the full complement of F-35s operates for a year, the airport will undertake the creation of yet another noise map — one that could have new implications for homeowners in the flight path.