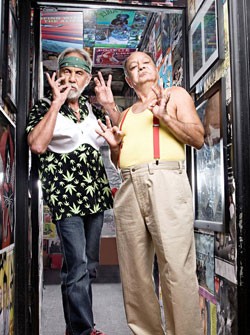 It’s 7:20 p.m. EST on a recent Friday, and I’m trying to call Tommy Chong, of Cheech & Chong renown, at his home in California. But I’m not having much luck. His agent gave me three numbers to call, none of which seems to be working. Five minutes pass. Then 10, 15. It’s now almost 8 p.m. and, after several attempts, I worry the interview may be a bust. I wonder if one of the world’s most famous stoners simply got baked and forgot about me. I sort of wish I still smoked weed.

I give it one last shot. The phone rings five or six times. I’m about to hang up before it goes to voicemail (again) when a familiar voice appears on the line.

“Oh,” he says in his light Canadian twang. “My phone was in the other room. I guess I didn’t hear it.”

“Ha. I was worried you got stoned and forgot about me,” I joke. Sort of.

“Aaaanyway,” I say, changing the subject. “Why don’t you tell me a little bit about your show?”

On Saturday, April 21 — the day after 4/20 — Cheech & Chong will appear at Memorial Auditorium in Burlington, performing their act “Get It Legal.” As Chong explains in a rather rambling, tangential fashion, the show is a career retrospective. It begins with a question-and-answer session, then the comedy duo run through a selection of greatest, ahem, hits, including scenes and songs from their albums and movies such as Up in Smoke and Nice Dreams.

In addition to bits such as “Dave’s Not Here,” “Basketball Jones” and “Santa Claus and His Old Lady,” the show also features a new song, “Get It Legal,” written specifically for the tour. It doubles as a sort of stoner-awareness session in the ongoing push to legalize marijuana, which Chong optimistically thinks could happen nationwide by the end of President Obama’s second term, should he be reelected.

“After he gets in, he won’t be worried about a second term,” says Chong. “So he’ll be able to throw the hammer down on all those guys.”

“Those guys” presumably include John Ashcroft, who as the United States Attorney General in 2003 organized a massive sting that sent Chong to jail for nine months after he was convicted of distributing drug paraphernalia through his company Nice Dreams. Chong’s crime? Shipping a water pipe across state lines. It was a felony offense.

“I don’t know anyone who thinks the war on drugs is working,” Chong says. “Even the staunchest allies, they’re having second thoughts. So there’s only one thing to do when a war is a failure, and that’s get out of the war. Declare victory and bring the troops home.”

Ironically, by arresting Chong, Ashcroft and his cronies made him a martyr.

“You can’t buy that kind of credibility,” says Chong, adding his jail time has done wonders for his career. “I’m very proud of it, man. When I do my show, I make a point to mention it. Hell, I bring it up unprovoked at dinner parties.”

He also brought it up on a recent appearance on the Fox News program “Geraldo at Large,” hosted by Geraldo Rivera. Also appearing on that episode: ultraconservative blowhard, er, commentator Ann Coulter, who took Cheech & Chong to task for their views on legalization.

“She’s scary, man,” says Chong of Coulter. “But it’s all phony. It’s all a show. They just say things to make people upset and get ratings. That’s a really unhappy bunch at Fox News.”

He tells a story about an exchange with another Fox News pundit, Bill O’Reilly.

“I said, ‘Bill, do you ever smoke pot?’” Chong recalls. He says O’Reilly, in all his characteristic bluster, was indignant and denied ever smoking. “I said, ‘Well, that’s why you’re always so angry.’”

One reason for Cheech & Chong’s long-lasting appeal is that they play up taboos associated with drug culture, portraying stoners as lovable heroes and authority figures as villains. That begs the question: If weed is legal, doesn’t that put them out of a job?

“It puts me on the golf course,” says Chong. “I wouldn’t mind that at all.”

Wait a second. Tommy Chong plays golf? Am I stoned?

“What’s your handicap?” I ask.