In the Wake of Arson, the Congregational Church Reaches Back for Its Future | Religion | Seven Days | Vermont's Independent Voice

In the Wake of Arson, the Congregational Church Reaches Back for Its Future 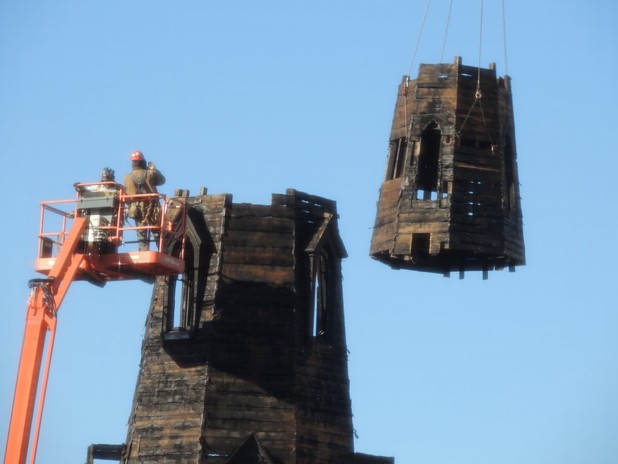 When the College Street Congregational Church in Burlington was going up between 1863 and 1866, its dramatic height didn’t impress everyone. “The roof is almost finished,” the grocer Albert Peirce wrote in an 1864 letter, cited in a recent church history written by members, “but the walls are so low and the roof so large and high, it looks like a boy with his father’s hat on.”

More than 150 years later, that profile is one of the most beloved in town — or was, until an arsonist burned the spire a month ago. The weather cap that now tops the formerly elegant steeple marks the end of emergency remediations. It’s also a jolting reminder of just how much was lost.

“[The church] truly is a downtown landmark,” says Ann Cousins of the Preservation Trust of Vermont, where she is the Historic Places Revolving Fund director.

“Frankly, so many of the churches in downtown Burlington are just amazing architecturally,” Cousins adds. But the Gothic Revival structure on College Street stands out for its masonry construction, its contrasting yellow and gray stone — the latter forming that distinctive quoin pattern — and its red-slate roof punctuated, unusually, with small dormer windows.

And, of course, the missing octagonal spire, which reached 114 feet and housed, from 1878, a bell and one of the first illuminated clocks in New England.

The guardians of the College Street Congregational Church are confident that spire will rise again. They are aiming for a meticulously historical restoration, pending insurance agreements.

The impetus does not come from some outside obligation, such as Burlington’s strictures on replacing the building materials of historic residential and commercial properties. Churches are exempt from city and state ordinances, and this church’s listing on the National Register of Historic Places doesn’t obligate its owners to retain historical character. The desire to do so simply appears to be a given for supporters of the church, including not only its leaders and congregation but also locals who consulted the lighted clock face regularly.

“The hope of the [church’s] restoration committee is to have it look exactly as it did,” says Jonathan Farrell, a church member. He is the committee’s liaison to the project’s architect, engineer and contractor — respectively, Ann Vivian of GVV Architects, fellow Burlington-based company Engineering Ventures, and J.A. Morrissey of Williston.

Farrell is an avowed “preservationist” who used to be in the architectural salvage business; he now works for the Committee on Temporary Shelter. On a recent Saturday morning, he meets with Seven Days for a tour of the damaged church.

Farrell begins by pointing out that the church’s leaders have always pursued historically sensitive repairs. In its most recent restoration, completed in 2009 by Vivian and Morrissey, crumbling gray-limestone quoin blocks, originally from the Fisk Quarry on Isle La Motte, were replaced with blocks quarried from the same seam farther north in Canada.

The striking yellow sandstone blocks, quarried from Willard’s Ledge off Shelburne Road in Burlington, had held up. But the load-bearing walls they formed had begun bowing, putting stress on the chestnut rafters of the sanctuary ceiling, so discreet steel cables were stretched between rafter buttresses to prevent further spreading.

The steeple, meanwhile, has seen “continuous repairs over the century and a half it’s been there,” Farrell says. He notes that the steeplejacks who did the job in 1943 left their names carved in the wood beams. Farrell saw the marks regularly: He climbed the steeple twice a week to wind and oil the clock, a Howard & Company model that was badly damaged in the fire. (The bell remains sound.)

Because the steeple’s top stairs were made of wood, firefighters had to douse the flames from the exterior, resulting in tons of water spilling down into the balcony, which was already damaged from a 1994 arson attempt. To prevent collapse of that choir-loft-like structure, they punched a hole in its solid, carved-chestnut railing. The water then poured onto the sanctuary floor, fortunately missing the altar and organ. It soaked through the carpeted chestnut flooring to the basement, which had been remodeled and expanded in that 2009 job.

All mechanical and electrical systems lining the basement ceiling will have to be replaced, Farrell points out, standing in the stripped and moisture-treated rooms that formerly housed a YMCA daycare for 30 infants and toddlers. The congregation hopes to save the floorboards above, at least, because of the rarity of chestnut. (A blight caused the trees to all but disappear by 1940.)

As materials go, the red-slate roof may be the most precious, according to Tom Visser, director of the University of Vermont’s master’s degree program in historic preservation. “That is something of great rarity,” Visser notes — even in Burlington, which, he says, has “one of the best collections of slate roofs in the country.” Red slate is “the most difficult slate to quarry,” says Visser. It has only one source in the country — in Washington County, N.Y., not far from Rutland — so it’s “very expensive.”

Nevertheless, says architect Vivian, “It is our intention to use the same red slate.” Further complicating the restoration, she notes, “each piece got smaller as you went up — a device they used to make the steeple look taller.” Evergreen Roofing in Burlington documented each of the slate tiles’ diminishing sizes and shapes before the burned spire’s demolition in order to reproduce the pattern exactly.

Whether the team can replicate the way the octagonal spire was attached to the rectangular tower will depend on engineering decisions regarding modern wind and earthquake building codes, Vivian notes. The nature of the 1866 construction was a surprise to master timber-framer Jan Lewandoski of Greensboro Bend, who assesses damaged historical barns, bridges and churches around the state. “I expected to find long iron rods reaching down into the church. Those are usually floppy by now, because metal bends,” Lewandoski says.

Instead, what he found was “a very good and sophisticated system” of 30-foot timbers that anchored the spire by running down through the tower’s two floors and into the foundation. The wind-resistant structure was still doing its job 150 years later. “Wood doesn’t shrink longitudinally over time,” he explains.

Lewandoski’s assessment was funded by the Preservation Trust of Vermont’s technical-report grant fund, which also sent a masonry expert to examine the tower’s yellow stone for damage. And the PTV helped the church secure a $5000 grant for further consultation from the National Trust for Historic Preservation’s emergency fund, according to PTV’s Cousins.

Help is coming from many parts of the community, too. Burlington Ensemble, one of several classical groups that perform regularly at the College Street church, put together a fundraising concert on November 17, at which David Neiweem led an open-call group of 35 musicians and 70 singers through the first and last movements of Beethoven’s ninth symphony. “B9,” as BE’s cofounder, Michael Dabroski, called the concert, raised nearly $2800 for the restoration. The money will augment the restoration fund the church launched on its website.

Meanwhile, many have stepped in to help the stranded congregation. Temple Sinai in South Burlington offered its space for services, Champlain College cleaned its empty Ethan Allen Center up the street to house the daycare and the Burlington Free Press has lent church officials office space.

Farrell remarks on the community’s and congregation’s “moving-forward attitude.” That seems appropriate, given the church’s legacy. It formed in 1860 when a few dozen members of Burlington’s First Congregationalist Church broke away from that institution’s conservative Calvinist leadership to pursue work on ending slavery and supporting women’s rights.

Indeed, according to the church’s current interim minister, Rev. Charles Purinton Jr., “Part of the reason for founding the church was getting the vote for women.” In 1874, the church even changed its bylaws to mandate that half of its six deacons, or spiritual lay leaders, be women.

The First Congregationalists built their Greek Revival church in 1842 on South Winooski Avenue, where the imposing, all-white structure still stands, topped by a miniature replica of a Greek temple. The College Street church’s bold choice of a red-yellow-gray color scheme, one could argue, visually represents its rejection of conservatism and embrace of community issues. The community, in the wake of the arson, continues to return the favor.

Contributions to the church’s restoration fund can be made at collegestreetchurch.org.

The original print version of this article was headlined "Steeple Solutions"