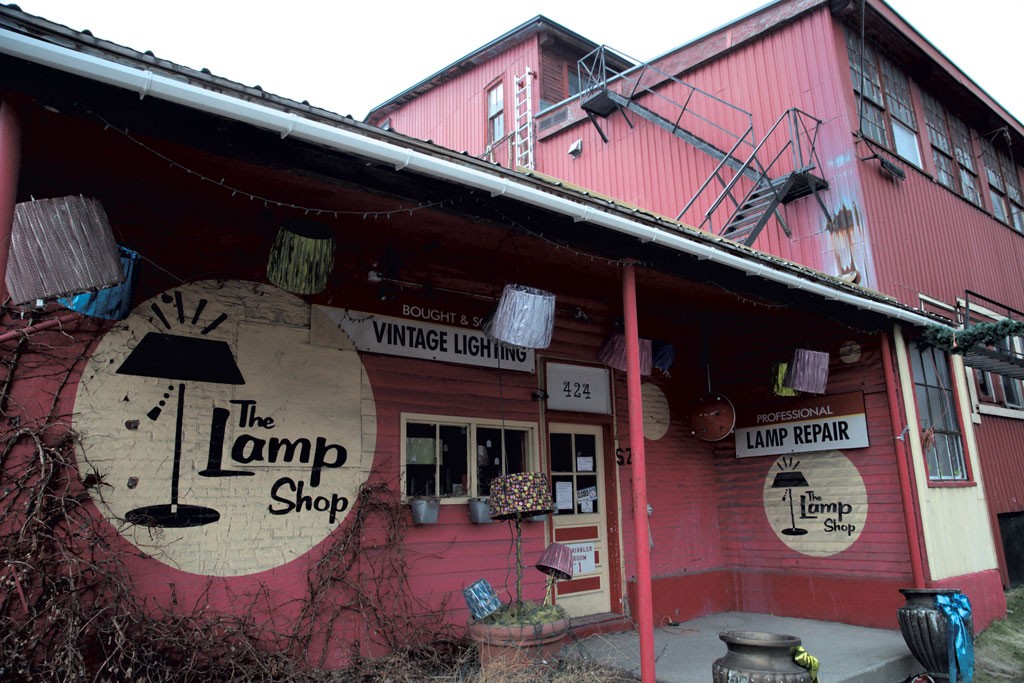 On February 1, Liz Segal got a call from a maintenance worker who informed her that an "incident" had occurred at her business, the Lamp Shop. She arrived at the building on Burlington's Pine Street to discover that a burst pipe overhead had drenched her collection of vintage shades and light fixtures. Light bulbs were floating in rivulets on the floor.

"My husband called the insurance company immediately," Segal recalls. "I just walked around saying, 'Oh my God, Oh my God.'"

Recently she surveyed more than 650 damaged shades in a dusty storeroom above her shop. Mold and water stains have made them unsellable, but Segal still hopes to find an alternative to throwing them out. In addition, 458 fixtures got wet; she hasn't yet determined how many need repairs.

Segal is making the most of the misfortune. "We can just start from scratch," she cheerily notes, showing a reporter a drawer full of fabric samples and gesturing toward freshly painted walls. She also points out a shower cap tacked to the wall — someone had passed "the hat" around the building so other tenants could pitch in for what the insurance company didn't cover. They raised nearly $500. The business has limited hours Tuesdays and Thursdays, and Segal hopes to reopen full time in about a month.

The Lamp Shop is located on the ground floor of a centenarian structure called the Howard Space Center at the corner of Pine and Howard streets. The abandoned brush factory was converted in the 1970s into a warren of more than 30 artist studios and small businesses. Why the pipe burst is still under dispute, but it's probably safe to assume that it wouldn't have happened in a newer building with modern infrastructure.

But Segal, who's been there for 15 years, said she's never considered moving. Like many of her fellow tenants, she's fallen in love with the funky old Howard Space.

Rent is enviably cheap here — three woodworkers share a spacious workshop for $800 a month. And it's in the heart of Burlington's South End Arts District, where, over several decades, entrepreneurs and artists have colonized a former postindustrial wasteland. 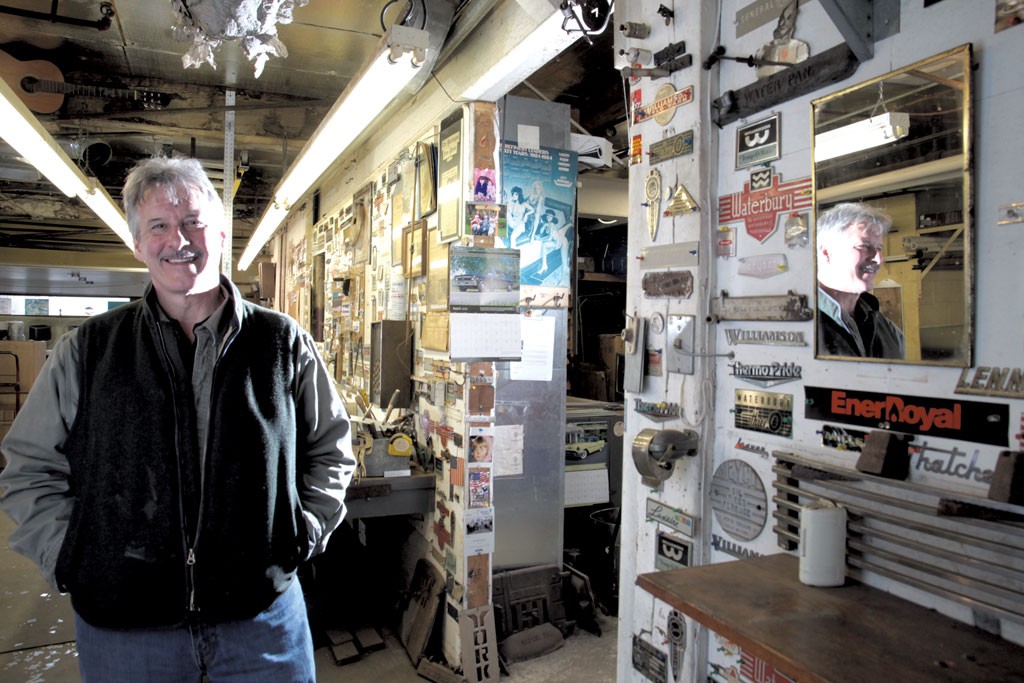 Tenants range from appliance repairman Jay Richland, who's worked there for nearly half a century, to Tim Danyliw, who recently moved in to make meditation drums out of propane tanks. The Howard Space exemplifies the neighborhood's eclectic mix of enterprise — or, as the South End Arts and Business Association puts it, is "fusing art + industry."

Lending a hand — or a table saw — is part of the complex's collective culture. A graphic artist commissions a bookshelf from a woodworker. A furniture maker upstairs snags scrap wood from Sterling Hardwoods downstairs. Segal makes lamps with stained glass from AO Glass Works, across the alley.

Steady development over the past few years in the South End has stoked concern that gentrification and rising rents will snuff out the district's creativity and character. Mayor Miro Weinberger has made addressing the city's housing crunch a cornerstone of his second-term agenda. Pointing to surface parking lots and vacant buildings in the area, his administration suggests the South End holds promise as a site for new housing.

Last summer, the city started a yearlong public-input process called planBTV South End to "proactively prepare for the expected continued growth." City officials say they hope to come up with a "collective vision" for the district, but some locals are skeptical that their feedback will be heard.

The most contentious discussion centers on the Enterprise Zone, an arts and business district along Pine Street that includes the Howard Space. Current zoning law prohibits housing there, and people vigorously resisted when the city began pursuing changes that would lift the restriction. One of their concerns: that housing would be incompatible with the commercial activity because new residents might take issue with bands practicing late at night or metalworkers fabricating in the early morning.

In response to the outcry, Weinberger agreed to put the change on hold, pending the outcome of planBTV South End. He's also made assurances that his administration will prevent "over-gentrification." Precisely how is unclear.

As the South End has evolved, manufacturing buildings have undergone major makeovers. The former Maltex cereal factory and another brush factory are now industrial-chic — a stylish office building and Dealer.com's headquarters, respectively.

The Howard Space, however, has stayed unabashedly shabby. And that condition gives its tenants a sense of security that other South End artists and business owners don't necessarily share. If someone wanted to convert it to condos, they would almost certainly have to start from scratch, and the owners, the Unsworth family, assure tenants they don't intend to tear their building down.

Even so, many Howard Space inhabitants have strong views on the subject of South End development. Some basement walls in the building offer evidence: A large blue canvas banner depicts Weinberger as a malevolent magician, talking out of both sides of his mouth. On one side he proclaims, "The city has no agenda! We want to know what you want!" On the other: "More housing, period!"

Another statement coming out of the mayor's mouth: "Tell us what makes you smile about the South End. We will try not to build a hotel over it." (This was inspired by a planBTV exercise that asked participants, "What about the South End makes you smile?") A second canvas, in pink, depicts "Art Land," a fictional amusement park erected on the "last remaining undeveloped space on Pine Street." The artist behind these paintings, Genese Grill, has been an outspoken critic of proposals to put housing in the South End's Enterprise Zone.

Amey Radcliffe, co-owner of Gotham City Graphics and a longtime Howard Space occupant, is also opposed. She was one of a handful of artists who received grants through planBTV South End to create works that would invite local artists and other tenants to engage in the process. Radcliffe posted different proposals on a wall and encouraged people to signal their preferences by slapping round, traffic-light-themed stickers — red, yellow or green — next to each statement. The proposal with the most red? "Build more housing," which garnered 241 such stickers.

Radcliffe said she keeps hearing planners talk about "market forces," as if there's no choice but to submit to the demand for new housing. She rejects that notion. While the discussion makes her anxious, Radcliffe said it's also sparked "an appreciation for what we have."

At the turn of the 20th century, Enoch Bangs Whiting and his son moved the factory in which they manufactured bristles for brushes and brooms to this sprawling corner building at Pine and Howard. A fire consumed the place in 1902, but the Whitings rebuilt it. Thomas Unsworth took charge of the company soon afterward, and his son, Ray, managed the plant. Eventually, the bristle operation moved across the street into what is now Dealer.com, and the so-called Howard Space Center was sold out of the family. Ray Unsworth bought back the building in about 1970 and converted it to commercial rental spaces.

It's easy to get lost in the Howard Space's catacomb-like halls, and the layout feels haphazard when you walk through it. Ray Unsworth, who died in 2010, had erected walls wherever his original tenants requested them. Early occupants included a blacksmith, an autobody shop and a bagpipe maker.

Unsworth's children, Karen and Stephen, now manage the Howard Space, along with the rest of the family's real estate holdings. Stephen's son James recently joined the business. They also own the other buildings on the east side of Pine Street between Marble Avenue and Howard Street. That includes the Mapleworks building, a former sugar-production facility that now houses Great Harvest Bread Co.; and the long, single-story brick building in which ArtsRiot, the SEABA Center and Speeder & Earl's Coffee have set up shop.

The Howard Space Center — with a slapdash exterior of red corrugated metal, brick and wood — is the quirkiest structure on the block. Inhabitants tolerate — even embrace — the building's oddities. Rusted contraptions hang from the ceiling, and pigeons roost in the rafters. Radcliffe says she still finds horsehair in the cracks of the warped wood floors. Richland attributes the "burnt toast smell" to those factory days.

Erin Hanley, a fine furniture maker who worked in the building in the 1980s and returned in 2007, has observed that grease from bristle production has seeped into the floorboards.

Visits to the workshops and artist studios inside the Howard Space leave the impression that the tenants are competing for the most creative clutter. Some spaces, such as Radcliffe's, feel futuristic, with iridescent wall displays and metal sculptures dangling from the ceiling. Others seem anachronistic. Richland's displays a washing machine manufactured circa 1950.

Richland started working at his father's appliance shop in 1972. He's the only one of nine siblings who stayed with the family business. Working out of a tiny office that's packed with spare parts and paperwork, Richland has weathered ups and downs. In the electronic age, he says, appliances have become more complex and harder to repair. At the same time, the machines' quality has declined, he says, meaning that it's often cheaper for people to buy a new microwave rather than fix the broken one. Richland still has loyal customers, but, he says, "After 43 years, a lot of them have passed away."

Downstairs, Brad Mitchell remembers the exact date he drove with his father to pick up a load of secondhand sheet metal to start their business: December 24, 1974. Now 60, he has been fabricating at Mitchell Sheet Metal in the Howard Space since 1980. Mitchell installs furnaces and ventilation units, too. "Bradley is a dying breed," says Kevin Chamberlin, a maintenance man who regularly drops in to Mitchell's workshop for coffee.

On a recent afternoon, Sterling Hardwoods and adjunct Sterling Furniture Works co-owners Bruce Schulman and David Wilson linger in the sun after lunch at a picnic table outside their shop. They were in their late twenties when they went into business together in 1979. In 1984, they moved into their current spot, a warehouse grafted onto the Howard Space. Business boomed in the 1980s, then nearly petered out in the following decade. "We just stubbornly have stayed," says Wilson, who is clad in corduroys and a faded tie-dye T-shirt. Schulman wears Carhartts with suspenders.

He and Schulman aren't too worked up about South End development discussions. "Whatever happens, we'll just roll with it," Schulman says.

On the surface, the longtime woodworkers have little in common with the abstract painters and graphic artists in their midst. And given the Howard Space tenants' varied backgrounds, it's not surprising that they hold different opinions about how the South End should evolve. But the scrappy pioneers who've set up shop in the old brush factory do share one thing: affection for their humble accommodations and a determination to remain there.