In the Old North End, Arts Organizations Face a Move 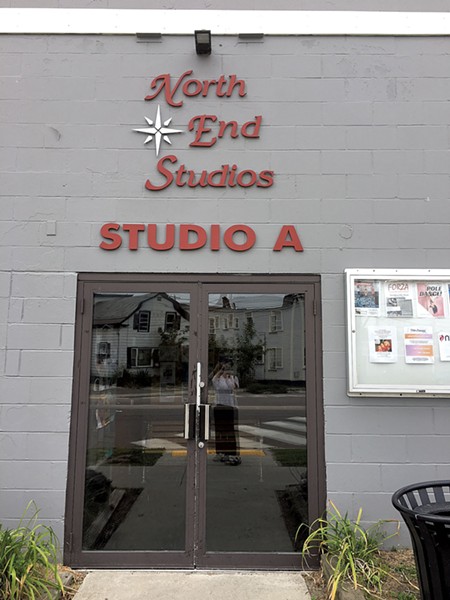 From the sidewalk outside 294 North Winooski Avenue in Burlington, passersby can smell the sawdust from renovations for the forthcoming Little Morocco Café. It will be a radical transformation of the former headquarters of the Vermont Workers' Center. The new restaurant, along with recently opened Knead Bakery on the Archibald Street side of the building, seems to embody the kind of changes that property manager Jacob Hinsdale hopes to make over the coming years.

Some tenants of the onetime home of Fassetts Bakery are being told that when their lease is up, it won't be renewed.

That's the message Off Center for the Dramatic Arts received in late spring and announced last week in its newsletter and on its website. This is not an eviction; Off Center's lease runs until the end of May 2019, says board president Laura Roald. That gives the organization plenty of time to look for a new home for the 65-seat black box theater, which opened in the Old North End building in 2010. But space is an increasingly scarce — and costly — commodity in the Queen City.

"We've been trying to digest this and planning our next move," Roald says. "We definitely are looking for a new space. We'd like to stay in the Old North End, but we're open."

The Off Center board knows that Main Street Landing Performing Arts Center just renovated its Black Box Theatre, which is larger and more versatile than the theater's current space. But MSL rent is double what Off Center currently charges, Roald says, "and there's a whole level of artists who can't afford that.

"Our goal has clarified since the beginning," she continues, "but really what we take pride in is being able to offer affordable space with lights, seats — all that we've acquired over the years."

Roald adds that this "kick in the pants," though initially upsetting, "is accelerating what was in our five-year plan. We want ... to be more visible and accessible — for people to find us more easily, being able to partner with us. We're going to consider this an opportunity."

Off Center will stage its October Fringe Festival, and other shows scheduled through spring, in its North Winooski Avenue quarters.

The theater nonprofit has subleased its modest space from Ben Bergstein and April Werner, who have been in the building since 2008 and operate North End Studios — studios A, B, C and an event hall. In addition to putting on the annual Vermont International Festival at the Champlain Valley Exposition — last December marked the 25th — the couple keeps busy renting spaces in the ONE. Very busy, according to a jam-packed handwritten calendar on an office wall.

"We are driven by what people want to do here," says Werner. That includes dance and fitness classes, talks, meetings, and an array of community events. Last weekend, a local couple got married here. And Werner notes what she calls "a resurgence of performance" — including the Nightshade Kitchen series presented by Foam Brewers, which features music and food.

Rents start at about $75 an hour and vary by event type and number of attendees, Bergman says. Professional lighting and sound equipment are in-house, as are tables and chairs, a kitchen, and portable mirrors on casters. What North End Studios does not have is an alcohol license, but Werner notes that it partners with a local bar to handle drink catering.

All of this will be available until North End Studios' lease is up, at least four years from now.

While Hinsdale's newest tenants might indicate a preference for food businesses, the vision he articulates for 294 North Winooski sounds similar to that of Werner and Bergstein. "We are looking for a diverse and interesting building, from dancing to eating, a place that the community can enjoy," he says by phone. Hinsdale adds that CCTV Channel 17/Center for Media & Democracy — an upstairs tenant since 1990 — is "an incredibly important part of the mix."

CCTV executive director Lauren-Glenn Davitian confirms that Hinsdale has said nothing to them about their lease.

In Bergstein's view, "This is a typical gentrification thing." He suggests that Hinsdale "wants to make his mark as a real estate person." North End Studios and the other arts-related enterprises in the building, Bergstein says, "are in here under another premise — community oriented, not profit motivated."

Yet he doesn't blame Hinsdale. "Jacob's passion, his point of view, is that he's doing something he thinks is economically good for the Old North End," Bergstein says. "It's his building. We live in a capitalist society."

If Bergstein is taking a philosophical attitude, it helps that he and Werner have already "put down roots" in St. Joseph School just blocks away. Purchased by Champlain Housing Trust in 2017, the former Catholic school houses several community groups, including the Association of Africans Living in Vermont, Very Merry Theatre and Robin's Nest Children's Center. Bergstein and Werner manage a sizable area that includes the cafeteria and kitchen. Though the space is configured differently, it could accommodate some of the events and activities that take place in North End Studios.

"Besides St. Joseph, we will look for more space," says Bergstein. Leaving North Winooski Avenue, though, is still years away.

Meantime, the Off Center team is actively seeking a new home and, says Roald, "looking for any partners who might be interested."