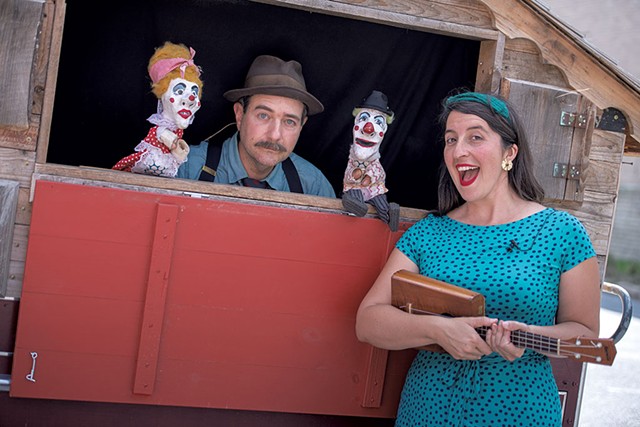 A warning for audience members at Modern Times Theater's Punch and Judy puppet shows: People in the first two rows may get wet. At a recent performance at the Albany Public Library, 30 or so rapt children and their chaperones squealed with surprise and delight as characters in the show romped, frolicked, quipped, tried to eat each other and playfully sprayed water into the crowd.

Most of the 60-minute set was dry — at least literally. Figuratively, the gags and musical numbers were anything but. Calling on the 300-year-old tradition and domestic foibles of hand puppets Punch and Judy, the forebears of most modern puppet theater, Modern Times revamps the concept with whimsy and effortless charm.

"We always feel like the common denominator is humor," Modern Times' Justin Lander said while sitting on his East Hardwick home's stone patio. He cofounded the company with his wife, Rose Friedman, in 2007. The couple's 1790s farmhouse is like something out of a storybook, replete with livestock, gardens and an attached greenhouse overflowing with vine-ripened tomatoes.

"If you can get people all laughing together, they can be together without being so conscious of what divides them," he continued.

Friedman and Lander met while working with Glover's Bread and Puppet Theater, whose influence is clear in their craft as entertainers. Lander creates all his puppets from salvaged materials and papier-mâché.

"They're fighting against the most powerful corporations of our day." Steven Gorelick tweet this

Fostering community is one of Modern Times' primary objectives. Living in the Northeast Kingdom, one of Vermont's most rural areas, the pair stresses the importance of togetherness. But they also want to create a self-sustaining entertainment economy in their own and others' backyards. In a world ruled by streaming platforms, mobile gaming and social media, Modern Times aims to reintroduce original, organic live performance.

"Is there some way that we can provide a lot of our own entertainment and theater and music here without having to drive far away?" Friedman asked.

One way the couple is reshaping the town's entertainment economy is through a developing partnership with the Vermont State Grange. The National Grange of the Order of Patrons of Husbandry, known as "the Grange," is an agricultural and social organization that sprang up after the Civil War, with meetinghouses throughout the United States.

Friedman and Lander are working with Caledonia No. 9 Grange Hall, built in 1909. Members of the gorgeously preserved, century-old structure have, in recent years, struggled to maintain its vibrancy. It's uninsulated and needs some interior renovations, as well as accessibility upgrades. It also has no parking. When it hosts events, attendees park on the side of the road and across the street at the First Congregational Church of East Hardwick.

But the Grange's main obstacle stems from a cultural shift in how people socialize and consume entertainment.

"Many of the Granges are having a hard time defining their purpose in the modern era," said Steven Gorelick, who holds the ceremonial title of Caledonia No. 9's "gatekeeper." Speaking by phone, he explained that the kinds of gatherings the Grange once held — sing-alongs, group games and other community activities — aren't as attractive as they once were. But Modern Times' work is igniting a spark.

"What Rose and Justin are doing is very much in the spirit of the old Grange," Gorelick continued. "They're fighting against the most powerful corporations of our day, which include Amazon, Netflix and Disney, and the whole attention economy driven by the tech companies."

Recently, Friedman and Lander hosted a bingo night and donation-based dinner at the Grange. To add a retro feel, they scored an old-fashioned bingo setup from Craigslist, complete with wire tumbler cage and light-up board.

As host, Lander drew from his past experience as an auctioneer at charity auctions. He has no training in the role, he admitted; he's more like a comedian pretending to be one.

"The auction's the cracker, and the comedy's the cheese," he quipped.

Friedman joined the Grange when she saw its potential for hosting the kinds of creative opportunities she and Lander want to foster.

"Is there a way to build a community center ... through arts programming?" Friedman wondered.

She said they aim to update the Grange and its offerings to reflect current cultural attitudes and values. 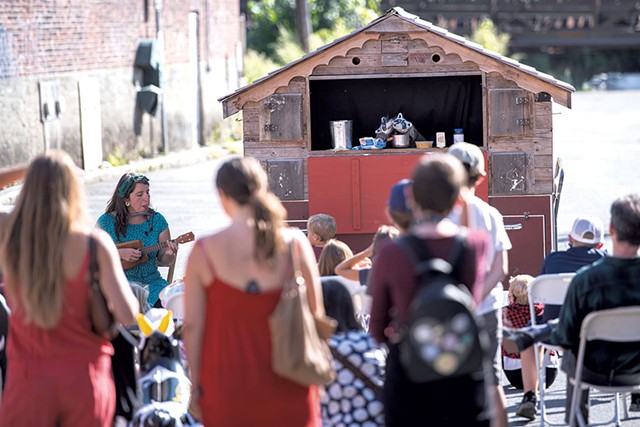 "There's still somewhat of a living culture of memory ... of many generations of a family living in one place," Friedman said. "If artists step in and take the old, defunct Grange hall and make something happen, does that mean that they're going to lose the key and [the Grange will become] something that they can't afford?"

To address this conundrum with their art, Friedman and Lander are creating a new performance piece called "We're Not From Here," funded through a newly awarded creation grant from the Vermont Arts Council.

"The main themes include rural gentrification and being from 'away,'" Friedman wrote by email. The show will incorporate puppetry, as well as vaudeville-inspired sketch comedy scenes. Once it's complete, they hope to tour it at small venues around the state.

"[It's] a kind of synthesis of everything we do," she continued.

Gorelick observed that developing a self-sustaining entertainment economy is consistent with the Grange's original agricultural values. Just as many homesteaders in the area are producing their own food, Modern Times wants to feed people with homegrown entertainment.

"It's all about local self-reliance," Gorelick said. "That's an attractive stance in the Northeast Kingdom for a lot of people."

See Modern Times Theater's Punch and Judy show Thursday through Sunday, September 16 through 19, at the Tunbridge World's Fair, $10-15 fair admission; and on Sunday, September 26, at the Highland Center for the Arts in Greensboro, free. moderntimestheater.com