In the Company of Meat

Vermont Meat Company spreads the joys of the flesh 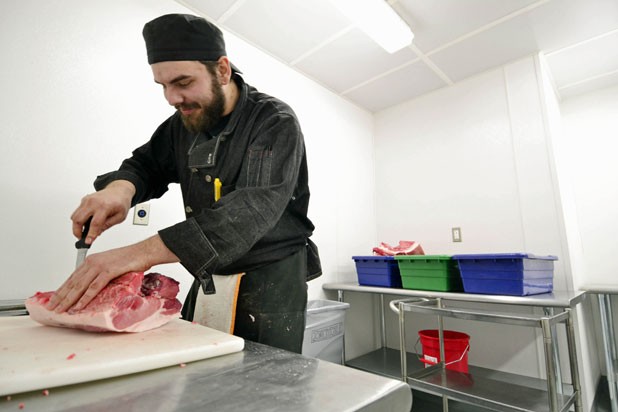 Jacob Finsen needs a new phone. “My Android screen is not necessarily doing so well,” he says. Plenty of other 29-year-olds have the same problem, but not for the same reason. Finsen blames pig grease for his ailing device.

As an avowed pig man, the facility manager of the Mad River Food Hub knows that’s an occupational hazard. He describes himself thus while breaking down a hog from Von Trapp Farmstead for well-marbled cuts that he and the Hub’s founder, Robin Morris, will share with potential clients. The five other pigs delivered earlier this week will go to another of Finsen’s projects, the Vermont Meat Company.

The VMC is the baby of three meat lovers: Morris, an English transplant and former chief financial officer of American Flatbread, who pinpointed the market niche; Finsen, who brings the butchering skills; and Joey Nagy of the Mad Taco in Waitsfield, who’s currently the company’s sole owner. Finsen is volunteering his efforts for now, but Nagy says his sweat equity could soon make him an owner.

All this is in service of a lofty goal: conquering Vermont, then the world, with high-quality Green Mountain-grown meat. Nagy hopes to expand to larger markets, including southern Vermont, as soon as a week from now. “We’re not going to stop until the state is saturated with sausage. We’ll make our state 30 percent meat,” he jokes.

Spicy chorizo and tangy garlic and breakfast sausages from the VMC appeared in some local markets not long after the Hub opened last October 17. They’re based on recipes that Nagy and Finsen created together, but what makes these sausages unique is the pork.

The pig Finsen is processing right now ate a very special diet: the whey byproducts of Von Trapp Farmstead’s Oma cheese. If Nagy gets his way, Vermont will be known one day for its whey-fed pork, the same way Spain is celebrated for its acorn-fed jamón ibérico.

Translation: The pigs’ diet yields juicy sausage with an almost creamy texture. The links currently in stores come from pigs raised at Jasper Hill Farm in Greensboro, where the cheese-making Kehler family has enjoyed dining on whey-fed pork for several years.

The first step to introducing the world to this delicacy is expanding VMC. The sausages — currently sold at Montpelier’s Hunger Mountain Co-op, Waitsfield’s Mehuron’s Market, and Healthy Living Market and City Market in Chittenden County — are just the beginning. Once the state has accepted the Hub’s HACCP (hazard analysis and critical control points) plan for a smoker, probably in mid-February, the company will add bacon to its product line.

Finsen and Nagy know the rashers will be flavored with local maple and not too sweet, but beyond that, Nagy admits, they’re in the planning stages. “Jacob and I still have to have our bacon-off,” he says. “Then we’ll decide on our recipe.”

A spicy Italian sausage is also on the planning board, as is a bratwurst. Finsen says he’s “obsessed” with kielbasa and hopes to introduce one when the smoker is up and running.

Morris hopes the Hub’s kitchens and meat-fabrication rooms will have USDA certification within three months — Finsen has been busy writing applications. When that happens, says Nagy, the company will seek to sell its meat in New Hampshire and Massachusetts before considering further expansion.

Morris says projects like this are exactly why he created the Mad River Food Hub. Its northern cousin, the Vermont Food Venture Center, which recently opened in Hardwick, specializes in vegetable products and dairy-based items such as Jasper Hill Farm cheese. (It also has a bakery and equipment for larger-scale production.) In his region, though, Morris identified a need for meat processing.

He considers VMC the center’s pilot meat program and couldn’t be happier with the way it links several aspects of the local food system. “It’s a partnership between the farm, which in this case is Von Trapp Farm, Nacho [Villa, of still-nascent Vermont Whey-Fed Pigs], and the Vermont Meat Company and the Food Hub,” Morris says. “All these four organizations are making these products happen for the consumer. We mustn’t lose that fact that there’s a connection between all the components that makes it possible.”

Morris made one of those connections when he decided that Nagy, whose authentic taqueria is just across the street from the Food Hub, could be the perfect operations director. Nagy, in turn, recommended Finsen as a potential manager. “Jacob brings a unique set of skills,” says Morris. “Not only does he have slaughtering and butchering skills, but good all-around knowledge of food and food processing.”

Luckily, Finsen also knew a thing or two about building. He and Morris did most of the Hub’s construction themselves, finishing in August. Finsen describes the time as “a blur of metal studs and concrete grinders,” but he’s glad he now knows every nook and cranny of the facility, from the kitchen to the two meat-processing rooms.

That familiarity comes in handy when he assists customers, such as Joe Buley of Screamin’ Ridge Farm, who was making soups last Tuesday at the Hub to sell at area co-ops and the Vermont Farm Show. The share-and-share-alike aspect of the Hub was apparent as Finsen cut and ground pork chunks for Buley’s pork-and-beef-black-bean chili. Buley is producing the state’s first “legally” packaged meat soups, thanks to a HACCP plan Finsen wrote.

Finsen also lent Buley some salt. The chef-farmer had left a container at home and couldn’t replace it at Shaw’s, just a few feet away. Explains Finsen: “When you’re making inspected product, you have to use the same stuff all the time ... I can’t just run out and get juniper berries if I run out.”

This is all new to Finsen. Until now, he was a passionate amateur butcher. “This is my first time having this as actual employment,” he says. “It’s nice to do something you love to do. I was a painter, bartender and bouncer before this. It took a lot of things to pay for my hobbies, basically.”

Chief among those hobbies were raising his own heritage Jacob sheep (a coincidence, he swears) and rabbits — for meat — and running an on-farm slaughter service with his brother. The pair grew up in the White Mountains of New Hampshire, slaughtering six pigs a year with their chef father and breaking them down in the garage. Today, the brothers’ customers include Crop Bistro chef Tom Bivins, who acorn-finishes his porkers for nutty-tasting ham that he shares with friends and family.

Finsen was working as a bartender and “door tender” at Charlie O’s in Montpelier when he became acquainted with Nagy, the chef at Three Penny Taproom. The two struck up a friendship, largely based on their affection for the other white meat.

Late in 2010, Nagy left the Montpelier bar to open his taqueria, an homage to the Mexican flavors of his native southern California. Meanwhile, Morris had just convinced his former employer, Amerian Flatbread’s George Schenk, to sell him his walk-in freezers. These were the backbone of a project close to Morris’ heart — a place where Mad River Valley farmers could make value-added products.

“It’s about maximizing the income you could make,” Morris says now. “When you come into a kitchen or meat-processing facility, you can double and triple [the product’s] value. It’s an all-around plus, plus, plus.”

Even as the VMC expands beyond being able to rely on the state’s small haul of whey pigs, it will continue to buy 100 percent of its meat from Vermont farmers. “We very well could buy pork from out of the state or even out of the country, but it’s important to us to keep that agricultural sustainability going in the state,” says Nagy. “That’s our No. 1 goal.”

“Absolutely, it’s the best you’re gonna get,” adds Finsen. “That goes without saying.”

Nagy foresees eventually having two separate VMC lines: one featuring sausage and bacon made from conventionally fed Vermont pigs; the other specializing in cured products such as pancetta and guanciale crafted from the whey-fed porkers. The latter line will expand as more whey-fed pigs become available. It calls for special curing facilities, necessitating another HACCP plan and lots more work for Finsen.

Meanwhile, the largely self-taught facility manager will help farmers turn their animals into food and potential profit, whether they’re goats from Tannery Farm Cashmeres in Danville or yaks from Waitsfield’s Vermont Yak Company. Besides breaking down animals himself, Finsen teaches farmers to do it, using his own body as a living, breathing cuts-of-meat chart. “I worry sometimes that I’m freaking people out when I explain where butts are coming from, not having a cut sheet readily available,” he says with a shrug.

Once the Hub is USDA certified, Finsen and Morris hope it can reach out to local schools to teach high schoolers about agriculture. A chop or two of the pig Finsen is cutting today is bound for Paul Morris, the chef at Harwood Union High School in Moretown.

One of his goals, says Finsen, is to show students how much fun old-school butchering can be and make young converts to his aging profession. “It’s not every day you can get people excited about cutting meat, which is unfortunate” he says. “It’s a rewarding trade.”

Perhaps by the time the next generation is trained, Vermont Meat Company will be hiring.