A writer visits a local psychic to peer into her future 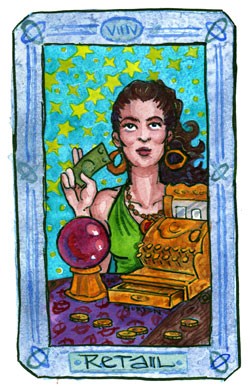 I have never sought the services of a psychic before — not because I don’t believe in the gift of clairvoyance but because I’ve never felt the need. I figure it’s best if I don’t know the future. I’d like to have a reason to get out of bed in the morning, and I don’t think knowing I’m going to die an early death is a good one.

Though I’ve never had a reading, I must admit to feeling some curiosity. Are some people actually imbued with prophetic powers? Does clairvoyance exist? Is there such a thing as extrasensory perception? If so, why don’t I have it, dammit?

To satisfy that curiosity, I decided to visit with downtown Burlington’s only shopfront psychic. Samantha Stevens (insert “Bewitched” jokes here) has been reading palms, tarot cards and crystal balls from her sliver of an office on College Street for about seven months.

The roadside office (lounge? salon? what does one call a psychic’s workplace?) is Stevens’ second location. Her primary place of business is a tidy clapboard ranch on Dorset Street. She wanted to expand her services to downtown Burlington, so when the College Barber Stylists closed, Stevens snatched up the spot.

On a recent weekday during the stultifying heat wave, I wander into Stevens’ office for my reading, sopping wet, my body a human salt lick. The office is adorned with all the kitschy trappings one might imagine in a psychic’s abode — tall tower candles, colorful geodes the size of bricks, vaguely occultish knickknacks. Still, I expected more — or at least some — crushed velvet draped on the walls and perhaps some New Age-y music floating like mist through the air.

But Stevens isn’t a caricature of a psychic. She is a woman of medium height with deep-olive-colored skin and dark brown hair swept back in a ponytail. On this day, she wears a white-and-navy-striped sundress and white flip-flops. Her 5-year-old daughter, also in a fetching sundress, fiddles with an iPhone in the corner.

Because I’m somewhat nervous that she’ll actually pull out a crystal ball, gaze into it and conjure some sort of hideous future for me, I choose the full tarot card reading at $45. Plus, the $65 crystal-ball assessment is a little out of my price range.

Stevens has been in the fortune-telling business for nearly 10 years, but she’s had the gift of soothsaying since she was small, she says. At about 5, she discovered her talent for seeing into the future. Her grandmother was also clairvoyant, she adds, and though her mother was not, Stevens’ ability was no surprise to the family.

We are sitting uncomfortably close on two armchairs covered in leather. My trousered legs stick to the upholstery. Stevens hands me a deck of tarot cards.

“Shuffle it and say your full name and date of birth,” she orders, her voice flat but for perhaps the slightest touch of annoyance.

I do as she says, then hand the cards back to her and watch her do her thing. I should mention that everything I know about tarot cards I learned by watching Mallrats. So I don’t really know what’s going on.

Stevens lays down a few cards and says she’s seeing that I’m a good, honest person but that I feel underappreciated. “Is that true for you?” she asks me.

“Well, yes. I guess,” I say. “But don’t most people feel unappreciated?”

She stares at me blankly, and I hope I haven’t offended her. I didn’t mean to call her gift into question; I simply wanted to imply that, because we all have gigantic egos, few of us feel truly valued.

Stevens slaps down a few more cards on the small round table where her laptop was just sitting. She says she sees that I’ll live a long life, I’ll be relatively healthy, and I’ll be taking a trip to a tropical destination in eight to nine months. Yes! Jackpot!

Slap, slap, slap. A few more cards on the table. Stevens tells me I’ve been pining for a lost love, and that love will contact me within the next month via telephone. Hmmm. Unless deep in my subconscious mind I’ve been harboring feelings for an ex, I’m not so sure about the accuracy of this part of the reading.

While we’re knee-deep in the love/romance portion of the reading, Stevens tells me that I will continue to be in a loving relationship and that I will have children. Two, in fact. She asks if I see this happening.

“Maybe,” I say, trying to dodge the question that every woman in her late twenties or early thirties is forced to field. “I mean, I like kids and all. I guess I haven’t given it much thought.”

“Yes, my partner is female,” I interject before Stevens gets a chance to say “gay” or “lesbian” or “big fat homo.”

“Oh, well, you could adopt, or whatever you do,” she says reassuringly.

I take a mental note that adoption is a possibility.

After that, Stevens informs me I’ll be leaving my job in a year for something bigger and better, and that I need to start eating healthily and exercising for something specific I’m going to be doing in four or five months.

Snowboarding in British Columbia? Hiking Kilimanjaro? I wonder what athletic adventure awaits me.

While I am happy, despite being underappreciated, and healthy, someone close to me is not. Or won’t be in three to five months. An older man in my life will have heart, lung or kidney problems. But it will be a minor bump in the road, Stevens says, not a major health crisis.

This I don’t want to hear. Until December, I’ll be worried sick about my father suffering a minor heart attack or developing a tumor in his lungs. I’m keeping my fingers crossed that it’s just kidney stones from all the soda he drinks.

Now, here’s the part that really creeps me out. After telling me about an older man’s impending health hiccups, and apropos of nothing, Stevens asks me if I’ve been sexually abused.

Thankfully, to my knowledge, I have not. But had I been a survivor of sexual abuse, I’m not sure how I would have taken this. I realize that psychics get pretty personal, but that’s verging on prurient.

I shake my head and tell her I haven’t been abused.

“Not verbal abuse or anything domestic?” Stevens presses on.

“Just some fights with my parents when I was a kid. Nothing that would qualify as abuse,” I say.

“How about your partner. Any sexual abuse there?”

I’m reminded that Stevens’ young daughter, who was earlier relegated to a back room, is still in earshot. I shift in my sweaty seat.

“That’s what the energy is telling me,” Stevens says.

Who’s to argue with their energy? Well, me, for one. While I don’t doubt the sixth sense that many people claim to have, I do think some of those psychic signals can get crossed.

At the end of my 15-minute reading, I hand over my $45 and head out into the steamy weekend that awaits me. Stevens’ prediction of a tropical vacation seems to have come true eight to nine months early.