A decade ago, Eric Hudson and his maintenance staff kept the grounds of the King George School in Sutton immaculate: lawns and gardens manicured, walkways shoveled and swept, fences regularly painted white. After all, the affluent and mostly out-of-state parents whose high-school-age kids attended the therapeutic boarding school in the Northeast Kingdom paid hefty tuitions on par with those at many elite private colleges.

These days, Hudson shows prospective buyers around the place; the 300-acre campus with sweeping vistas of the Green and White mountains has been on the market for almost a decade. Hudson is the sole caretaker and doesn't have much else to do at the shuttered school. One of his jobs is to keep the furnace running in the education building, aka "Eddy." Otherwise, the radiant floor heating pipes would freeze and buckle the foundation.

Hudson also cleans up after occasional vandals. More than once, he's discovered that someone has sneaked into Eddy and played with the fire extinguishers, or stolen equipment left behind when the school abruptly closed in 2011. Thankfully, no one has damaged Eddy's stained-glass windows, some of which bear the names Descartes, Galileo and Marie Curie. On the other hand, the front windows have repeatedly been shot out with BB guns.

"It's probably fortunate that I haven't caught anyone," Hudson said half-jokingly on a recent tour of the grounds with listing agent Daniel Maclure, owner of Century 21 Farm & Forest in Derby.

Given that the property has remained unused for a decade, the mostly unheated buildings are in remarkably good shape, albeit in need of painting and other cosmetic upgrades. Some of the structures date back to the 1920s. Nearly all were ungraded in the 1990s when the Brown Schools of Austin, Texas, bought the former dairy farm and converted it into a private coed boarding school.

Today, most of the 13 buildings have metal-seam roofs and modern windows, and all are structurally sound, Hudson said. They range from a small, one-room schoolhouse to a massive two-story horse barn. The latter, which sits on the upper campus a stone's throw from the Sheffield Wind Farm, was converted into a campus community center and recreation room with billiards, foosball and Ping-Pong tables.

On the lower campus, across the road from Eddy and adjacent to the Clark administrative building, there's a huge, three-story white barn topped with a cupola. Originally built to store hay in the loft and farm equipment below, the barn still holds rows of exercise machines left from its school days.

Decades ago, the barn was also used for maple sugaring, when farmers tapped about 5,000 trees on the property and gathered the sap using horses. According to Dianna Simpson, former Sutton town clerk, the barn's lower section was later converted into a factory for making maple candies, though it was never put into production. Nevertheless, the massive building along King George Road has been known ever since as the Candy Barn.

In all, this unique property, with its sprawling meadows, ponds, woods, dormitories, ball fields, and 58,000 square feet of assorted residences, offices, classrooms and outbuildings has much to offer prospective buyers. 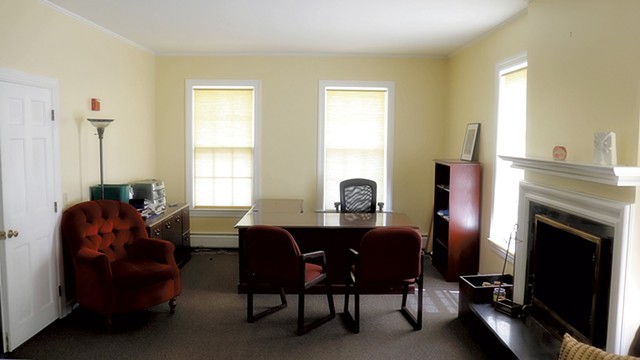 "If they find the right purpose for it, it's a bargain," said Hudson, referring to the $1 million asking price, reduced from a high of $2.5 million. What might that purpose be?

"That's the big question," he said.

It's not as though the KGS campus hasn't generated interest, said Maclure, who took over as listing agent three years ago. For a time, he said, Circus Smirkus of Greensboro considered moving its nonprofit youth operation there.

Other prospective buyers have included companies that run summer camps, nursing homes, residential treatment centers and schools for kids with special needs. The Vermont State Police used the grounds for training operations. There was even talk of converting both barns into hemp-drying facilities — that is, until hemp prices collapsed two years ago.

"There's so much here and so many buildings spread all over the place," Maclure added. "People have an idea [for part of it], but they don't know what they're going to do with the rest of it."

The property does pose some redevelopment challenges. Though it's easily accessible from Interstate 91, and only 22 miles from St. Johnsbury, it's not close to many social services or medical facilities. "It's kind of out in the middle of nowhere," Hudson conceded. 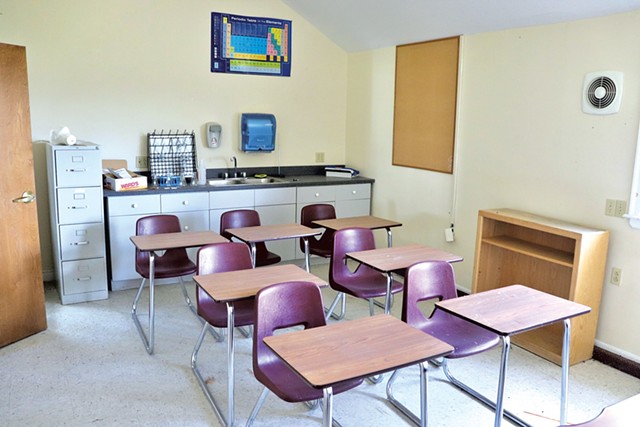 In other respects, its location is an asset. The campus is just 30 minutes from Burke Mountain ski resort, Kingdom Trails mountain biking, the Lamoille Valley Rail Trail and Lake Willoughby. Other outdoor recreational opportunities include hiking on Sutton's Mount Hor, fishing in Sheffield's Holbrook State Park and paddling on the Connecticut River.

The campus' rural character was certainly part of its allure to urban parents, Hudson said — though they might not have imagined how one of the remaining silos would be used. One winter, a KGS staffer hosed down one of them to create an ice-climbing wall for students.

"It was not a bad idea, if it was away from the building," Hudson recalled. However, when the sun heated up the silo's metal exterior, it sent a huge chunk of ice crashing through Eddy's roof.

How King George School got its royal moniker is an unusual story. The same building damaged by the falling ice holds a small performing arts theater named in honor of Elizabeth Shaler Brouha, a Sutton neighbor and patron of the arts.

Her son, Paul Brouha, now 75, still lives on the farm immediately northeast of campus. His parents came to Vermont as Belgian refugees during World War II. Brouha's father was hired as a handyman by Lawrence Henderson, who owned what was then a dairy farm. Henderson later sold it to out-of-staters Grinnell and Myra Martin.

"[Grinnell] Martin was a retired New York banker who didn't get along particularly well with people up here," Brouha recalled. "His answer to everything was to buy it." 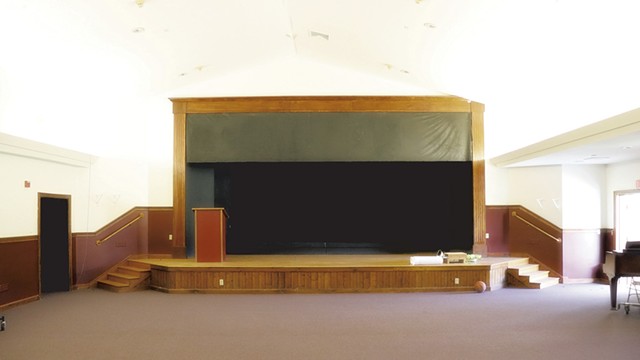 Indeed, the Martins ended up accumulating about 3,300 acres, though they didn't name the land after themselves.

"Around 1952, the mailman showed up and said, 'The Martins have decided that they're going to call their farm the King George Farm,'" Brouha recalled. "Being the kind of guy he was, everyone just assumed he was talking about King George III, the king of England during the Revolutionary War."

He wasn't. Martin was referring to George Chesley, a man who, in the early 20th century, owned a mill along nearby Calendar Brook. As a miller, Brouha explained, Chesley had ready access to cash at a time when much of the area used a barter economy. As a result, he said, Chesley became the "unofficial banker" of Sutton.

"So when Grinnell and Myra Martin decided to call their place the King George Farm," Brouha continued, "my mother decided to have fun and call this place the Queen Elizabeth Farm. She also named our duck house the Queen Mary duck house" after Brouha's grandmother.

Despite KGS' lack of royal lineage, it became an economic engine for Sutton, employing as many as 50 people, with a payroll of more than $1 million, according to a 2005 Associated Press story. Sutton town records indicate that the current owners pay about $85,000 a year in property taxes. 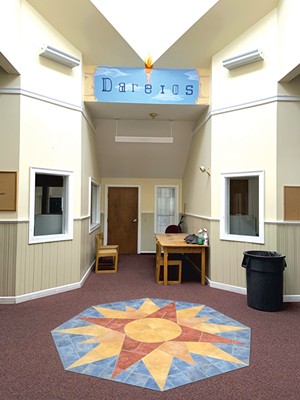 When KGS first opened in September 1998, press accounts often characterized it as serving "troubled youth," which, according to Brouha, initially worried some Sutton residents.

"They turned out to be great neighbors," he said.

"They were great kids," agreed Hudson, who also taught woodworking classes there. "Saying they were 'troubled kids' is just wrong." Most, he said, just came from bad situations at home or school and "needed a change."

They got that at KGS. In its early years, the school focused heavily on wilderness learning. Students went camping in New Hampshire's White Mountains, hiking in Utah's Canyonlands National Park and rafting on the Colorado River in the Grand Canyon. On campus, the KGS curricula emphasized writing, history, literature, and the visual and performing arts.

Unfortunately, like many private schools, KGS ran into financial trouble. In March 2005, owner Brown Schools, which operated seven other therapeutic schools in Texas, Florida, Idaho and Utah, filed for Chapter 7 bankruptcy protection. According to a 2003 investigative series in the Austin American-Statesman, staff at some of those schools were accused of using improper physical restraints and other questionable techniques, resulting in lawsuits and actions by state regulators. No such allegations ever surfaced at KGS, though comedian and author Zoë Klar wrote a March 2015 piece for VICE about the "six bizarre months" she spent there at age 14.

In fact, the Sutton school was the only Brown school that remained open. During the 2005 bankruptcy, Universal Health Services of King of Prussia, Pa., bought KGS and operated it until its closure in June 2011.

Currently, Maclure has an offer on the table from someone interested in purchasing part of the upper campus, which includes the horse barn, girls' dormitories and a large farmhouse. But he'd prefer to sell the entire property as one piece — assuming that someone recognizes it for what it is: a hidden jewel in the Kingdom's crown.