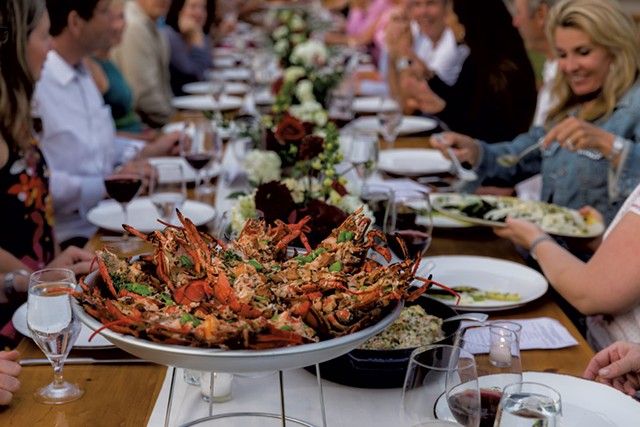 In tiny incandescent lights, the sign above the window at Spruce Peak Village's walk-up bar advertised "VT BEER." But on the service counter, a display of stiff red roses, glittering with crystallized sugar, and neat rows of cut-crystal coupe glasses told a different story. For willing drinkers, the evening would begin with cocktails. And the flowers were meant for eating.

The night was Friday, July 27; the affair, the second of Stowe Mountain Lodge's Farm Table Fridays. The luxe mountainside hotel-resort launched the supper series earlier this summer. Along with Spruce Peak's performing arts center, golf club, shops and private residences, the lodge is independent of the Stowe ski area, which Vail Resorts purchased in summer 2017.

At the bar, a bartender spritzed a glass with juniper-spruce perfume from Burlington's Alice & the Magician. "It's a custom scent," he said, adding bourbon from Smugglers' Notch Distillery and citrus juice sweetened with herbed brown-sugar syrup. He finished the drink with fizzy, mauve-colored wine and placed a flower on top.

"If you'd like to eat the rose," he added, "you might want to start by pulling off a petal or two. The flavor is actually a little bitter."

With drinks in hand, my dinner mate and I wandered onto the village green, a grassy circle surrounded by the soaring timber-frame buildings that define modern resort architecture. Around us were a climbing gym here, a clubhouse there, and shops selling everything from outdoor clothing to high-end home décor.

A modest crowd of resort visitors, golf club members and a few locals mingled near the bar and on Adirondack chairs. Servers circulated with trays of deviled eggs and pillowy cheese puffs made with aged cheddar from Newbury's 4 Corners Farm. 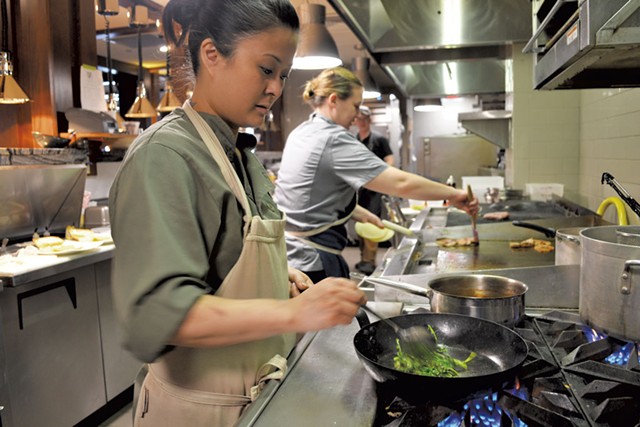 As evening shadows fell over the green, long tables set with linen runners and napkins, white dinner plates and sparkling glasses beckoned all to come and sit for dinner. In the kitchen, Jacqueline Cochran of the Club at Spruce Peak, known locally as "Chef Jackie," put the final touches on an opulent evening picnic.

Vases of peach and yellow dahlias matched the warm colors in a tomato salad course. The heirloom jewels — sourced from nearby Pete's Greens and dressed in mellow red-wine vinaigrette — popped with juicy freshness. Hunks of ripe avocado absorbed the acid, while ribbons of shaved fennel added a sweet crunch.

Up the mountain, the chairlifts were still. The snow guns stood silent as the light faded from dusky blue to flickering candlelight.

In this relative summer quiet lies the genesis of the supper series, said Scott Cochran, who is the operations director at Stowe Mountain Lodge and Chef Jackie's husband. "The goal of every ski resort is to make it four seasons," he said. "This place is an asset to the community in the summer; it's not just for skiing."

Cochran is also the area director of food and beverage for Two Roads Hospitality, which manages guest services at hundreds of hotels and restaurants worldwide, including the Stowe Mountain Lodge. That means the lodge has access to an impressive stable of chefs from Two Roads-managed properties around the country.

On August 31, chef Derek Simcik of Seattle's Scout restaurant at the Thompson Hotel will prepare this summer's final on-the-green dinner. Past meals have come from Patrick Ryan, nominated for a James Beard Award for best chef in 2017 for his Kansas City, Mo., restaurant Port Fonda; and Carlos Benedicto of New York City's Temple Court at the Beekman Hotel, where James Beard Award winner Tom Colicchio is chef-owner.

"I really wanted to showcase the portfolio of talent out there in our system," Cochran said. "These people all have their own individual accolades, and I wanted to see: How can we bring that to Vermont?"

The visiting-chef model takes a cue from Food & Wine magazine's Chefs Club restaurants in Aspen, Colo., and New York City, which invite decorated cooks to take over the kitchen for short-term residencies.

It's no coincidence that Chef Jackie helped launch the Aspen location — or that, on July 27, her dinner had all the glitz and polish one might expect from someone who worked for years under acclaimed chef Jean-Georges Vongerichten.After plates of cider-braised pork belly and Maplebrook Farm ricotta flan, the service switched to family style. 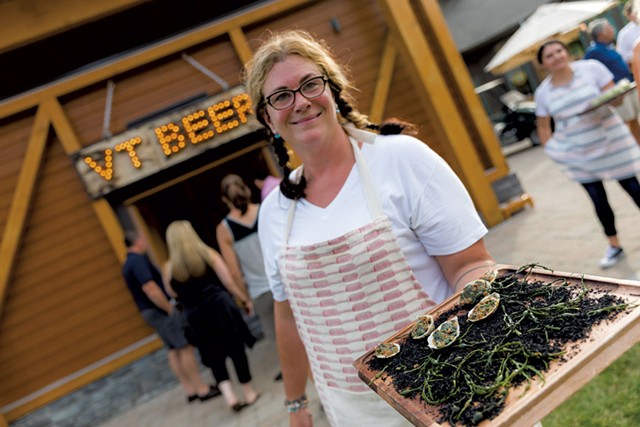 Long fillets of Atlantic halibut came wrapped in banana leaves with fragrant herb chimichurri. The scent of fresh basil lingered as guests passed around bowls of cheese ravioli and cherry tomatoes warmed with sweet-corn purée. While upscale, the meal was also notably family friendly and approachable, even for staunch meat-and-potatoes types.

"What I enjoy about cooking in Vermont is the rustic, homey feel," Jackie said. "It really helps that we are in a resort, so it's people coming up here on vacation with their families — they don't want something hoity-toity or fine dining. They want to enjoy the comfort food."

What's great for locals is that a world-class resort supper, served outside on the lawn, offers vacation-style "getaway" pampering for a few hours — and then you can drive home and sleep in your own bed.

Throughout the evening, sommelier Tim Wallace circled with wine and beer matched to each course: for the tomatoes, a crisp, mineral-y white; for the pork and savory flan, Iapetus Figure 3, an effervescent and enigmatic 2017 Marquette pét-nat grown and fermented by winemaker Ethan Joseph at Shelburne Vineyard.

For dessert came golden beignets served with squirt bottles of caramel, crème anglaise, chocolate frosting and red-berry jam. This elicited squeals of delight from 9-year-old twin girls down the table from us.

The sweet finish was as unexpected as it was fun to assemble. Visitors decorated their plates with pools of jam and squirted squiggles of caramel and chocolate, then dragged their beignets through the goo.

"Doughnuts are not really a dessert," Chef Jackie told Seven Days after the fact. "But then again, they are a dessert — how can you go wrong?"