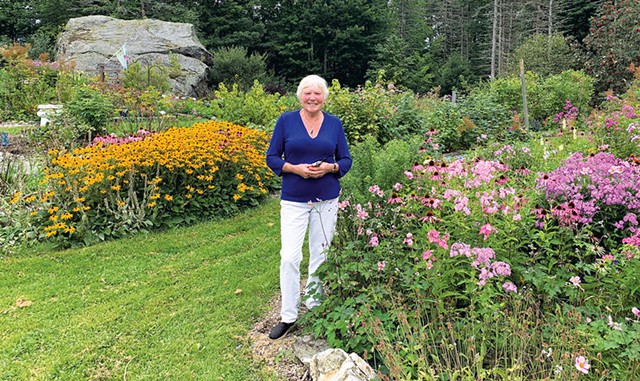 Marijke Niles cried after she moved to Starksboro from South Bend, Ind., in 2001.

While she was happy to relocate to northern Vermont — close to mountains and her daughter, who was then attending college in Montréal — Niles had a problem with the grounds around the home she and her husband had bought.

Everything had been mowed short, she recalled. "It was just kind of dried-up grass. There was not much going on," she said. "I actually was in tears because I didn't see any wildlife."

Back in Indiana, Niles was known for her beautiful gardens and for welcoming all forms of nature into those gardens — even if that involved occasional nibbles of her prized plants. "I've always had plants that attracted everything," she said.

"I couldn't live without my gardens." Marijke Niles tweet this

In Starksboro, Niles immediately set to work planting perennial flowers, shrubs and berry bushes, focusing on native plants. More than two decades later, she cannot stop smiling when she looks over the rambling, colorful, wildlife-rich gardens that have also hosted her nursery business, Marijke's Perennial Gardens Plus, since 2008.

Niles, 76, emigrated from her native Netherlands to the U.S. in the early 1970s. "I come from a country where flowers are honored," she said, noting that fresh flowers are a fixture in most Dutch homes.

"I have always been a gardener," Niles said. "I was the person that would bring a plant to school when I was, like, 6 years old, and I would take care of it." When she came to Vermont, "We moved with three cars full of plants and just a little space for people," she recalled. "I couldn't live without my gardens."

Equally welcome are the many nonhuman visitors who come to her gardens for other reasons. When Nest stopped by in summer 2021, Niles explained how the leaves of sunshine-yellow cup plants cradle water to create tiny drinking bowls for hummingbirds and bees. Monarchs fluttered among the bright orange blooms of the aptly named butterfly weed. "Look at the butterflies," Niles said. "They like it here."

In a few cases, the gardener may gently try to redirect fauna from flora. "I do share," she said. "I love all things alive." For example, she planted several blueberry bushes where bears often emerge from the surrounding woods. The goal? "They'll stop at those blueberries in the hopes that they don't eat mine," she explained with a smile.

Those strategies are not always completely effective, but Niles takes that all in stride. A sign posted last summer by a clump of heavily "pruned" hostas read, "Pardon our appearance. Deer at work." It was one of many whimsical touches around the winding garden paths. Big-eyed stone owls peered out from the "We Rock" rock garden. Sculptural succulents filled ski boots, wooden clogs and even a repurposed toilet bowl topped with another sign: "We know how to pot it up." 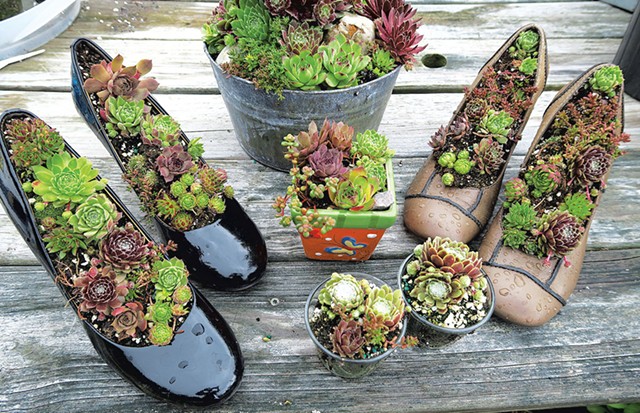 "Imagination and humor run wild at this retail nursery," enthused Yankee magazine in its March/April 2021 issue, which highlighted the best New England nurseries and garden centers. It emphasized Niles' focus on "low-maintenance and 'nature-nourishing' native plants and hardy succulents."

Many repeat customers also sing her praises. Kris Miceli of Starksboro was delighted to discover Marijke's Perennial Gardens Plus a few years ago. "It was so unexpected," Miceli said. "We saw this little sign, and you go down this beautiful little road, and it opens up on all these flowers." Miceli appreciates that Niles grows most of what she sells and can answer almost any question. "You can just pick her brain," she said.

Even those with expertise said Niles teaches and inspires them. Shari Johnson of Cornwall met Niles through the University of Vermont Extension's Master Gardener Program, in which Johnson is also certified. "She's such a positive, can-do person — so fun and so knowledgeable," said Johnson, who especially remembers a garden that Niles created to resemble a patchwork quilt with squares of different sedums.

When designing her gardens, Niles looks to Mother Nature for inspiration. She also counts the ecologist and native plant proponent Doug Tallamy and his 2007 book, Bringing Nature Home: How You Can Sustain Wildlife With Native Plants, among her biggest influences. While she is careful to note that she is not a purist, Niles said, "I definitely call myself a native nursery."

Even if people devote only 10 percent of their gardens to native plants, she said, "that still forms a corridor for insects and butterflies and birds to go from one garden to the other. That already does an enormous amount of good."

In early spring at Marijke's Perennial Gardens Plus, snowdrops and crocuses emerge tentatively from the cool soil, followed by a frothy sea of bluestar and violet catmint. By late summer, pink and purple phlox and coneflowers cluster like a bevy of bridesmaids around a tall birdhouse on a post. Underplantings of low, spreading plants such as red-leafed mukdenia span the seasons, turning from bright green in spring to deep red in fall. Beyond their attractive foliage, they also shade the soil and help reduce the need for weeding and watering.

Niles' gardens are by no means messy, but they are far from manicured and there are zero straight lines. "I like it to flow," Niles said. "Nature doesn't plant in a row."

Set dramatically against the backdrop of surrounding woods, a massive 15-foot-high boulder draws attention, and the mass of tall Joe-Pye weed and the creamy bottlebrush blooms of American burnet planted at its base draws plenty of insects.

The arresting natural feature is known as an "erratic" rock, deposited on this Starksboro hill during the Ice Age, Niles explained. "I try to plant around it such that it really can be seen," she said.

In 2008, a big storm helped clear space for her nursery business by bringing down about 120 trees. "They all tipped over like dominoes," Niles said. The stumps of several still lay, roots exposed, anchoring beds of ferns and mosses as they decay naturally in place. A number fell around the huge rock, making it more visible. "I was very grateful for that," Niles said.

Edging toward 80, Niles shows no signs of slowing down. She has some part-time help during the gardening season, but "I'm always weeding," she said. "It keeps me in the very best of shape."

In the winter, Niles keeps in shape on the slopes at Sugarbush Resort, where for the last 21 years she has taught skiing to preschoolers through octogenarians. She first fell in love with the sport many years ago in Austria for the same reason that she is such a devoted gardener. "There was this connection to nature that still catches me every day on the slopes," she said. Her teaching gig was born out of winter boredom, she said: "I need to be busy."

From late spring through fall, Niles stays busy giving talks, workshops and tours in her gardens. She has volunteered with the Vermont Flower Show for more than 16 years and especially gets a kick out of hosting groups of youngsters from local summer programs. They explore all the nooks and crannies of the gardens, make succulent containers to take home, collect Japanese beetles in jars, and help layer newspaper and cardboard to suppress weeds and grass for new garden beds.

"I like to make memories for my guests from the impression of my gardens, but also because I share knowledge," she said. "We celebrate nature."

The original print version of this article was headlined "Perennial Passion"