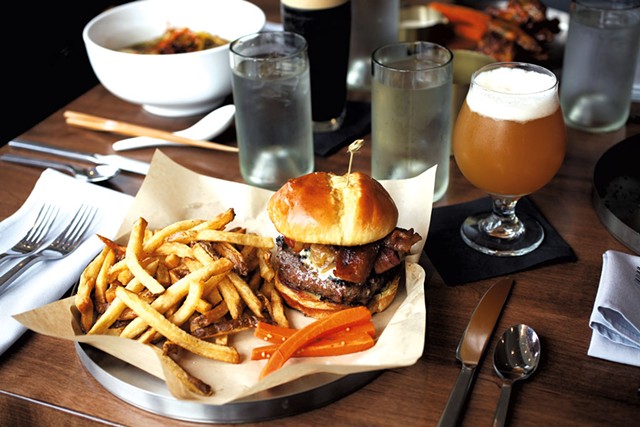 Remember those Choose Your Own Adventure books, best sellers in the 1980s and '90s and still published by Vermont's own Chooseco? You're the protagonist, making important choices every few pages to reach one of a multitude of potential endings. That was all I could think about as I made my way through the menu at Kingdom Table in St. Johnsbury.

Would I have the poutine and a burger, or the bao buns and ramen bowl? Each section of the menu had me seriously considering which kind of dining adventure I was about to take. In this case, though, there would be only one ending: stuffed and satisfied.

Kingdom Table is the new restaurant from the 16 owner-partners behind Kingdom Taproom — a subterranean, speakeasy-style beer destination on Railroad Street in downtown St. Johnsbury. The Taproom has been quietly drawing in beer nerds since it opened in April 2014, and when the bright, street-facing space upstairs became available last year, the eight couples didn't want to see it sitting vacant.

"We've been very successful with Kingdom Taproom, but the one thing it missed was visibility," managing owner Jamie Murphy said. "We thought, Let's put a big, shiny new restaurant upstairs, and it'll further accomplish what we're setting out to do, which is: bring people downtown."

The space had been carpeted and dry-walled in its previous life as Allen's Kitchen & Bath, but the owners, including Murphy and a few other Kingdom Taproom partners, knew it had hidden potential. "It had exposed brick and old original flooring, great light from Railroad Street and a view, which is something we didn't have down in the basement," Murphy said.

After a reno, Kingdom Table opened in the upstairs space in April 2019. Offering a varied menu of gastropub-style food, the restaurant follows the locavore ethos established at the Taproom, sourcing from area farmers whenever possible. And, just like downstairs, it's no slouch in the beer department; six rotating taps often feature Vermont's Hill Farmstead Brewery, Upper Pass Beer and Red Barn Brewing, as well as New Hampshire's Schilling Beer and Resilience Brewing.

"Typically we have [Hill Farmstead's] Edward both upstairs and down, but I try to keep everything else different, and I try to keep it very local [at Table]," said Murphy, who curates the draft list. The Taproom's list is larger, at 15 rotating drafts, and goes farther afield; it recently featured California's cult classic Pliny the Elder. Both the Taproom and the Table offer an extensive international bottle list, which sports a shocking number of reasonably priced lambics from Belgium's Brasserie Cantillon.

"We opened the Taproom for the beer, and we weren't even considering making a restaurant," Murphy said. "We were mostly just desperate to get some Hill Farmstead in our town."

The original plan was for the Taproom to stick to bar snacks. But the community's clear need for dining spots made the owners relent and offer food, Murphy said, even though they had little restaurant experience, and the basement lacked an exhaust system. "We kind of muddled through it the first year, and then we brought on some more professional people to help run it," Murphy recalled.

One of those professionals is Annie LaChance, who is now the general manager upstairs at Kingdom Table, where she makes salad dressings, soups and desserts from scratch. Thanks to the bigger kitchen upstairs, executive chef Lisa Foster, a New England Culinary Institute grad who used to run Tilley's Café in Burlington, can offer more variety than the sandwiches and flatbreads that anchor the downstairs menu.

On the night of my dining adventure, I made an unexpected choice right from the start: I skipped the beer and ordered a small bottle of Eden Specialty Ciders' Brut Nature. My first glimpse of the menu hadn't yielded a clear plan, and I knew this cider from the Northeast Kingdom would complement whichever culinary path I chose. My husband, who was my dining sidekick, went with an IPA from Hill Farmstead.

These two ordering philosophies would stay consistent throughout our meal: In the Choose Your Own Adventure book of our evening, I was the risk taker, while he tested the more common choices for a beer-focused meal in Vermont.

For appetizers, we ordered the maple-habañero chicken wings and the steamed bao buns. The wings had the right balance of spicy and sweet, and the generous portion ($12) came with housemade blue cheese dressing and delightful pickled carrots. An aside to all restaurants serving chicken wings: Pickled carrots are way more fun than unpickled carrots.

When our attentive, friendly server brought the bao buns to the table, I had an inkling that my risk taking wouldn't end with me stranded in a ditch. The buns ($12 for three) were light as air and stuffed with a flavorful mixture of baby bok choy, shiitake mushrooms, carrots, ginger and a spicy Thai chile jam. The ponzu dipping sauce was salty and sweet.

For our mains, my husband ordered the Downstreet Burger ($16): local grass-fed black Angus topped with caramelized Vidalia onions, Jasper Hill Farm Bayley Hazen Blue and maple-habañero NEK bacon. St. Johnsbury may be nearly a two-hour drive from our house, but I have a feeling we'll return to Kingdom Table for that burger.

I considered the IPA-roasted chicken (because beer), the steak frites with chimichurri sauce and the crispy chicken sandwich. Ultimately, though, I ordered the ramen noodle bowl ($17). The bao had been such a pleasant surprise that I wanted to try chef Foster's other Asian-inspired offering.

The ramen is vegetarian, with a veggie broth, a big heap of noodles, spicy kimchi, a medley of veggies (similar to the bao filling), a shoyu-marinated soft-boiled egg, a perfectly fried vegetable dumpling and more of the Thai chile jam that spiced up the bao. The flavors were well balanced, and the portion was so plentiful that I ended up taking half of it home.

The menu at Kingdom Table offers tons of variety for its size, and that's a purposeful choice. "I think our menu finds a way to make everyone happy," Murphy said. "We want to make it affordable for people that live in the community but also appeal to people who are on their way up to the mountain to go skiing. You can have a burger and fries very cheaply, or you can get a nice bottle of wine and a really good steak."

The owners of Kingdom Taproom and Table aim to provide diverse yet complementary dining options in the heart of a downtown that's rapidly revitalizing. Murphy mentioned that the Depot Square apartments are being renovated, the St. Johnsbury Distillery (maker of products such as Dunc's Maple Rum) will soon open, and a brewery is moving in next door to the Table. All are signs that people are getting off the highway and spending time downtown.

"Nothing happens as quickly as you want it to happen, but we're seeing the changes, and we feel like we are on the cusp of something really big," Murphy said.

The original print version of this article was headlined "King(dom)'s Feast | The Taproom adds a Table in St. Johnsbury"