In Springfield, a Mom Fights to Send Her Son With Disabilities Back to School | Education | Seven Days | Vermont's Independent Voice

In Springfield, a Mom Fights to Send Her Son With Disabilities Back to School 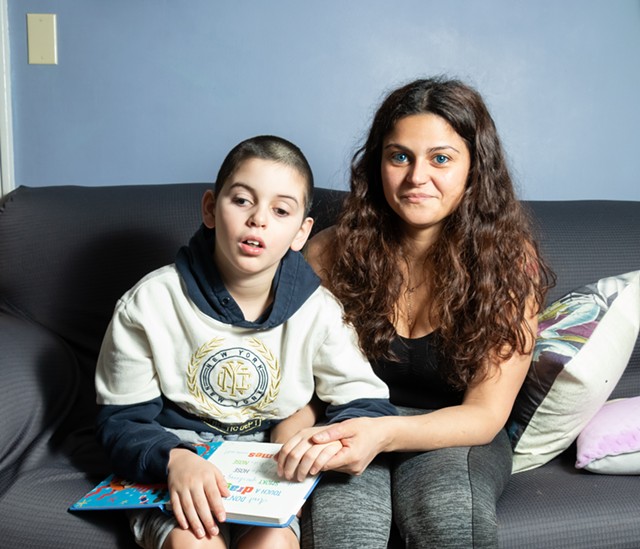 Every day, when 10-year-old Maurice wakes up, his mother, Lauren, sings him the 1960s pop song “Good Morning Starshine.” She asks him if he slept well, hugs and kisses him, and gives him his morning medicine.

Every night, before Maurice goes to bed, Lauren tells him how strong, resilient, funny and sweet he is. She reads him a story, then lies next to him as he drifts off to sleep, massaging his hands and assuring him that tomorrow will be here soon.

During the day, Maurice — who has multiple disabilities, including cerebral palsy, epilepsy and visual impairment — should be in school. Like all children with disabilities, he’s entitled to a free and appropriate public education, often referred to as FAPE, under the federal Individuals With Disabilities Education Act.

For most of his life, Maurice was getting one. Before the pandemic, he attended elementary school five days a week in Burlington, where he had a one-on-one paraeducator and worked with a team of providers — including a special educator, occupational therapist and speech-language pathologist.

But in the spring of 2021, Lauren — a single mom who asked that her last name not be used due to safety concerns — moved with Maurice to Springfield to be closer to his team of doctors at Dartmouth-Hitchcock Medical Center.

Maurice started summer school at Union Street Elementary School in July 2021 but was kicked out a few weeks into the program, after he yanked on a paraeducator’s hair.

Almost a year and a half later, Lauren is still waiting for the Springfield School District to allow Maurice to return to class.

She believes the district is violating federal law, and the Vermont Agency of Education has sided with her — twice. In response to Lauren’s two separate complaints that the district denied her son a free and appropriate public education, the agency substantiated her claims.

While it is not unusual for families and school districts to disagree about how special education is carried out, Lauren’s dispute is a particularly extreme example of a district’s failure to comply with federal law.

Typically, special-education conflicts are resolved through meetings between caregivers and the school or, sometimes, using a more formal mediation process. Less commonly, parents can file an administrative complaint — which Lauren did twice — or request a due process hearing with the Agency of Education. The latter option requires a lawyer and is cost-prohibitive for many parents, including Lauren.

Related With Schools in Crisis Mode, Kids With Disabilities Are Being Left Behind

With Schools in Crisis Mode, Kids With Disabilities Are Being Left Behind
By Alison Novak
Education
The majority of those complaints and hearing requests do not lead the Agency of Education to demand corrective action, as it did twice in Maurice’s case. During the 2020-21 school year, for example, 15 complaints were filed with the Vermont Agency of Education. Six were dismissed, and the agency substantiated only three, according to data from a federally funded group.

Fran De Gasta, a volunteer special-education advocate who works with Lauren, characterized Maurice’s case as “one of the more egregious” ones she’s seen in her three decades working with families.

In February, Seven Days detailed Lauren and Maurice’s plight in a story about students with disabilities who were being left behind due to COVID-19-related disruptions and workforce shortages in schools. 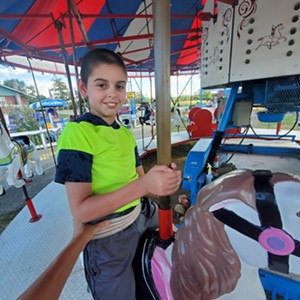 After staying home for the first three months of last school year, the school district began providing Maurice with just one hour per week of in-person instruction — in the form of occupational, physical and speech therapy — with the caveat that Lauren stay with Maurice to act as a de facto paraeducator.

In the nine months since, little has changed. Lauren filed two administrative complaints with the state — one in February, the other in August — alleging that the Springfield School District violated Maurice’s right to a free and appropriate education. Both complaints were investigated and fully substantiated by the Vermont Agency of Education, which has ordered the school district to figure out how to provide an education to Maurice. But the district maintains that it still doesn’t have the qualified staff to meet Maurice’s needs.

Lauren said her son has become clinically depressed. While leaving physical therapy one day, she recalled, Maurice heard a group of kids playing basketball. He ran toward them but hit a fence, then tried to climb over it.

Maurice “wants to play with kids,” said child-life specialist Andrea Herrington, who provides twice weekly home visits to Maurice to help him with language, emotional expression and pain management. “Mom and I are fun, but we’re not other 10-year-olds.”
Herrington, who works for Dartmouth Health’s Visiting Nurse and Hospice for Vermont and New Hampshire program, said that while Maurice is making some gains from the limited instruction he’s receiving, it’s “a Band-Aid” compared to “what progress he would be making if he was [spending] six hours a day at school.”

While the pandemic created barriers for students with special needs, Herrington added, “most of the kids I work with are back in school if their family wants them back in school — and schools have figured it out.”

The situation has also taken a toll on Lauren.

“When I lived in Burlington," she said, "you didn’t really need to know that many [special-education] laws because it just kind of worked relatively seamlessly.

Since moving to Springfield, “I had to become a special-education attorney overnight," she said.

Lauren doesn’t think Springfield administrators have tried hard enough to hire someone to work with Maurice and doesn’t understand why the district isn’t facing consequences for its failure to educate him.

Springfield School District superintendent Sherri Nichols said she was not legally allowed to comment on Maurice’s case. But in an email to Seven Days, she noted that the district has 21 positions currently unfilled.

“The Springfield School District, like many districts in Vermont, have students not receiving essential care due to inadequate staffing and a shortage of applicants,” Nichols wrote. 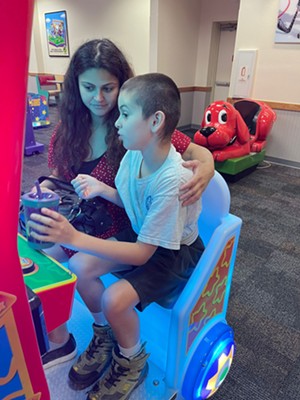 In the eyes of the law, however, a staffing shortage isn’t an adequate excuse for failing to provide students with a free and appropriate education. That’s one of the conclusions the Agency of Education came to in both of its findings about Maurice’s case.

In the April report, an investigator found that the district “failed to provide Student’s special education services in accordance with his IEP” — a legally binding document that details what services and support a school must provide for a child with special needs and in the “least restrictive environment.” Least restrictive environment, or LRE, is one of the core principals of the Individuals with Disabilities Act and is meant to ensure that students with disabilities receive their education alongside their peers whenever appropriate. Educating them apart from their peers should happen only as a last resort.

The first report listed corrective actions the school district needed to take, including providing compensatory services — which often take the form of extra instruction to make up for services denied. It also said that the district would have to create a plan for providing a free and appropriate public education to Maurice and, within 90 days, provide documentation of the plan.

But the directives did not spur any change in Springfield, which is one of four districts in the state that the Agency of Education classifies as “needs intervention” in special education.

For the remainder of last school year, Maurice continued to receive occupational, physical and speech therapy for just one hour per week. He also attended a short read-aloud session in the school library each week, which the district offered as a compensatory service. District officials initially told Lauren that Maurice could go to summer school, but they rescinded the offer when they were unable to hire staff to provide services to him.

Frustrated by the lack of progress, Lauren filed a second administrative complaint on August 14, stating “Maurice has still not attended a single day of school” and had not received most of the services in his IEP.
The agency’s October report once again substantiated Lauren’s allegations.

“It is clear that the District has continued to fail to provide many of the services on Student’s IEP since at least April 2022, when the [original AOE decision] was issued,” assistant attorney general Jaime Kraybill, the investigator, wrote.

The Agency of Education gave the school district 30 days to schedule an IEP meeting for Maurice and 60 days to submit a plan to the agency for offering compensatory services. 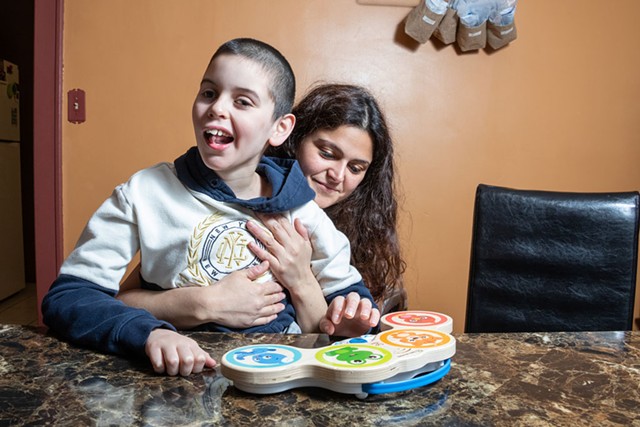 Springfield superintendent Nichols said in an email that the district sometimes looks to service providers outside of the district, or other programs in the region, to provide special education services. But, Nichols said, the pandemic has limited those placements.

The district has also proposed paying for Maurice to attend a residential school in New Hampshire or Massachusetts. The option has been brought up multiple times, despite objections from Lauren, Maurice’s father and his health care providers.

A residential placement “tears [Maurice] away from his family, from his community, from his home, from his providers he's developed rapports with,” Lauren wrote in an email to the district. “Given that absolutely no one who knows him believes residential to be appropriate, what gives you the impression a residential facility would even accept the referral?”

The Agency of Education “is still reviewing the facts and determining the best approach” to ensure the district complies with the findings, agency spokesperson Ted Fisher said in an email.

The Springfield School District has “a recent history of challenges in administering special education,” Fisher wrote. He characterized the district’s shortcomings as “serious” and said Springfield needs “the right interventions and supports to ensure [it] can fulfill its obligations to its students under the law.” Fisher did not say what those interventions and supports might look like.

Meanwhile, Springfield administrators and Lauren met on Friday to discuss the situation. The district proposed contracting with a behavioral services provider in New Hampshire to provide staffing for Maurice but, according to Lauren, has yet to figure out the specifics or sign a contract with the company.

Lauren said her faith in the educational system, and those that oversee it, has been shaken from this experience. After fighting for her son’s right to attend school for a year and a half, she said she’s left with little hope that anything will change.