In South Pomfret, an Old Grange Becomes a New Theater 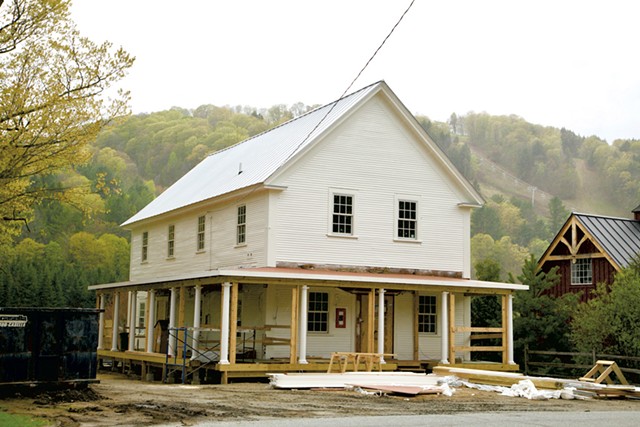 To paraphrase Shakespeare, all the state's a stage. Or so it seems during summer in Vermont. And some brand-new venues are helping to push an already-busy theater season into high gear.

On the heels of the recently built Highland Center for the Arts in Greensboro comes another still-under-construction facility, the Grange Theatre in South Pomfret, which will mount its first production late this summer. As its name suggests, it will be housed in the community's old grange hall, a space formerly known as Teago Grange Hall. The theater represents an expansion of local nonprofit ArtisTree Community Arts Center and Gallery.

ArtisTree was founded more than a decade ago in Woodstock. In 2014, the organization moved down the road to new quarters in a former barn in South Pomfret, where it offers art classes, art therapy programs and gallery and performance spaces.

The high-ceilinged grange hall, which is being transformed into a 90-seat theater, was originally a basket factory that stood on the Pomfret-Barnard town line, according to local historian Elaine Chase. The structure was moved to its current location near the Suicide Six ski area in 1908; it served as the grange for most of the 20th century, said ArtisTree marketing and communications director Tayo Skarrow.

"We want to be a really intimate space where people can have a wonderful theater experience," Skarrow said.

She explained that the theater project emerged after community members approached ArtisTree's executive director, Kathleen Dolan, about finding a possible use for the old grange. After all, the organization had previous experience with renovating two 19th-century structures — a farmhouse and a barn — into art and education spaces.

The Grange Theatre's director is Chris Flockton, a Scottish-born, Liverpool-raised actor and voice-over artist. He moved to the Upper Valley in 2011 after 17 years working in theater in New York City.

"I was toying with what would be the most effective way to commit career suicide, and I decided that moving to Vermont would probably get that done in short order," Flockton joked with deadpan British humor.

He added in all seriousness, "I adore Vermont, and if I have my way I will live the rest of my life here."

His career took this pleasing direction last winter, when his wife returned home after taking their son to a clay class at ArtisTree.

"It was a good clay class," Flockton recalled her reporting to him. "And I might've found you a job."

And so she had. "Director of theater arts is the fully pretentious title," Flockton joked, noting that this is his first full-time job in 26 years.

"The opportunity to build something from the ground up was too good to pass up," he said. "I had been looking for a way to get more engaged with the artistic community in the Upper Valley. The opportunity felt like it was tailor-made for me."

Flockton's vision is that Grange Theatre will be a "hybrid organization" — a creative and collaborative blending of professional theater and community engagement. Grange productions will feature professional actors, directors and designers as artists-in-residence, working to "facilitate a collaboration with the community," he explained.

"I'd like to filter everything through the prism of:How does it serve the community?" Flockton said. "That's the question I'm constantly asking myself when we think about what we want to do in this theater."

He imagines four or five productions a year, including a summer theater season. In addition, the Grange will be used for classes and perhaps musical performances.

"It's a very versatile space," Flockton said. "The floor can be cleared, and it can be restored to a grange hall if we want to make it available for a community meeting or a prom."

Grange Theatre will create an opportunity to expand engagement with local schools; Flockton recently worked with Pomfret elementary school students on writing personal essays and recording them as podcasts. He's also involved with Shakespeare in the Schools, a Northern Stage program through which he is teaching A Midsummer Night's Dream to middle schoolers in Hartland.

Flockton will perform next winter in Northern Stage's world premiere of Yesterday. Written by Hollywood veteran Bob Stevens, the play is about a couple of performers who also grew up in Liverpool: John Lennon and Paul McCartney. Flockton will play their road manager, Mal Evans.

"Like everybody here at ArtisTree, we are working artists," he said. "We have our jobs here, and we make time outside to continue our art."

Grange Theatre joins several performing arts organizations in the Upper Valley, including Northern Stage in White River Junction, Pentangle Arts in Woodstock and BarnArts Center for the Arts in Barnard.

Flockton considers this a blessing. The key to running a successful theater within the regional performing arts community is to create compelling work and forge a distinct identity, he said. "I want to do interesting and challenging pieces of theater that will allow members of the community to find a home in the theater."

Collaboration with other theater companies is also vital, he believes.

Grange Theatre will host a community open house on July 22, in advance of its summer season. The company's inaugural performances will be four musical theater productions, starting in mid-August with Disney's The Little Mermaid JR.