In Shelburne, a Classic Craft School Is Reborn 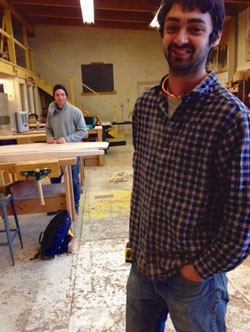 The Shelburne Art Center is rocking its roots. In a few weeks, says director Sage Tucker-Ketcham, the Shelburne village complex on Harbor Road will resume its original name, the Shelburne Craft School, and reinvigorate its craft-education mission. “It’s a pseudo-version of the old model, but works better with today’s world,” she notes, explaining that the instructors will not be required to teach full time but can pursue their own craft careers while passing their skills along to others. The school will continue to offer classes for all ages — from dabblers to preprofessionals.

An essential component of the center’s education is woodworking, just as it was when the school began, in 1938, after one Rev. J. Lynwood Smith invited local boys to learn the fundamentals of the craft in the basement of nearby Trinity Episcopal Church. Seven years later, the Shelburne Craft School was incorporated as a nonprofit, a facility where professional craftspeople could both create their own work and teach students. Besides woodworking, classes in pottery, jewelry making and other visual arts were added.

More than six decades later, the woodshop is humming with activity, under the direction of manager Zach Ogden, and has a brand-new Woodworker-in-Residence Program. Three emerging woodworking professionals — Matt Hastings, Chris Ramos and Rachel Brydolf-Horwitz — are expanding their own businesses in the facility while also offering classes and twice-monthly weekend specialty workshops. The four make up a sort of pilot program, Tucker-Ketcham says, in which there is an “open dialogue” while “we work out the kinks.”

The residence progam hones not only woodworking skills but the business and marketing savvy necessary for individuals to launch their own enterprises. Previous experience at a certified institution, such as Warren’s Yestermorrow Design/Build School, or in a formal apprenticeship is helpful for scoring a residency, though not required. The $300 monthly fee for the residency can be offset through teaching opportunities. Woodworkers-in-residence are expected to stay for a minimum of nine months and a maximum of 18 months.

Tucker-Ketcham and the board of the soon-to-be Shelburne Craft School have been doing more than planning a comeback; they’ve also been developing strategic partnerships to further the mission. One is with the Vermont Woodworking School in Fairfax, which is in turn affiliated with Burlington College. VWS hosts the college’s craftsmanship and design degree programs, and recently received an official designation as a Vermont state craft center. While BC’s craftsmanship majors take their woodworking classes at VWS, they can get college credit for classes in stained glass and metalsmithing at the Shelburne facility.

Woodworking graduates of BC, or any other school, Tucker-Ketcham notes, may not be quite ready to launch their own businesses; any who choose to extend their training with the Shelburne residency program will find it an “incubator” and “interim step toward their professional life,” she says.

In addition, Tucker-Ketcham reports being in talks with Shelburne Museum and Shelburne Farms about ways to promote each other’s events and jointly market the three institutions. “We’re the triangle of historic Shelburne,” she suggests. One collaboration is already under way: The craft school is procuring its wood from the grounds of Shelburne Farms.

Tucker-Ketcham, who has been at the helm of the center since November 2010, is clearly excited about her facility’s return to a classic mission — one that particularly resonates locally. “Hands-on education has a place in our society again,” she says. “In Vermont, it’s parallel with the [locavore] food movement.” Just as Vermonters want to grow their own food or know where it was grown, Tucker-Ketcham explains, “I’d rather support a local jeweler than buy something mass produced. Handmade is so big right now,” she adds. “It’s good timing for us.”

The Shelburne Craft School will soon be announcing details of a returning-to-roots party on May 12, noon to 4 p.m. It has also launched a new website theshelburnecraftschool.org. More info, at 985-3648 or shelburneartcenter.org.