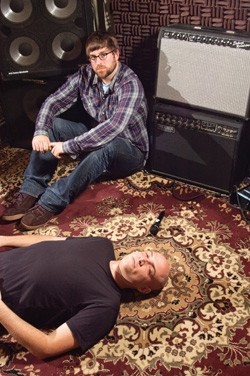 Rob O’Dea is on a roll. He’s sitting on a couch at the Tank Studio, the Burlington recording studio he co-owns with Ben Collette, ranting about the harebrained shit musicians do throughout the process of making records. He’s practically yelling — his face bright pink, his hands waving in the air — but he’s not pissed off. He’s more, well, building to the punch line.

Here’s the setup: A bunch of guys he worked with didn’t have the balls to tell their bandmate that his vocals sucked. Four of them listened in the control room with O’Dea, while the other guy, in the vocal booth, tried for the umpteenth time to nail some backup vocals. They all knew he sounded terrible, but they didn’t want to break it to their bro. They turned to O’Dea for advice.

“So the guys ask me, ‘Please, we want your opinion. What do you think?’” says O’Dea, an incredulous expression on his face. “And what I think is, we should stop wasting an hour-and-a-half having the dude who can’t sing sing backups!” O’Dea, 36, erupts into a short, loud burst of laughter.

“Someone has to speak up when the drummer’s speeding up,” he says. “You can’t just all sit there, tight-lipped, pissed about the fact that you dumped seven takes and it’s not happening.” He sighs. “Really, it’s about dealing with clients, just like any business,” he says.

That’s how it is with these two. They have a million funny stories about working with musicians, but they don’t name names. For O’Dea and Collette, each story seems to be about the same thing: figuring out the best way to get the job done.

Neither is new to the music business. Collette manages Phish’s studio, the Barn, and oversees all the band’s gear. O’Dea works full time at Egan Media Productions, a video production, sound design and post-production studio in Colchester. He’s also played bass with everyone from Page McConnell to Deep Soda to Heloise & the Savoir Faire.

Their goal with the Tank, which they opened in 2007, is to make recording accessible to the Burlington scene. They’re not a nonprofit, but intentionally run their business on a pretty slim margin.

In the past few years, they’ve worked with anybody who’s anybody in the Burlington music scene, including Rough Francis, Lowell Thompson, Waylon Speed, Parmaga, Blues and Lasers, Lendway, the Smittens and the Pulse Prophets.

“Not to toot our own horn or anything, but we make a lot of records,” says Collette. “Every process is different, and it’s whatever works for the artist we’re working with.”

The recording process can be a reality check for musicians who haven’t spent a lot of time in the studio, they note. A successful project usually starts with a thorough discussion with each band about the role of the producer: How much do you want me involved? Do you want me to be the guy who tells your buddy that his singing/guitar playing/drumming isn’t working? Are you really going to listen to my feedback? OK, good. Now let’s discuss who’s going to manage the budget. Without that direction and planning upfront, a two-month project could turn into an eight-month project, warns O’Dea.

Some bands prefer to record at the Tank but have someone else mix the album. Other bands want the opposite. It’s all fine with Collette and O’Dea; they offer recording, mixing, mastering and just about everything in between.

Collette recently mixed local indie-pop band Lendway’s new album, Giant Places, and passed it on for mastering to Fred Kevorkian, a nationally known mastering guru who’s worked with Willie Nelson, the White Stripes and Dave Matthews, among others. It’s not the only valuable connection Collette and O’Dea can offer their clients. Sometimes they bring bands to record at Egan, or even to the Barn, where Waylon Speed is heading to record their new album.

“They want to record live to tape in one big room,” Collette explains. “And that space is perfect for them.”

In addition to producing albums for local bands, Collette and O’Dea contribute to the long-running WRUV 90.1 radio show “Exposure,” which airs on Wednesday nights at 8 p.m. The show promotes local music through live performances and interviews in the station’s University of Vermont campus.

But for the past two years, Collette and O’Dea have prerecorded about half of the show’s performances at the Tank. It gives them a chance to create a higher quality recording. They also stream the performances live on their website on Monday nights, along with video shot and edited by their buddy Justin Gural of the local production company Cortex.

“Exposure” helps achieve the Tank’s goal of accessibility: They do the show pro bono.

“It does translate to work for us,” says Collette, though he says that’s not the main motivation. “It’s a nice way to give back to the local community and promote local music,” he says, “and purely just to make shit sound good, you know?”