In Sarah Trad’s 'What Still Remains,' the Foreign Becomes Familiar 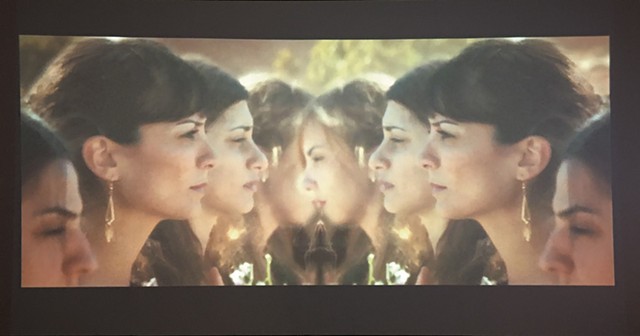 Every culture is a tribe, a pack, and within it are repressive factions that discourage, legislate against and punish individuals who stray in behavior or belief. Visitors to the BCA Center in Burlington might keep this in mind when viewing Sarah Trad's exhibition, "What Still Remains." Images that may seem foreign — Arabic language, Middle Eastern music and film — nonetheless convey relatable themes: self-discovery, acceptance or rejection, generational divides, objectification, grief.

Trad pursues her inquiries through video and felted textiles — a fusion that BCA curator and director of exhibitions Heather Ferrell said in a phone call is "unique to my 30 years of experience." The mediums offer stunning visuals to the viewer, and the contrast in materiality is unexpectedly pleasing.

Born in 1989 and now based in Philadelphia, Trad describes herself as a queer, femme Lebanese American and Arab American; "What Still Remains" is largely an examination of this prismatic identity. But she also investigates the representation of identities in media. For her, in this country, that's almost nonexistent — even as her own video work has been screened widely and garnered awards.

"It can feel isolating trying to find media that reflects one's own personal experience," Trad writes in an artist statement. "I created a body of work around what I thought new narratives might look like, creating various moving-image self-portraits that better reflect myself."

Trad appropriates and manipulates scenes from movies, music videos and television shows that are popular in Arab culture, creating those new narratives as single- and multiple-channel videos. With the found footage as a base, she uses glitch and other eye-boggling digital effects to create hypnotic and sometimes explosive visual content.

Viewers might pick up on thematic threads such as depression, inherited trauma and loss, or Trad's personal confrontation with a complicated racial lineage. Or they can just take a bench in the gallery and let her optical wizardry wash over them.

Opposite the second-floor gallery's entrance, a screen filling most of the wall shows "How I Met My Grandfather" on a loop five minutes and 32 seconds long. It's a scene from "Where Do We Go Now?" a 2011 Lebanese film directed by Nadine Labaki, in which a crowd of female mourners — Christian and Muslim — walks in choreographed unison toward a cemetery. Trad's manipulation shows us the crowd from behind and then the front, makes the women larger and smaller, eclipses them into kaleidoscopic polygons, and disappears them altogether. Over and over again. This work is painstaking, Ferrell explains in a gallery label:

"Using post-production processes such as rotoscoping, Trad cuts and collages each frame from the film's introductory scene to visually express the sense of loss she felt following the death of her paternal grandfather — who had served as the artist's connection with Arabic language and culture."

Mournful singing and, at one point, a man's voice provide a muffled soundtrack — it seems to come from underwater or behind a closed door, or from a dream.

On an adjacent and much smaller monitor, a 16-minute single-channel video titled "Abir, Forever" features a woman dancing, clad in a diaphanous white sheath, a beaded face covering and dark hair that falls to her knees. While she moves sinuously, occasionally staring assertively at the viewer, several individuals sit motionless in a parked car next to her. The desert lies beyond. 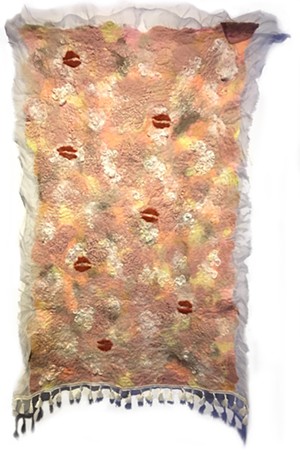 This footage is appropriated from a music video by Moroccan American vocalist Abir. Trad uses it to challenge the West's sexualized and objectified views of "exotic" Middle Eastern women. By turns, the image pixelates, freezes and then bursts into an abstraction of fiery colors. The piece is utterly transfixing. Trad calls it a "dreamy hellscape" in which the dancer is both alluring and demonic.

Two felted rectangles accompany a vertically oriented monitor showing a manipulated clip from Circumstance, a 2011 Iranian American film directed by Maryam Keshavarz. In the full-length film, Iranian teens party and experiment with sex, booze and drugs. Zeroing in on a taboo lesbian relationship, Trad's "Spiral" shows two clearly upset young women lying side by side, shot from overhead. One gets up and leaves, perhaps signaling the impossibility of their relationship. Trad again uses mesmerizing repetition and glitch, underscoring this wrenching breakup.

Next to this assemblage, director Maysaloun Hamoud's 2016 film In Between appears, manipulated, in a tiny monitor just a few inches wide. This film, too, explores youth culture, this time in Tel Aviv, as well as the defiance of traditional expectations for women.

If Trad's videos address "hard" realities, her textile pieces are literally soft and pretty, their presence an inherent homage to a feminine craft. Nuno felting does not belong to her ethnic lineage; it's credited to an Australian woman. But, as with the appropriated and manipulated films, Trad makes these felts her own, sometimes incorporating Middle Eastern motifs.

"The fiber installations in this body of work are intended to immerse the gallery space further into a playful and colorful feeling of adolescent girl fandom," she writes in her artist statement. "I felted designs from Turkish ceramics and Moroccan rugs that mirrored doodles I might have found in my pre-teen diaries."

Ferrell, who met Trad during her 2019 residency at 77Art in Rutland, noted that she got involved with Nuno felting during the pandemic. Trad only recently decided to include some of these pieces with her video installation at BCA, Ferrell said. As it turned out, the unconventional pairing of mediums works.

The textiles add warm blocks of color, organic textures and a respite from the videos' drama. Trad seems to have created, even if inadvertently, a sort of visual security blanket, a refuge from her stated struggles with anxiety, depression and residual trauma. She has disrupted her own original narrative, and it feels a lot like comfort.

The original print version of this article was headlined "Woman, Interrupted"