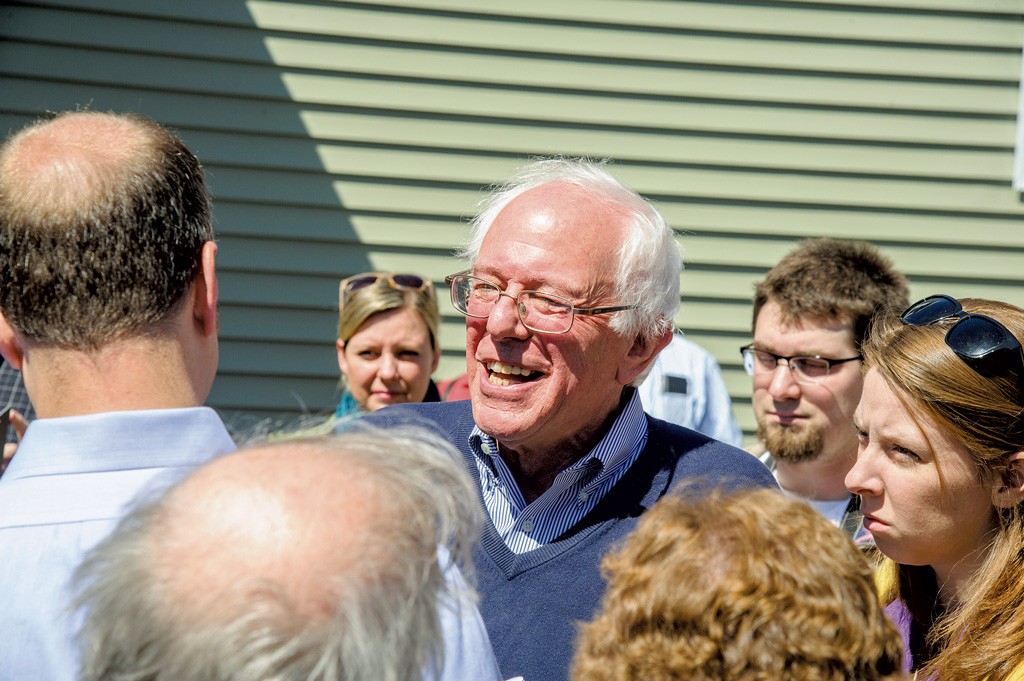 In his first public appearance as a presidential candidate, Sen. Bernie Sanders (I-Vt.) looked liked a man who had something better to do. Standing at a podium in the shadow of the U.S. Capitol last Thursday, he informed the reporters gathered before him that he'd entertain only a few questions.

"We don't have an endless amount of time," Sanders said with an air of impatience, gesturing at the domed building behind him. "I've got to get back."

It was an unusual rollout for an unusual candidate: no iconic, home-state imagery in the background, no crowds of screaming supporters, no soaring campaign rhetoric, not even a polished announcement video. Just a busy guy taking time out of his lunch break to announce a run for president.

"This is not going to be a campaign like other campaigns," explained veteran political strategist Tad Devine, who is advising the Vermont independent.

Forget for a moment the hair, the accent and the socialist inclinations — about which volumes have already been written. Sanders has set out to topple the most prohibitive presidential front-runner in recent memory: former secretary of state Hillary Clinton.

Sanders is no stranger to the role of the long-shot candidate. In his first four races for governor and U.S. senator in the 1970s, he never cracked the double digits. Even after his improbable, 10-vote victory in Burlington's 1981 mayoral race, he would go on to lose a 1986 run for governor and a 1988 run for the U.S. House.

"How many quixotic campaigns has he run?" asked John Franco, a Burlington attorney and longtime Sanders ally. "This is what he does."

Sanders is also known for hands-on — some might say controlling — management of his campaigns and Senate office. He has long relished serving as his own de facto campaign manager and chief of staff — roles that will be harder to play as the demands of a presidential campaign increase.

Even as he launched his campaign last week, Sanders struggled to identify who was running it.

"We've got a group, a team of people," he said, mentioning Devine and his partners at Devine Mulvey Longabaugh, a Washington, D.C., advertising firm. "They're part of it. It's the same part of the team. Yeah."

For now, advisers say, Devine is serving as chief strategist, while his partner, Mark Longabaugh, is running day-to-day operations from D.C. Devine served in top posts in the presidential campaigns of Al Gore and John Kerry; Longabaugh managed the New Hampshire efforts of Dick Gephardt's and Bill Bradley's.

In Vermont, Sanders' longtime state director and campaign manager, Phil Fiermonte, has moved mostly off the federal payroll to become the campaign's field director. Senate campaign staffer Nick Carter is also on board. And Senate spokesman Michael Briggs, who has frequently accompanied Sanders to Iowa and New Hampshire, is preparing to move over to the campaign.

"We've got lots of résumés and we're going to begin staffing up," said one adviser, who declined to be named. The campaign is close to signing a lease on a new, expanded office in downtown Burlington.

Kate O'Connor understands better than most what Sanders and his staff are up against. The Brattleboro native served as an aide to Howard Dean throughout his governorship and 2004 presidential campaign.

"The higher the stakes ... the harder it gets," she said. "There's all these new expectations on you. It's hard to differentiate who to listen to. We had people advising us to do things Howard would never do."

It remains to be seen whether Sanders will catch fire the way Dean did in the summer and fall of 2003. 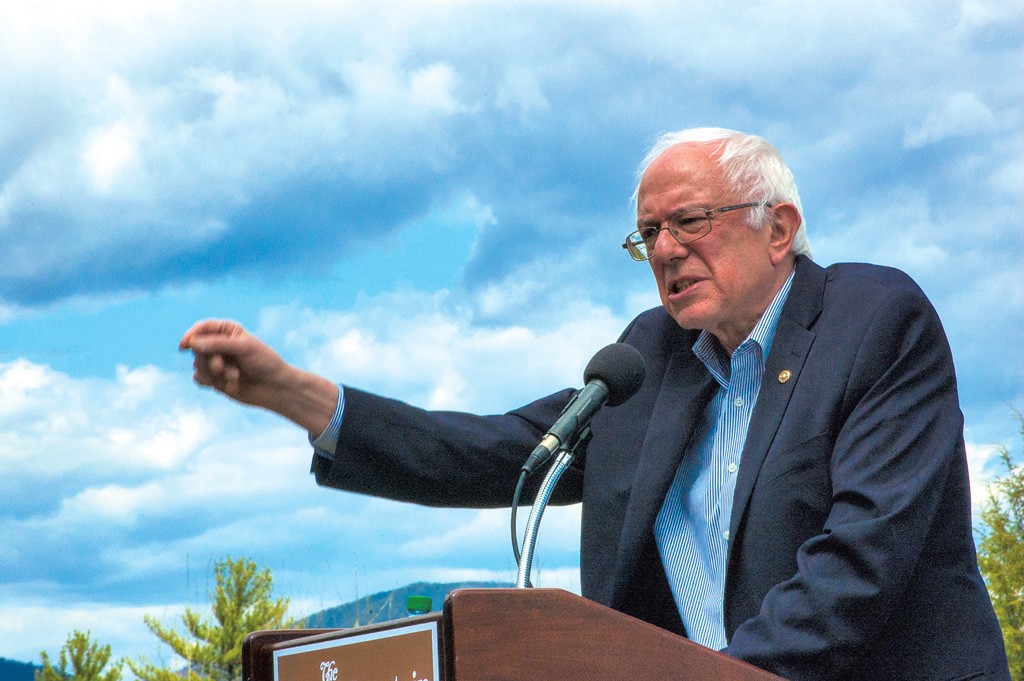 "It's completely unpredictable," said Dean, who endorsed Clinton long before either candidate entered the race. Sanders has a larger national following and a heftier donor rolodex than Dean did at an equivalent point in his campaign, the former governor pointed out, and the senator's lifelong passion for economic justice mirrors the mood of the nation.

"I do think his message is going to be very powerful," Dean said. "It's pretty good timing for him."

That much was clear last weekend during Sanders' 10th trip to New Hampshire since he began mulling a presidential bid last year — and his first since he officially joined the race.

"So many of the issues he stands for are what I care about — income inequality, money in politics, health care, education," said Eric Zulaski, an organizer with the American Friends Service Committee.

Zulaski and his wife, Elizabeth Ropp, welcomed Sanders and 130 supporters into their Manchester home last Saturday morning for the first of two events in the Granite State. As the candidate prepared to speak, audience members crowded into the living and dining rooms and listened through open windows from the lawn and porch.

"Today is amazing," Ropp said as she introduced Sanders. "He's the one candidate to honestly address issues. I give you the man of the 12-hour filibuster and the $12 haircut."

In a 32-minute speech, Sanders focused on the three issues his advisers say will dominate his presidential campaign: economic inequality, climate change and the influence of money in politics. He never once mentioned Clinton.

"We have a grotesque level of income inequality in which the billionaire class is getting it all," Sanders told the crowd. "It's like if we sat down to dinner — 10 people sit at a table to eat dinner — and one guy eats it all."

Devouring the candidate's message was Suzanne Healey, a first-grade teacher who traveled to Manchester from her home in Springvale, Maine. She came with her 89-year-old father, who brought a campaign donation, and 26-year-old daughter, who was simply curious.

"I was really excited to hear he was running," Healey said. "He may develop such a following that the Democratic Party wakes up."

In last week's interview with Seven Days, the senator acknowledged his fraught relationship with the party he has steadfastly refused to join but whose presidential nomination he hopes to secure.

"There's no secret that I think that the Democratic Party has not been vigorous enough in standing up for working families," Sanders said. "I've said that repeatedly, and I say it again."

He noted that he's caucused with the party throughout his 24 years in Congress, won its nominations for U.S. Senate and worked closely with its liberal wing. But that doesn't mean he considers himself a Democrat.

"No, I am an independent who is going to be working with the —" Sanders said, cutting himself off mid-sentence. "I am what I am, and I will have to deal with the state-by-state regulations. But I am what I am."

Franco, who served as assistant city attorney during Sanders' mayoral administration, says the candidate struggled with the notion of joining the Democratic primary.

"Bernie agonized over that, whether people would accuse him of being a hypocrite," he said.

But Sanders recognized that an independent run could split the liberal vote, as Ralph Nader did in 2000.

"He said, 'I'm not going to be a spoiler and elect a Republican,'" Franco recalled.

Sanders' far-flung base appears to have embraced the decision — and his candidacy. By Saturday afternoon, he'd raised more than $2.1 million and signed up 145,000 people to his mailing list.

"There's enormous interest in his candidacy," Devine said. "I think people are most impressed with the number of people who are signing up to volunteer — and that number is growing every day."

As Clinton's first challenger in the Democratic primary, Sanders drew plenty of press coverage when he entered the race last week. Sustaining that will be harder, particularly as candidates continue to flood the Republican primary. In the past few days, that field expanded to include Ben Carson, Carly Fiorina and Mike Huckabee.

Devine says the sifting process will soon begin: To remain relevant, candidates will have to hit a series of "objective benchmarks," from respectable polling in Iowa and New Hampshire to the demonstrated ability to run a national campaign.

Differentiating Sanders from the also-rans of the Republican primary, Devine argues, is his ability to go "beyond the sound bite." While he may be viewed in some quarters as a fringe candidate, Sanders has spent nearly two and a half decades in Congress and has the rhetorical chops to show for it.

That was clear Sunday morning during his inaugural campaign appearance on ABC News' "This Week With George Stephanopoulos." After Sanders cited Denmark, Norway and Sweden as exemplars of the democratic socialism to which he subscribes, Stephanopoulos said, "I can hear the Republican attack ad right now: 'He wants America to look more like Scandinavia.'"

"That's right. That's right. And what's wrong with that?" Sanders asked, highlighting the region's economic strengths. "Look, the fact of the matter is we do a lot in our country which is good, but we can learn from other countries."

As he has warned others since he joined the race, Sanders strongly suggested that Stephanopoulos take his candidacy seriously.

He smiled. "So I would say: Don't underestimate me."

Correction 5/11/15: An earlier version of this article said Bernie won his first election as mayor by 10 points. In fact, he won by 10 votes.