In 'Office,' Author Sheila Liming Examines Changes in Where and How We Work | Books | Seven Days | Vermont's Independent Voice 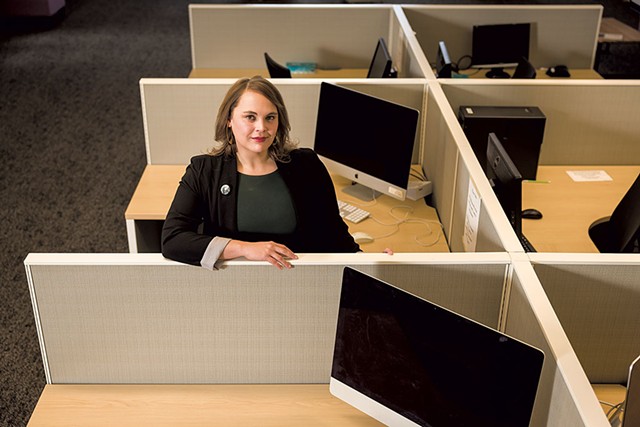 Long before many people abruptly shifted from working in an office to working from home at the onset of the pandemic, Sheila Liming was thinking hard about offices — specifically, their decline. While COVID-19 might prove to be a death knell, the office as we know it had been on its way out for a while. In her recently published book, Office, the Champlain College associate professor and recent Vermont transplant explores the history and culture of the office, the impact it's had on white-collar work culture, and the future of that work.

Liming takes the reader from secretary pools and desktop ashtrays to ultramodern, performative work spaces, including the Spheres in Seattle, Amazon's biodome-like structure where, she notes, very little work actually gets done.

Liming acknowledges how smartphones, laptops and readily available Wi-Fi have brought about a rise in telecommuting. But even before that, developments such as Microsoft Office, which debuted in 1990, replaced many of an office's physical necessities — typewriters, adding machines, graphic design tools — with software on individual computers.

Office, which is part of the Object Lessons series by the Atlantic and Bloomsbury Publishing, is actually Liming's second book of 2020. The first, What a Library Means to a Woman: Edith Wharton and the Will to Collect Books, came out in April. She became interested in objects and their significance when studying for her PhD in literary and cultural studies in a Carnegie Mellon University program that emphasized material culture.

"I was starting to see the growth of these really lavish fancy offices, especially in the tech sector. Then, on the other hand, a lot of my colleagues and I [were] mostly working in Starbucks," Liming said. "It was interesting to see that divide happening around me, especially in the early 2000s, and then following the financial crisis in 2008."

Next up, Liming is editing a new edition of the Edith Wharton novel The Age of Innocence. Seven Days spoke with her about her office research and what the pandemic might mean for our working lives.

SEVEN DAYS: This book was clearly finished before the pandemic struck, and now many of your predictions about the devolution of offices seem to be coming true. Does this timing feel like a lucky coup or a total nightmare?

SHEILA LIMING: It's a little bit of both. In some ways, I think the topic is never more relevant. A lot of people now are renegotiating their relationships with their offices, especially if they're not actually allowed to access them at the moment. What we're also seeing is, a lot of people are being forced to create their own offices, on their own terms, in their own homes. In that way, the timing was great.

On the other side of things, everybody started talking about offices and, unfortunately, I feel like the book might now get a little bit lost in the shuffle, because we've been talking about them for the past six months. 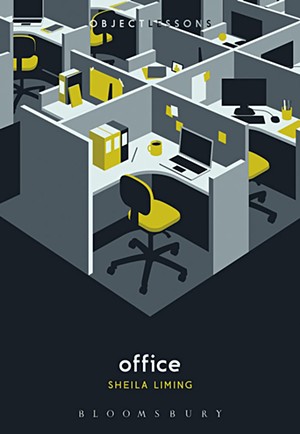 I was very interested to see that [a] company that goes by the name Dwellito sells these premade offices that come in shipping containers that can be stored in your backyard. It's, like, $36,000 to buy one of these things. And they come with a crane, and they drop it in your backyard — if you have one. It's all decorated, with rugs and chairs and everything. That, to me, suggests that some people out there are pretty desperate for office facilities, to have a space apart from their families and their domestic rooms.

SD: For me and a lot of people pre-pandemic, "working from home" actually involved working from a lot of places that weren't home, especially coffee shops. Now that I'm actually working from home, it's been really hard to maintain any sense of boundaries. Do you see this as a long-term trend, this continual erosion of separation between work life and personal life?

SL: I do. It's one that's been a while in coming, basically since we started to have tools that were previously used within communal office spaces that became personal to us, through our personal computers. It's just gotten more and more pronounced over the past several decades.

"If all your tools are stored in your laptop or your smartphone, then when do you ever stop working?" Sheila Liming tweet this

If all your tools are stored in your laptop or your smartphone, then when do you ever stop working? When do you cut off communications with your colleagues and cease to work? For most people, that's never.

SD: You wrote about offices that exist "not to facilitate actual work, but to exert a company's right to take up space." Do you think that's going to continue after the pandemic?

SL: I think it is going to continue, but it's not going to continue unilaterally, or for everyone. Once again, that's a continuation of a process we've already seen happening. Offices have started to serve as advertising, as billboards in themselves. I talked about the Amazon Spheres in the final chapter as being kind of a billboard for what Amazon is as a company. They have built a physical structure that they call an office but which nobody actually works in. You want to bring people into it to show off the company and what the company is capable of doing in terms of taking up space and also, of course, pumping capital into the space.

SD: So do you think it's just going to become more of a status thing, where companies that can afford to have offices will do so as a display of power or wealth?

SL: Exactly. Offices for the upper crust of employees in order to enforce the status of the company. It's just the majority of workers who now will no longer have access to that office.

SD: Another discussion in the book that I found particularly interesting was how the aesthetics of the office influenced the expectations for employees' appearances. You quote a secretarial handbook that says, "Typewriters are streamlined; secretaries must be too." How do you think the changing nature of our workplaces is influencing expectations around fashion and work wear?

SL: I wish I had a whole chapter on office fashion, because that would be fun. It always seems symbolic to me that a show like "Mad Men" — which launched in 2007 and is sort of obsessed with the aesthetics of the office, including fashion — came in a moment when offices are becoming less and less the norm. Even those who do have access to them are less frequently going to be seen by other people in the course of their job, because they're going to be doing a lot of their job remotely.

I think it's interesting that we see this doubling down in some of those cultural texts of "Oh, remember the glory days of the office when everybody was so nicely dressed?" which is presented as kind of a romantic image. Yet I think, with the transition to more remote work or more scattered and atomized work, we are going to see changes in fashion.

SD: A debate throughout the pandemic has been whether people are less efficient when they're working from home in their pajamas and less effective at their work. What do you think about that?

But in terms of efficiency, I think what we get is actually longer working hours spread out over more time, as opposed to these concrete blocks of time where you would have been focused on a task, within boundaries that were set for you by the natural workday. Now I can answer my email at three in the morning or on weekends or whatever. So I think, in the end, you're getting more work out of people under those conditions, not less.

SD: But do you buy into the notion that the decline of work wear will affect people's productivity?

SL: No. I don't think that you're going to be working less efficiently if you're wearing your pajamas.

What's fascinating is that I learned that they use the same machinery to make both of them, because they already had the assembly line in place for the making of the guns. It was only small differences in the process to make the typewriter.

SD: That is just ripe for some kind of "The pen is mightier than the sword" metaphor.

SL: I know. They're manufacturing two different kinds of weaponry at the same time.

The original print version of this article was headlined "Business Class"

Books Sheila Liming Office What a Library Means to a Woman