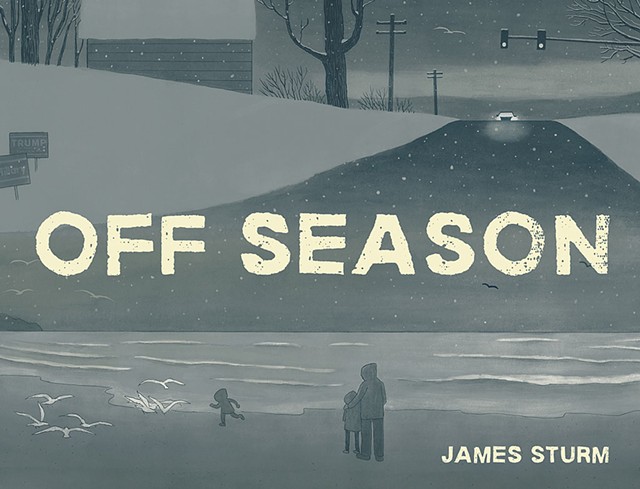 The publisher's description of Vermont cartoonist James Sturm's latest graphic novel, Off Season, starts with a question: "How could this happen?" The query could be in reference to events that trouble the book's central characters: a married couple's separation and Donald Trump's 2016 presidential victory over Hillary Clinton.

Through a series of vignettes over 216 pages, readers follow Mark, a builder and father of two, as he grapples with estrangement from his wife, Lisa, parenting their young children and coming to terms with the current political landscape. To make matters extra stressful, Mark's contractor boss is a fast-talking party animal with payroll problems.

Created through a combination of pen-and-ink and digital techniques, the characters are rendered as anthropomorphized dogs, a choice that, as writer Rachel Cooke noted in a review for the Guardian, "both mitigates the story's existential sadness and deepens it." Though they look like canines, their emotions — and those that their story evokes — are very human.

The vignette "Cookie Monster," for example, opens with a heartbreaking image of three cookies on a pan alongside a greasy outline where a fourth cookie used to be. Something is missing here, most obviously the fourth member of Mark's family.

This sense of loss is palpable throughout the book, but so is a sense of humor. Take the vignette "The Debate," which portrays simultaneous standoffs between father and daughter and husband and wife over the child staying up late to watch a presidential debate. The body language of and dialogue between the family members are at once starkly realistic and hilarious.

For Sturm, a Hartland resident who cofounded the Center for Cartoon Studies with Michelle Ollie in White River Junction in 2005, this foray into contemporary fiction is a change of pace. His best-selling 2001 graphic novel, The Golem's Mighty Swing, was set in the 1920s and centered on a barnstorming Jewish baseball team. (It was also ranked No. 1 in Time magazine's list of top 10 comics for that year.) Sturm's 2010 title Market Day explores art and commerce through the eyes of an early 20th-century rugmaker in Eastern Europe.

What inspired Sturm to forego historical fiction in favor of bipedal dogs with jobs, love lives and present-day political views? "I realized that I had been the victim of fraud," Sturm explains over the phone. In 2015, he says, he was ill treated by an unscrupulous contractor. The experience left him angry and ashamed — feelings that he channeled into art.

"Since I can remember, even when I was a kid, when life gets overwhelming, the thing I do is start cartooning," Sturm says. (Though cartooning helped him process his thoughts and feelings throughout this ordeal, he emphasizes that Off Season and its characters — contractor included — are works of fiction.)

The seeds of the story were planted with these cathartic cartoons. The political undertones came later as the 2016 presidential election season got underway. "I'm telling a story of contemporary fiction, and the election thing started happening," Sturm recalls. As the politics infiltrated the narrative, he recognized the parallel between the fractured unions of Mark and Lisa and of his fellow Americans.

As for Sturm's relationship with his own wife, readers shouldn't draw conclusions based on his imaginary furry friends. When the first of the panels that would eventually become Off Season were serialized on Slate in 2016, Sturm says friends reached out to express their concern about his marriage. "This isn't about my marriage," he says. "That part is totally fictional."

Sturm, who won the prestigious Eisner Award for Best Limited Series in 2004 for his comic book series Fantastic Four: Unstable Molecules, says fans should not anticipate a sequel to Off Season after the 2020 election. He is currently hard at work editing upcoming books by Vermont cartoonists Glynnis Fawkes and Dan Nott.

Released on February 5 by Montréal publisher Drawn & Quarterly, Off Season has already earned favorable reviews from the Guardian and Publishers Weekly for its emotional potency. In a review for Paste, Hillary Browne writes that "the book is more about the bubbling rage our economic system produces than about a specific flare-up of it in November 2016, and it's valuable in that way."