In New Stories, a Vermont Author Revisits Growing Up Italian 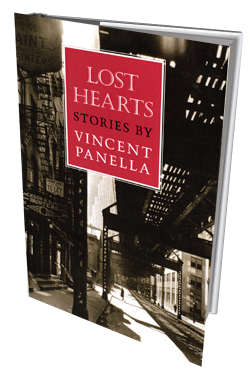 In the Italian-American world of Lost Hearts, a short-story collection by Marlboro writer Vincent Panella, one character literally towers over the rest: Aunt Gina in “The Orchid Room.” “Eat!” she commands the school-aged narrator and his cousins at the breakfast table as she stands over them wielding a wooden spoon. When the youngest, Anthony, a “showoff,” pushes his mother too far, Aunt Gina beats his head until the spoon breaks.

“Anthony rubs himself where she struck and finds blood on his fingers,” Panella writes. “‘You struck oil, Ma,’ he says.”

In a spare, Hemingway-esque style, Lost Hearts depicts the lives of lower-middle-class Italian families living in Queens and Brooklyn: men who work seven days a week as bar owners, abandoned but fiercely strong wives, cousins with unacknowledged connections to the mob. Though pervaded by violence, adultery and painful compromises, it’s a world Panella knew intimately and wants to preserve.

“This is a book that’s very close to me. All the stories are intensely felt,” he says, adding that he worked on them for 10 years.

Panella was born in 1939 in Manhattan and grew up in Queens. His grandparents came from Sicily and the Naples area in the early 1900s, and both grandfathers worked on the railroads. All this is recorded in his 1979 memoir The Other Side: Growing Up Italian in America, published by Doubleday. But he admits Lost Hearts draws so intensely from those memories that it could be called “an exaggerated or invented memoir.”

The stories follow a loose chronology, from “Original Sin,” set in Sicily during the land-reform movement of the late 1800s, to the closing story, “War and Peace,” a touching and undisguised glimpse of Panella’s elderly mother. Many of them are linked through the central character of Charlie Marino, a writer who, in “Chicken Feet,” “fail[s] to sell one story, or even to place one in a nonpaying literary magazine.”

It’s a familiar scenario among short-story writers — even one who, like Panella, attended the Iowa Writers’ Workshop and has already been published by the likes of Doubleday. (Panella also wrote a historical novel, Cutter’s Island, published in 2000 by Academy Chicago and reviewed in Seven Days.) “Stories are difficult to sell if you’re not a famous author,” he says.

So, Panella self-published to put Lost Hearts into the public’s hands. He created his own imprint, Apollo’s Bow, and contracted with BookLocker, one of a proliferating number of print-on-demand self-publishing companies. The whole operation cost about $4000, he says, a figure that includes hiring a locally based graphic designer to come up with the book’s look and mailing out review copies. He saved money by choosing a cover photo that was already in the public domain: a hauntingly empty black-and-white of the old Manhattan El by Berenice Abbott. Two photos of Panella’s young parents, to whom he dedicated his book, appear on the first and last pages.

His efforts have already paid off: Barnes & Noble is selling copies in 25 East Coast stores, including South Burlington’s, Panella says. Lost Hearts is also available as a Kindle or Nook download. Panella considered reissuing his memoir as an e-book, too, but found when he called Doubleday that they would be doing that instead. “The publishing industry is really behind the times,” Panella declares. “Even though that book isn’t a big seller, they don’t want to give up control.” According to copyright law, Doubleday owns the book “until 70 years after I go to heaven.”

Though Panella moved to Vermont in 1976 and taught writing at Vermont Law School until he retired six years ago, his Italian-American past still looms as large as Aunt Gina. “There are certain things you grind away at as a writer, that you can’t let go,” he says. “You write because you don’t want things to die, even though they were painful. If you’re a writer, you can bring them back.”