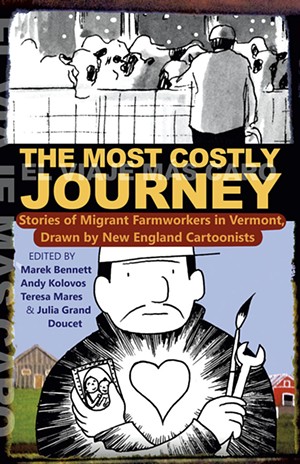 The story of Guadalupe unfurls over eight densely illustrated pages, heavy with ink and emotion, in the recently published The Most Costly Journey: Stories by Migrant Farmworkers in Vermont Drawn by New England Cartoonists.

It starts with 26-year-old Guadalupe on a harrowing 10-day journey from her native Mexico to the United States, where her father has gone to find work. "I was happy to see my father, but very sad for being in a place with a completely different culture, without knowing the people, the church or the food," the text reads in a panel depicting a black-and-white figure surrounded by shadowy gray people.

"This was the beginning of my American dream."

The Most Costly Journey, published in May by the Vermont Folklife Center, is a compilation of cartoons originally released in Spanish as individual booklets. Its 19 chapters use a wide range of cartooning styles and perspectives to bring to life the challenges that migrant farmworkers face, from debilitating loneliness to the constant specter of deportation. Two dozen members of Vermont's migrant farmworker community, all identified by pseudonyms, contributed their stories.

Besides their challenges, they shared their joys: the freedom that comes with earning a driver's license, the tight bond between a father and son, the rewards of planting a garden of familiar vegetables and herbs.

Published in English with a Spanish edition in the works, the book grew out of the booklet project that started in 2015 with the transformation of recorded interviews into biographical cartoons. The cartoon booklets have been distributed throughout the state to help farmworkers feel heard and show them that they are not alone, said Julia Grand Doucet, the outreach nurse who initiated the project.

"[It] took some weight off that I was carrying." Guadalupe tweet this

Doucet works for Open Door Clinic, a nonprofit that provides free health care to uninsured or underinsured Addison County residents. About half its patients are migrant farmworkers, many from Mexico.

The booklets, which are still in circulation, serve as "icebreakers" to help health outreach workers and farmworkers broach difficult topics, Doucet said. For example, someone might be sad about missing a family event back home, such as a daughter's quinceañera celebration.

"We could open up a conversation about how that must feel bad, and here's a story about someone who missed his daughter's wedding," Doucet explained. "It also allowed people to open up by reading someone else's story. They might read about alcoholism and be able to say, 'Oh, yeah, this happened to me, too.'"

Guadalupe, who has lived in Addison County for almost 13 years, shared her story in part to help other migrant workers, she said. Former Vermonter and Seven Days contributing cartoonist Iona Fox collaborated with her to create her narrative.

"The process was difficult: telling your story to someone you don't know, remembering what you went through," Guadalupe said through an interpreter last week at Open Door Clinic in Middlebury. "As time goes by, one must cope with it and tries to forget it." But, she added, the process "took some weight off that I was carrying."

Guadalupe's path to the elusive American dream took several nightmarish turns before it inched toward a happy ending. The cartoon depicts her splitting from an abusive partner only to find herself a new mother struggling through a Vermont winter without a home or a job.

"People think that crossing the border is the hardest part," Guadalupe says in the book. "But the worst part is finding a way to survive after you arrive."

An endnote to her story provides contact information for WomenSafe, an Addison County nonprofit serving victims and survivors of domestic and sexual violence.

Like many migrants, Guadalupe is undocumented, she said. Despite the risks of sharing her story publicly, she said she wants to support other women in similar situations and let them know that their legal status would not prevent them from getting help.

Doucet came up with the idea of marrying life stories with cartooning after multiple farmworker patients reported serious physical complaints that could not be traced to any specific medical cause. She concluded that the symptoms were precipitated by chronic stress and anxiety caused by isolation, insecurity and awareness of the dangers still faced by loved ones back home.

Around the same time, Doucet heard a radio broadcast about applied cartooning, or the use of cartoons to inform, educate and empower. The practice has proved especially effective in reaching people whose literacy is limited.

Knowing that talk therapy wasn't culturally familiar or accessible to farmworkers, Doucet hoped that encouraging them to share their stories might have therapeutic value. She found that "if you expressed interest, the stories just kind of poured out."

Doucet served as coeditor of the project, which was named "El Viaje Más Caro" ("The Most Costly Journey"), along with Andy Kolovos, associate director and archivist at the Vermont Folklife Center; Teresa Mares, an associate professor of anthropology at the University of Vermont; and Marek Bennett, a New Hampshire-based cartoonist and educator. UVM Extension's Bridges to Health program helped collect stories and uses the booklets in its outreach efforts.

The power of the booklets' stories, and the bravery of those who shared them, impelled Doucet and her colleagues to bring them to a larger audience.

"I struggled with what to do with what felt like a gift," she said. "You open up all of this trauma and kind of darkness. We're collecting these stories, but [the storytellers are] still left in that place. I feel like we can't just take it for granted, that we need to magnify it somehow."

All profits from The Most Costly Journey support Open Door Clinic outreach initiatives. Grants, community donations and a crowdfunding campaign provided income to pay the cartoonists, publish the booklets and books, and develop a guide to help community health workers use the materials for outreach.

Throughout the process of collecting the stories, translating them and transforming them into cartoon form, the storytellers' viewpoints and comfort levels were paramount, Doucet said. Each participant reviewed their cartoon in draft form and was able to request changes.

"We wanted to show their perspective, their interpretation and their understanding of their story," she said. "They have ownership of it."

Known as subject-driven ethnography, this approach is integral to the mission of the Vermont Folklife Center, according to Kolovos. "It's a collaborative process," he said.

The Middlebury-based organization has supported other projects documenting Addison County's migrant farmworker community and has hosted Day of the Dead celebrations.

Kolovos is a self-professed comics nerd who appreciates the accessibility and creativity of the medium. He and Bennett worked together to pair regional cartoonists with the stories.

One of the cartoonists is John Carvajal of Montpelier, who came on board in 2016 as a recent graduate of the Center for Cartoon Studies in White River Junction. He illustrated the story of Jesús that appears in The Most Costly Journey .

An illustrator as well as cartoonist, Carvajal grew up in Florida, the son of Colombian immigrants. He's not sure why his family left Colombia. "My dad doesn't really talk too much about that," Carvajal said, but he suspects it had to do with "the whole drug cartel situation."

Because he is a native speaker, Carvajal was able to work with the interview recording in its original form. Jesús' story included the all-too-familiar horror of a family member back in Mexico being threatened or kidnapped for ransom because relatives in the U.S. have access to cash.

But Carvajal gave that dramatic plot point only four panels. Instead of focusing on it, he portrayed unrelenting loneliness as the deeper wound. His illustrations show Jesús working with the cows, in a field and staring out the window — always alone.

"I think that's something that's kind of skimmed over a lot," Carvajal said, "just how hard it is when you're in a situation that difficult and you're so far away from your family."

Guadalupe concurred that leaving family, friends and community is excruciatingly hard. "To decide to emigrate requires great courage and strength," she said. "It is a difficult, painful decision [with] many dangers."

"Some people will say, 'Why do you come here?'" Guadalupe continued. "Everyone who is here, we have a great need to be here; otherwise we wouldn't come." Reasons include rampant gang violence and extreme poverty, she elaborated.

Doucet recently heard a story that motivated her to consider a second round of interviews and cartoons. An 11-year-old girl had a copy of The Most Costly Journey because her mother, who came from Mexico and has worked on Vermont dairy farms, helped with the project.

The youngster is not a big reader, Doucet recounted, "but her mom said she sat down with it and read it end to end without moving. When it was done, she said, 'Can you get me more of these?'"

The original print version of this article was headlined "Cartoon Collaboration"