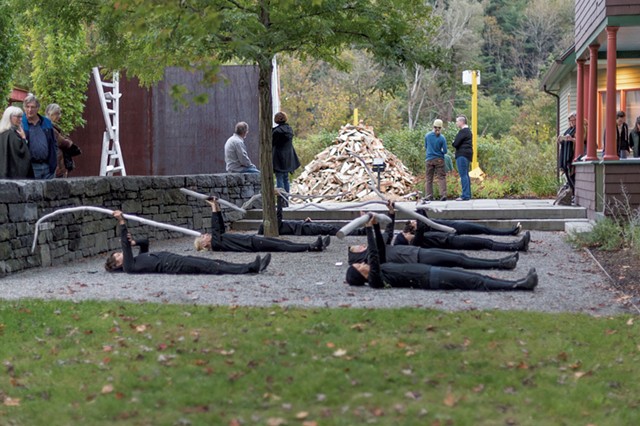 Before this fall, the Vermont Arts Council Sculpture Garden was a place where passersby on Montpelier's State Street could see outdoor artwork — the static kind. Every two years, with a small honorarium from the VAC, curating organizations such as the Carving Studio & Sculpture Center in Rutland or Helen Day Art Center in Stowe placed an exhibition of sculptures in the "garden," a rectilinear, gravel-surfaced space between the VAC's offices and the Capital Region Visitors Center. There the pieces sat until the next show.

This year, the VAC has taken a new approach by partnering with the Center for Public Art. That newly launched nonprofit in Morrisville is the brainchild of Michael Zebrowski, an assistant professor of art at Johnson State College and a conceptual sculptor trained in architecture. Zebrowski has already begun his collaboration with two artists who, like him, do site-specific work that responds to the natural environment: performance artist and choreographer Erika Senft Miller of Colchester, and conceptual sculptor Nancy Winship Milliken of Charlotte.

Aiming to "activate" the garden, says Zebrowski, the trio has created a series of installations — performative and sculptural — that are guided by the life cycle of stacked wood. "SiteTime: Cordwood" will unfold in a series of eight scenes over two years, with one occurring every three months, always during Montpelier's Art Walk. In between, the garden will display material evidence of each scene and the effects of time on those materials.

The only static part of the project is a concrete sculpture by Justin Kenney placed at the garden entrance; it consists of two roughly finished forms, one balanced on the other. Zebrowski chose it because it "is about capturing a moment in time," he says.

Perhaps the furthest thing from a traditional sculpture show, the project nevertheless harnesses the fundamental work of sculpting, which involves "adding and subtracting," Zebrowski explains, attributing that idea to Milliken.

The first scene, "Slumping," took place on October 6. It began with the dumping of four cords of firewood around a yellow-painted pole, which Zebrowski had anchored in a back corner. Deliberately built up high, the pile is expected to "slump" over time around the pole. Zebrowksi placed a tripod-mounted camera nearby to record the process in four photos a day until May, when the team will stack the wood.

While the wood and pole remain to weather the winter, the scene's performative element survives only in a time-lapse video by Micah Dudash (available on the CPA's Facebook page). Miller and six more dancers, dressed in black, lay supine in rows on the gravel for an hour and a half. For the duration, each dancer held aloft a long piece of driftwood, which Milliken had painted white and blackened around a central grip using the Japanese wood-burning technique shou sugi ban. The dancers could switch arms when tired. The performance was about "finding the balancing point that's the opposite of slumping," says Miller.

No music accompanied the performance and minimal movement occurred, but people who were out to see art, or simply heading through the garden to their cars, were intrigued. "One guy got off the bus and stayed for 45 minutes. He had a lot of questions," Zebrowski recalls.

Scene 2, "Falling," will take place in the garden on Friday, January 5, from 5 to 7 p.m. Evoking the felling of a tree, the dancers, dressed in white, will explore the "liminal space between standing and falling," says Miller, aided by Argentine tango techniques they learned from specialist Elizabeth M. Seyler (an assistant editor and proofreader at Seven Days).

Video of Scene 1 will be projected on them as they dance. Milliken's sculpture of lichen-adorned branches, bundled and cradled within a 5-foot-cubed steel frame, will be on display, and Zebrowski will be sharpening his ax to one side of the action.

Miller says the dancers have no plan of action for freezing temperatures. "Will it pull us indoors? Will we continue outside? That makes it exciting to me, that listening to the site," she enthuses.

Future scenes will address "Limbing," "Bucking," "Splitting," "Stacking and Drying," "Burning," and, as in a musical coda, "Slumping" again. Not every scene's content is nailed down yet; the experience of each will inform the subsequent one. Jokes Zebrowski, "We're flying the plane as we're building it."

As Milliken puts it, "We're hoping that site and time enter into our work, so that we're not held down to what we did a year ago."

The project's ongoing evolution also derives from the collaboration of three artists of very different stripes. Says Milliken, "It's like a stew that you keep adding your spices to. It gets better and better."

The focus on cordwood was curator Zebrowski's idea. The material is both ordinary and site-specific: Many Vermonters, including Zebrowski, heat their homes with it. Cordwood also marks a process of addition and subtraction over time, he notes.

Zebrowski's own "site-time-specific" works, as he calls them, have ranged from "Observatory," a viewing platform aimed at the North Star that he built on-site for "Exposed," Helen Day Art Center's outdoor sculpture exhibit; to "SURVEY," his project as the first Spruce Peak Performing Arts Center artist-in-residence in 2016. For the latter, he erected yellow-painted metal-pole structures on the Stowe Mountain Resort grounds, some resembling surveyors' equipment and alluding to the resort's massive, recently completed building projects.

Milliken sees cordwood as a "layering of the utilitarian and the abstract."

"Beauty and a sense of place are being represented, but you still have to cut wood," she notes. Or weave sails from netted wool that the wind gradually destroyed, in her 2014 outdoor installation "Windscape," for the group exhibition "Of Land & Local" at Shelburne Farms. "If we become too abstract, it falls dead," Milliken says.

For Miller, cordwood symbolizes "the work of the VAC: It fuels the arts economy. And if you get [VAC money], it starts a process that begets something greater. It plants a seed — like a tree, which sometimes takes a hundred years to grow."

Miller has choreographed site-specific performances for dancers inside a Vermont Railway salt shed and on the docks of Burlington's former Community Sailing Center, using dancers, kayakers and paddleboarders. "SiteTime" is an unusual pursuit for her because it's not a one-off, she notes; its evolutionary aspect means it is partly about the creative process itself.

"With my work, I need to have a level of curiosity and the unknown," Miller says. "Otherwise, why bother?"

The artists cite myriad artistic influences for "SiteTime," from Walter De Maria's "The Lightning Field," a grid of lightning rods in the New Mexico desert (Zebrowski); to performance artist Marina Abramovi, who once lived in a gallery room for 12 days on nothing but water (Miller); to Janine Antoni's installation "Tear," which displays a dented lead wrecking ball beside a video of the artist's eye (Milliken).

Ultimately, though, "SiteTime" is specific to Vermonters in that it encourages them to gaze at deeply familiar sights with a new perspective.

"I'm very much interested in pushing the boundary of what public art can be," says Zebrowski. "How do you bring something you might not expect? I think about someone coming across the garden at 3 a.m. I hope they wonder, What is this? What's going on here?"