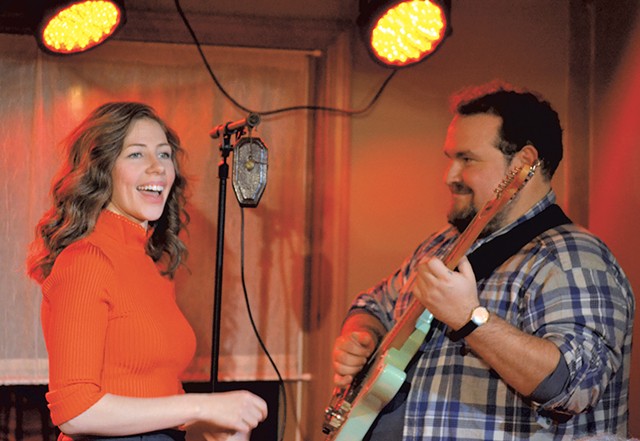 When Rachael & Vilray reached the end of "Do Friends Fall in Love," the duo lovingly locked eyes on the final, closely harmonized notes. As their dulcet tones evaporated into the ether, a hushed pause took over the room. Then, from an older gentleman in the back, came an audible whisper: "Holy fuck."

Everyone in the room was thinking precisely those two words, even if they lacked the temerity or the degree of awe-induced absentmindedness to say them aloud. It was a perfect response to a stirring moment in an evening full of them — moments aided in no small part by the unusual setting. Indeed, the older gentleman's foul mouth could have been a simple product of heightened relaxation, of feeling at home — Doug Hacker and Caroline Schneider's Manchester Center home, to be precise.

Rachael is Rachael Price, the vocal dynamo of jazzy Americana band Lake Street Dive. Her musical partner — who goes professionally by the mononym Vilray — is a well-respected Brooklyn-based guitarist and composer. For a month or so before this night, the duo had toured up and down the Northeast. Owing to the intimate nature of their music — mostly original guitar and voice compositions patterned on Tin Pan Alley-style songwriting and early pop vocal jazz — they'd played exclusively small clubs, such as Burlington's Light Club Lamp Shop. Every one of those shows sold out.

But it's unlikely any of them matched the warmth and, well, intimacy of this one, held on a frigid January night in the Hacker family's 800-square-foot open living room as part of their long-running Billsville House Concerts series.

Billsville shows don't happen on a set schedule; some months there are several shows, others none. Hacker and his family don't take any income from the shows, which they advertise solely though social media and the Billsville House Concerts website. That lack of financial pressure allows Hacker to book only when it suits him and his family — or when there's an act he really wants to see. Songwriter Nicole Atkins will play the next edition this Sunday, April 29.

"This is a very special place to play," Price told me during a set break, as she and Vilray tended their small merch table in the front hallway and chatted with guests.

Artists and concertgoers are discovering that special quality in increasing numbers. Even by house concert standards, Billsville stands out. That's partly due to the consistently excellent lineup of local and regional bands that play there. But it's also a product of the distinctly homey atmosphere that makes a show at the Hacker home feel less like a concert and more like Thanksgiving dinner — albeit with an extended family of about 70 people and a globally renowned band.

In the kitchen, attendees sipped BYOB drinks around an expansive island topped with an array of potluck snacks. (Guests are encouraged to bring food to share.) Others mingled by the large stone hearth or visited with the Hackers' dog, Indy, a friendly black Lab mix who tends to take up residence on the living room stage when it's unoccupied.

"He's the opening act," Hacker joked before the show as Indy curled up by the mic stand.

Hacker, Schneider and their two sons, Ethan and Kai, have been inviting bands, friends and total strangers into their home since 2011. At that time, the family lived in Williamstown, Mass. — hence the name "Billsville." They moved to Vermont in 2013, and have produced some 110 shows overall.

Most of these occur in their well-appointed post-and-beam Manchester Center house — or on the lawn, weather depending. They've thrown a few larger shows off-site under the Billsville banner, as well.

Plenty of locals have taken the Billsville stage, which is, in fact, an actual raised stage that Hacker built last year, outfitted with top-notch sound and pro lighting. Vermont acts have included Anaïs Mitchell, Grace Potter, Caroline Rose and Madaila.

Hacker has a knack for scoring up-and-coming national talent, too. Among the bigger names to play Billsville are Margaret Glaspy, Lucius and Lady Lamb.

"We've had some pretty cool bands here, for sure," said Hacker, 55, who works as a software engineer when he's not hosting the likes of Andrew Combs and Della Mae in his living room. And all of the ticket revenue goes directly to those bands, he added.

Genial and charismatic, Hacker is blissfully oblivious to the usual line between performer and fan — a line that, perhaps not coincidentally, tends to disappear at a Billsville show. On Instagram, for example, he frequently tags artists he wants to see with invitations to play at his family's house. And he aims high — like, Margo Price and Ryan Adams high.

So far, that gambit hasn't worked; Hacker has yet to score a dream act through a social media Hail Mary. But it's a solid bet that he will one day. After all, cold-calling one of his favorite songwriters is how Billsville House Concerts started.

Hacker is friendly with a Denver music fan named Heather Browne, who runs a blog called Fuel/Friends. One day, Hacker recalled, Browne announced that Austin, Texas, songwriter Joe Pug was playing a show at her house.

"I turned to my wife and said, 'Why isn't Joe Pug playing at our house?'" Hacker said.

Hacker looked at Pug's upcoming tour schedule and saw that he had a gap between shows in Boston and Toronto. So he emailed Pug's manager and offered to host the singer.

Thus Billsville was born. Since that show, Hacker has developed a network of contacts who help him bring bands to his southern Vermont ski town, despite its sleepy music scene. And he's developed a reputation among touring artists that draws in new acts.

As an example, Hacker related how he convinced songwriter Ruby Amanfu to play Billsville: After meeting her at the Newport Folk Festival, he had her get in touch with Rayland Baxter, a noted Billsville devotee. The Nashville, Tenn., country singer enthusiastically vouched for Billsville, and Amanfu played there a few days later.

While the music at Billsville may not always be as quietly transcendent as Rachael & Vilray's two sets — sometimes, Hacker said, it can get downright rowdy — the night wasn't atypical. And that's the kind of atmosphere that has fostered a devoted community of southern Vermont music fans around his home. The domestic setting invites a sense of neighborly fellowship that you're not likely to find at a nightclub or bar.

That was evident at the January concert. In the back of the long, open living room, near a Steinway grand piano, two middle-aged couples chatted on a couch. When they were asked how they knew one another, one of the women, Jacki Baker, said they had all met at a Billsville show a couple of years ago.

"There are lots of us who know each other just from coming to these shows," said Baker. "It's a real community atmosphere."

Hacker concurred, saying that he now considers many of his regulars friends. And sometimes he puts those friends to work.

Will Mosheim is a banjo player and luthier who makes guitars and banjos under the name Seeders Instruments. He's played Billsville on several occasions with various acts, including the "whiskey grass" band Gold Town. At that January concert, however, he was running sound, because Billsville's usual sound tech, Hacker's son Ethan, was away at college.

"[Billsville] is one of the most unique house concerts I've ever been part of," said Mosheim. He attributes that to the community Hacker and his family have built. "It's a whole family affair. It's a labor of love, and they put their heart and soul into it."

If someone is willing to open their home to total strangers for concerts, it's a good bet they love music. But, according to Ryan Chappell, mandolinist for the Hudson Valley, N.Y., band Upstate Rubdown, Billsville is a cut above.

"Doug and Caroline and the kids go out of their way to make you feel great, not just as a musician but as people," he said. "And that's really the whole point of a house concert."

Chappell was just a face in the crowd for Rachael & Vilray, but his band has played more Billsville shows than any other. He noted that Hacker and his family usually put artists up for the night in a suite in the basement, and they feed them well.

"This is the house concert by which we judge all others," said Chappell. "And it's a high bar."