In Lyndonville, Libbey's Meat Market Has Something for Everybody 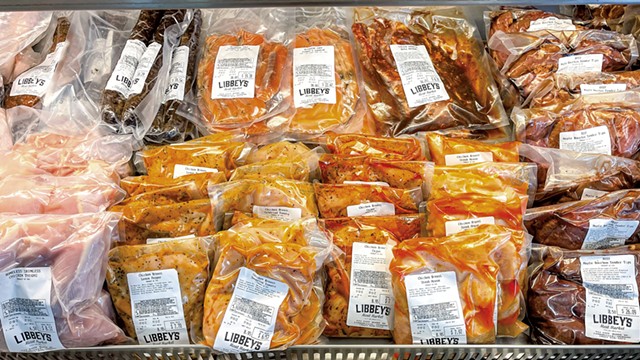 The first thing you notice is the smell of smoke, rising from a basket on the counter that's piled with glistening sausages. A nearby cooler is filled with canned and bottled drinks, avocados, rhubarb cakes, and picnic-friendly sides, including jalapeño coleslaw, pimento cheese and curried chickpea salad. Another cooler is packed with seafood: oysters, mussels, striped bass, lemon sole.

This is Libbey's Meat Market, a small storefront with a staggering variety of products on East Burke Road in Lyndonville. True to its name, the real stars here are beef, pork and chicken. An entire reach-in freezer is stuffed with flavorful sausages: cheddarwurst, bratwurst, chorizo, an onion-and-pepper version for sandwiches, and an herby one dubbed Simon and Garfunkel, among others. Dozens of vacuum-sealed bags hold chicken pieces drenched in colorful marinades.

Behind swinging doors, in a refrigerated room just steps from the sweltering kitchen, co-owner Cole Hunter and his crew break down beasts and birds into roasts, steaks, chunks, breasts and wings. The cuts, simple or seasoned, are sold to loyal locals and out-of-state campers alike.

"When you get something and you know where it came from... you feel better about it, and you feel good after you eat it." Cole Hunter tweet this

Since buying the shop from namesake Jim Libbey in late 2019, Hunter, 31, who owns it with Tabitha Bowling, has retained the best aspects of the previous owner's business model and added his own flair. He's brought in produce, dairy and other grocery items and amped up prepared meals, which were especially popular during the height of the pandemic.

At the edge of the parking lot, Hunter installed a rugged three-chambered smoker and turns out pastrami, kielbasa and brisket in view of passersby. He offers customers a choice of conventional out-of-state meat or pastured local meat — much of the latter from East Hardwick's Snug Valley Farm — all at reasonable prices. 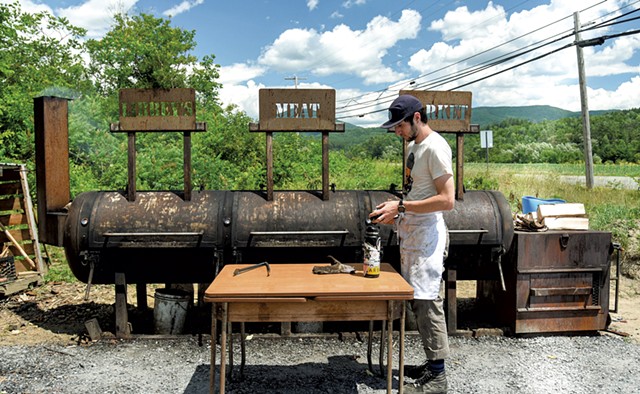 Hunter, a Lyndonville native, was a chef but not a butcher when he purchased the market. As a high school first-year, he'd been expelled from Lyndon Institute, and his mother put him to work washing dishes. Hunter found that being in the kitchen suited him, so when he returned to school, at St. Johnsbury Academy, he chose to take classes through the culinary program.

Hunter's teacher and mentor at the academy was none other than Jim Libbey. "When I was being a little shithead, he kept it real," Hunter remembered, noting that Libbey taught him organization and time management and instilled a good work ethic.

"He had some challenges in high school, but Cole's always had a good heart," Libbey said. "Also, you could give a lot of kids the same opportunities, but they don't [necessarily] have the ambition." 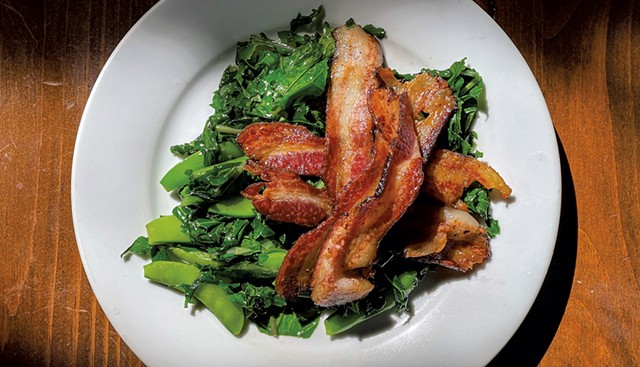 After graduation, Hunter landed a culinary apprenticeship that took him to New Hampshire and then to Georgia, where he met his future wife. They remained in the South for three years, which he spent working in a five-star restaurant.

Burned out from the high-intensity kitchen, Hunter returned to Vermont in 2015 and took a bartending gig at St. Johnsbury's Kingdom Taproom. Following that came stints at the Cellars at Jasper Hill, the Vermont Food Venture Center, Burke Mountain Resort and rek'•lis brewing company in Bethlehem, N.H. Hunter and his wife also welcomed the first of their two children.

Meanwhile, in 2013, two years after leaving his teaching job for medical reasons, Libbey had decided to open a butcher shop. The nearest such business, R & J Meat Center in St. Johnsbury, had closed, leaving a gap in the market.

Libbey chose a location that was off the beaten path, expecting to spend most of his time cutting meat for restaurants. "I thought we'd have 30 to 40 walk-in customers a week," he said. On its second weekend in business, 150 people walked through the doors. 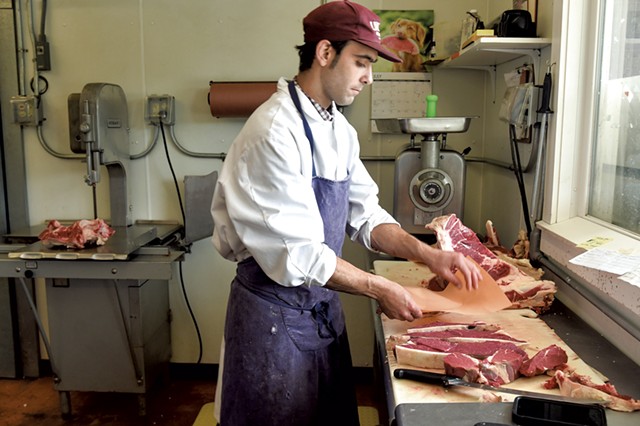 Bob Egizi, R & J's founder and an old-school New York City butcher, helped Libbey with logistics and eventually joined the team. "He trained all of us," Libbey said. "He does things in a way that they aren't done anymore."

By 2019, Libbey needed a break. He had a "great core group" of employees, he said, but he always needed a few more. "As the owner, you are always the one to fill in the gaps," he explained. "I was physically unable to keep up the pace."

When Hunter heard that his former mentor's business was for sale, he decided to check in — but not because he planned to buy the shop. "The situation just kind of unfolded," Libbey recalled. Egizi and Sue Burger, an aptly named former R & J staffer, both stayed to work for Hunter, and to teach him. 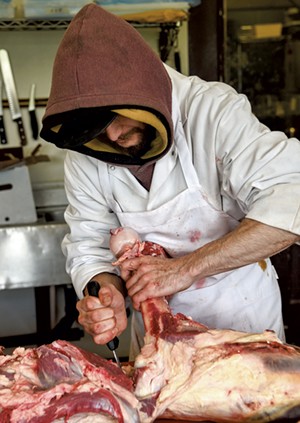 Peer through the windows into the staff-only cutting room, and the results of Hunter's hands-on butchering education are on display. On a recent hot Friday morning, as frigid air blasted the environs, Hunter and meatcutter Brock Morse deftly dismantled a side of Snug Valley beef as it hung on a hook from the ceiling. They worked as a team, using razor-sharp, slightly curved knives; a yellow-and-black DeWalt handsaw; and a standing Hobart saw that cuts through bones as if they were butter. The men passed ever-shrinking hunks of meat back and forth, placing the finished pieces into piles.

A few steps away, Burger was breaking down chickens, saving the backbones and scraps for stock. After hours of simmering, the stock would be made into gravy and served on made-to-order poutine, dotted with Sweet Rowen Farmstead cheese curds. On Fridays only, the kitchen also turns out crispy fried chicken.

The secret to his success, Hunter said, is a no-waste approach. Animal parts not fit for human consumption are sold as dog food. Chef Derek Hoyt uses delicious scrappy bits in takeout meals and sides. Any meat or fish that doesn't quickly sell ends up in the kitchen or on the smoker, transformed into something new and delicious.

Farmer Ben Notterman, co-owner of Snug Valley, likes what Hunter does with his meat. (Libbey's orders a whole pig per week and half a cow every other week.) "It makes me want to go buy my own stuff at Cole's shop," Notterman said with a laugh. "[He] rocks those smokers really well." 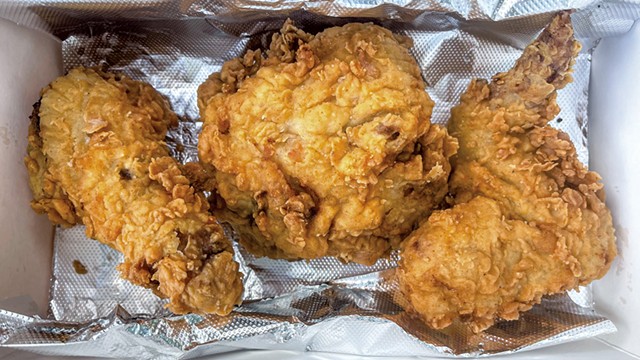 And, the farmer pointed out, the fact that Hunter sells both feedlot and pastured meat helps to highlight a "new normal" phenomenon: "The prices are narrowing between local products and the four big [national] beef processors," he said. People are saying, 'The price isn't that much different, and I can keep my food dollars here.'"

Libbey, who also sold local meat during his tenure, said some customers are totally committed to the buttery, grain-fed western beef, while others would rather go without than eat flesh from that far away.

Though Hunter is proud of all the meat he carries, he appreciates that the price of local has come down. "When you get something and you know where it came from ... you feel better about it, and you feel good after you eat it, because it's really good stuff," he said. "And there are some people who hear you say 'local grass-fed meat' and get food boners. They get all fired up." 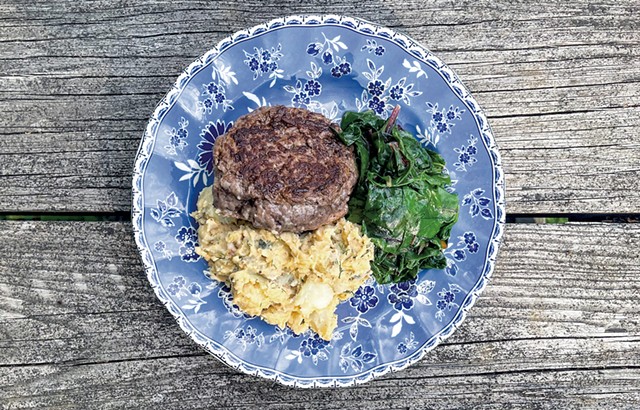 Home cooks aren't the only ones who think that the meat from Libbey's is worth the trip. Ryan Holt, co-owner and general manager of Kingdom Taproom and Kingdom Table, swings by once or twice a week to pick up burger meat, pulled pork and beef chunks for his restaurants. He's been sourcing meats from Libbey's since Hunter took it over.

Why drive to a butcher shop in another town when restaurant supply companies will leave goods on your doorstep? "They bend over backwards to meet our needs," Holt said, and "the quality is outstanding."

Libbey is delighted that his former student is running his old business. "I couldn't be more proud of what Cole's done here," he said, noting that Hunter has shepherded the business through a very difficult time with aplomb. "He built new relationships; he offered new services. He was able to maintain the quality of the food and meet the needs of the customers," Libbey observed. "A lot of people can cook, but not a lot of people can run a business. He's got the energy and the passion."

Creating a thriving business has fulfilled one of his dreams, Hunter said: "I just want to make a difference in the town I grew up in."