In Jennifer McMahon's 'The Invited,' the Ghosts Are Guests 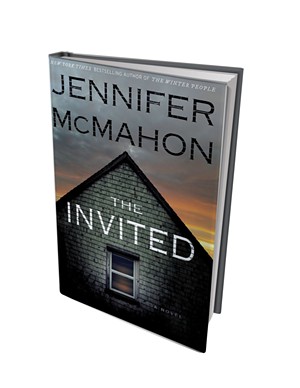 People move into haunted houses, sure, but who builds one? That's the central question of Montpelier writer Jennifer McMahon's ninth suspense novel, The Invited, in which the ghosts visiting a Vermont couple are valued guests, not intruders.

At least, such is the view of Helen, a history teacher who has just moved with her husband, Nate, from suburbia to rural Vermont. Hoping to start a new, more rugged life, they're building their dream home beside a bog "that, local legend claimed — the realtor said this with a chuckle — was haunted."

The novel's opening has already informed the reader that the legends are nothing to chuckle about. In 1924, the townspeople murdered a psychic named Hattie Breckenridge in that bog, convinced she was a witch. With the help of a local salvage store, a beam from the tree on which Hattie was hanged eventually makes its way into Helen and Nate's unfinished house.

There, in the novel's most chilling scene, Hattie's phantom manifests before Helen, stinking of the bog and speaking in a voice like "the sound of glass being ground up." While some of us might react by hightailing it out of that bog and never coming back, Helen is riveted by this radical version of living history. "What if objects didn't just hold memories," she wonders, "but held traces of the people who'd touched them...?"

Locals may detect a whisper of satire in this setup for a ghost story. What recent transplant to Vermont doesn't salivate over salvaged and reclaimed materials, rich with history? Helen is no different, except that the objects she collects — the beam, a load of charred bricks, a solid maple mantel — all happen to be associated with the gruesome and untimely deaths of members of the Breckenridge family.

When Nate learns about this unusual sourcing, he suggests it's "time for therapy. For someone to help you figure out where this need you have for these things is coming from." Readers may be wondering about that, too. We know that Helen loves history, that her parents died early, and that she's more pragmatic than Nate. But McMahon doesn't spin these wisps of characterization into a substantial enough tapestry for a psychological thriller.

Instead, the author keeps us busy with multiple viewpoints and mysteries. While roughly half the book is told from Helen's third-person point of view, the other half belongs to Olive, the couple's scrappy 14-year-old neighbor. Desolate in her beloved mom's absence, Olive is obsessed with finding a treasure she believes Hattie hid in the bog. A mutual fascination with the Breckenridge family's "dark history" draws her and Helen together.

For this reader, it was clear fairly early how the threads of past and present connected to solve the mysteries. Like many of McMahon's teen protagonists, Olive is a livelier and more layered character than her adult counterparts, yet her slowness to catch on can be frustrating. Why, for instance, does she take so long to question the townspeople's callous assumption that her mom ran off with a lover, when no evidence supports it?

McMahon's previous novel, Burntown, was a quirky, risk-taking multigenerational saga that leaned literary. With The Invited, she's closer to the familiar territory of her best-selling The Winter People: ghosts, spiritualists, folklore and dark secrets of the past seeking closure in the present. One motif remains constant, though: young women who are missing their mothers.

While ultimately not as scary as the scene of Hattie's first manifestation promises, the novel is rich enough in shivers to make a good fireside read for McMahon's many fans. It could also make them think twice about building their next cozy hearth from reclaimed materials.

The original print version of this article was headlined "Quick Lit: Hosting Ghosts"