In Hot Water? Chloramine Controversy Bubbles Up in Grand Isle 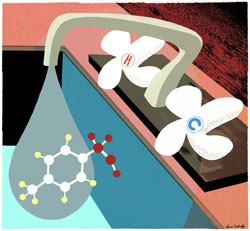 Six years ago, the Champlain Water District became the first in Vermont to introduce a water-treatment additive — monochloramine, aka chloramine — to the water supplies of 68,000 Chittenden County homes.

South Burlington resident Ellen Powell and several hundred of her neighbors declared war, claiming the chemical disinfectant was responsible for a host of their respiratory, skin and digestive problems.

Powell now uses 35 gallons of spring water every month to wash her face, brush her teeth, even cook. She showers at the YMCA in Burlington, where chlorine — not chloramine — is still the water department’s disinfectant of choice.

So far, no other local municipality has made the switch — but that could soon change, as small local water systems struggle to meet increasingly stringent quality standards from the Environment Protection Agency.

The next big water fight could be in the Champlain Islands, where the Grand Isle Consolidated Water District is weighing chloramine as a possible addition to its treatment facility. Water treatment and health department experts call the disinfectant a safe and economical alternative to chlorine.

But there was no mention of the chemical in a recent $400,000 bond vote that passed on February 15, according to Dick Dreves, chairman of the board of commissioners for the GICWD. That’s partly because water district officials aren’t sure they’re going to use chloramine yet — and partly because the topic has generated so much heated debate in the past.

“We realize it’s a very politically sensitive issue,” Dreves says, noting the Vermont Department of Health has advised against public mention of the chemical. “Because of that, we’re very sensitive about how we’re going to announce this.”

A flurry of emails on the subject obtained in a public records request by Vermonters for a Clean Environment suggests state officials don’t agree on whether omitting the word “chloramine” from the discussion was proper. Department of Environmental Conservation commissioner David Mears was referencing the Vermont Department of Health when he wrote about the “possibility that our two departments are taking a different stance on an issue relating to how much information about monochloramine should be shared with the residents of Grand Isle before they vote on a bond for improvements to the public water supply.”

Mears continued, “While we support the use of monochloramine … we do not want to be party to a process that withholds information that we know, from experience, may be of importance to some residents.”

Department of Health radiological and toxicological sciences program chief Bill Irwin — whose advice was referenced in an email Dreves sent to Christine Thompson, director of the drinking water and groundwater protection division — now says he did not steer the town away from transparency and regrets if anyone at the water district misunderstood his intention.

GICWD isn’t breaking any laws by tabling the chloramine discussion for the time being. A 2008 Vermont law requires water districts to hold informational meetings before changing water disinfectants — but so far, GICWD hasn’t submitted a permitting request to make any changes, and Dreves says it isn’t clear yet whether chloramine will be a necessity.

Whether it is or not, changes of one kind or another are inevitably coming down the pike for GICWD and up to 15 other water treatment facilities in Vermont that are struggling to meet certain water quality benchmarks set by the EPA.

Why? Although it has been used in drinking-water disinfection for more than a century, chlorine has its downsides. The biggest is that the chemical reacts with tiny bits of organic material in surface water to create what scientists call disinfection byproducts, or DBPs. Among the most troubling DBPs are trihalomethanes and haloacetic acids, which are known carcinogens. Drinking chlorinated water has been linked to a slightly elevated risk of bladder cancer and reproductive health problems.

That’s why, in 1998, the EPA cut back on the allowable amount of DBPs in drinking water. In the first of a two-stage approach, the EPA required water treatment facilities to monitor DBP levels and determine a running annual average across the system. The second stage — which goes into effect next year — will require those facilities to pinpoint hot spots in their systems, eliminating the opportunity to smooth out trouble spots by reporting only system-wide averages.

Grand Isle Consolidated Water District is already out of compliance on DBP levels, which leaves Dreves, and officials at other water treatment facilities, searching for alternatives.

Chloramine, which is already used to treat drinking water for an estimated 80 million Americans, is a relatively cheap fix. By contrast, an activated carbon filter — one alternative to chloramine for bringing down DBPs — would cost about 10 times as much per year as chloramine, according to DEC engineer Greg Bostock.

Despite Powell’s protests, officials consider chloramine a success in the Champlain Water District — the one Vermont system that’s adopted it. Trihalomethane and haloacetic acid levels have dropped off by more than 50 percent since the system phased in the new disinfectant in 2006.

CWD is the largest water district in the state — and not especially big by national standards. Still, says general manager Jim Fay, the EPA doesn’t grant exceptions to water quality standards based on the size of facilities. That leaves many of Vermont’s smaller water treatment facilities struggling to achieve compliance.

Given CWD’s success, and the constraints of small water systems, Ray Solomon expects more areas to make the switch. An environmental scientist with the DEC, Solomon says the key will be careful monitoring to make sure everything goes smoothly.

As for the strange reported health symptoms, Solomon says this: “Any time you have an oxidant in water” — such as chloramine — “there’s a certain potential there for a bad reaction from a certain segment of the population.”

That’s also true of chlorine, he adds. “There’s trade-offs in everything.”

For Powell, those trade-offs weren’t acceptable. She says her eyes burned in the shower. Her stomach ached. Her dog got sick after drinking tap water. She heard from about 300 other CWD users who were experiencing similar symptoms. Of those, about 65 demonstrated cause-and-effect evidence: When they stopped using CWD water, their symptoms vanished.

In the end, Powell says her complaints, and those of residents like her, didn’t matter.

“We hit a wall,” she says in a weary tone. “It was so depressing. We’d worked so hard, but we were up against the EPA and the state health department.”

Chloramine’s proponents in Vermont don’t deny the validity of these residents’ symptoms, nor does the EPA. In a 2008 letter to then DEC commissioner Laura Pelosi, an EPA regional administrator wrote that the agency empathizes with suffering residents, and “acknowledges that there may be sensitive individuals within any community who may react to any number of environmental exposures.”

Meanwhile, state toxicologist Sarah Vose says it is incredibly difficult to correlate the reported symptoms with tap water. Vose points to a physician study from 2008 in which only two of 80 surveyed physicians thought the symptoms described might be attributable to patients’ drinking water. Vose admits there hasn’t been a large-scale epidemiological study on chloramine, but says that’s because current circumstances haven’t warranted further investigation.

That leaves concerned citizens like Powell in something of a Catch-22 when it comes to chloramine, she says. While the EPA and Department of Health rely on physicians’ expertise to understand public health risks, those same physicians have no epidemiological or public health studies on which to base their diagnoses. For that reason, Powell never saw a doctor about her symptoms: She simply switched to spring water.

“Don’t bother going to the doctor,” a defeated Powell says, in direct contradiction to advice offered by the Department of Health and water treatment experts. “If you bring up, ‘I think it’s the tap water,’ they just laugh at you.” …Who would ever think it was your drinking water doing that to you?