In Greensboro, Bard-Inspired Summer Theater - and a Stage? 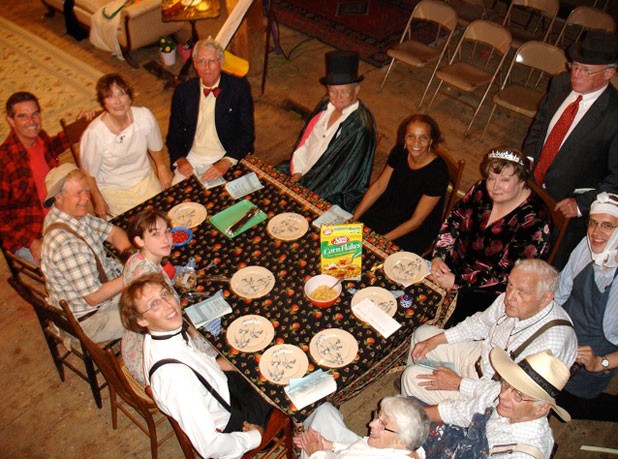 Imagine it: a replica of the Globe Theater on the edge of a popular baseball field in the white-clapboarded village of Greensboro.

Sound farfetched? Maybe, but the idea is no more whimsical than, say, a circus compound in Craftsbury (Circus Smirkus), a theater beside a sheep pasture in Marshfield (Unadilla Theater), or world-famous puppeteers (Bread and Puppet) on a farm in Glover.

Greensboro is home to one of the most exclusive summer-resident enclaves in Vermont. If New York City-based actor-director — and part-time Greensboro resident — Sabra Jones McAteer has her way, it will get its own theater company and a version of the Globe to boot.

The building project is officially offstage at the moment, but James Sowles, another summer resident, has offered to donate a 4-acre parcel behind the baseball field for the Shakespearean theater in the round. McAteer says her nonprofit group, the Greensboro Arts Alliance and Residency, is moving forward slowly on the project, in part to gauge the community’s reaction. “We want to make sure the town wants it,” she says.

At this point, no one seems to know how the softball-loving locals will react to an Elizabethan structure just beyond the outfield. But one thing is certain: Because the site includes a wetland, the group will need to seek an Act 250 permit, according to Sowles.

In the meantime, GAAR is providing an outlet for residents’ thespian tendencies. McAteer, who recently bought a house on Main Street, has enlisted local talent for a series of dramatic readings for two years running. This year she’s embarked on an ambitious summer schedule that includes “table” readings of Romeo and Juliet and The Cherry Orchard and a staged reading of The Importance of Being Earnest. GAAR’s tour de force will be a full-stage production of a new adaptation of Peter Pan.

It’s an ambitious schedule, given that McAteer has a full-time gig in New York City as founder and artistic director of the Mirror Repertory Company, which just staged John Colton’s play The Shanghai Gesture at the Julia Miles Theater.

Why bother with small-time community theater in Vermont’s Northeast Kingdom? What interests McAteer is the raw enthusiasm and personal commitment that amateurs bring to a production, she says. That’s what led her to a career in teaching and repertory theater in the first place.

McAteer, who grew up in a small town outside Los Angeles, left California at 18 to study acting at New York University’s Tisch School of the Arts. She performed the lead in Butterflies Are Free, and soon afterward met and married John Strasberg, son of Lee Strasberg, who was the longtime artistic director of the Actors Studio. Many a future movie star developed his or her method-acting chops at that famous nonprofit “laboratory.” In 1983, McAteer and John Strasberg founded the Mirror Repertory Company. (The two are now divorced.)

“I began to teach acting and discovered that I really liked working with people who were interested in the art of acting as opposed to being famous; [people] who were serious about it, who viewed it as a craft to be learned, just like with learning to play the piano or singing opera or anything else,” McAteer recalls. “It’s a real skill worth knowing, and it’s rewarding in and of itself.”

Her satellite program in Greensboro is an extension of that philosophy. One of the first thespians she met there was Rosann Hickey, a longtime Vermont director and actor who has staged productions for Unadilla and the Lamoille County Players. Hickey is directing the theatrical readings for GAAR. She says one of the advantages of a table reading for a play such as Romeo and Juliet is that voice carries the day. You don’t have to rely on physical type to cast the part. In theory, a 40-year-old mother of five could play a 14-year-old Juliet. “It sort of doesn’t matter what someone looks like as long as they have verve and can throw themselves into it,” Hickey says. (She suggests that sometimes it helps to close your eyes as you listen.)

What Hickey finds particularly gratifying about GAAR’s theater productions is that participants let normal social boundaries — age and social status — fall away as they perform under the spell of a play. “The guy who handles your recycling could be Benvolio,” she notes.

And the gal who plays Juliet might be a professional actress from New York. This, too, is part of McAteer’s vision. She hopes eventually to bring members of the Mirror Repertory Company to Greensboro for mixed productions with local actors. Wonder how that would play out in the round?

Readings of The Triumph of Love, July 31; Romeo and Juliet, August 14; The Cherry Orchard, September 7, all at 7 p.m., at the Greensboro Library, presented by the Greensboro Arts Alliance and Residency. Full production of Peter Pan, August 14-17, at the McIntyre Barn, times TBA. Staged reading of The Importance of Being Earnest, August 28 & 29, 8 p.m., at the United Church of Christ.