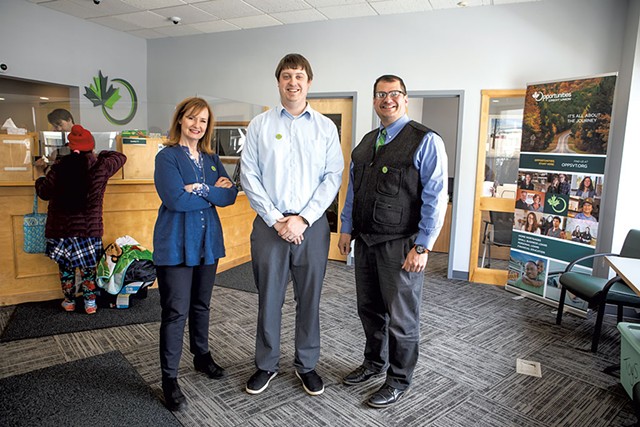 When Natalie Miller and Nathan Hartswick sought a loan to open a comedy club in Burlington, the reaction they got was no joke.

"We went to a bunch of different banks and credit unions, and no one thought it was a feasible business idea," Miller said. The husband-and-wife comedy impresarios were industry veterans after eight years of lugging sound equipment to their shows in venues around Vermont. But their plan to renovate a building for a club scared off conventional lenders.

"There had never been a comedy club in Vermont before," Miller said. "They were like, 'Yeah, we don't think it's going to be successful.'"

The two eventually prevailed at Opportunities Credit Union, a tiny Winooski-based lender that was created to serve the businesses that larger institutions might turn away. Opportunities discussed the concept with them in-depth; Miller said she got to know the lending officer personally. She and Hartswick opened Vermont Comedy Club in a former armory on Main Street in 2015 and now offer shows five nights a week.

Institutions that offer that sort of personal service and flexible lending are becoming scarcer in Vermont. Like companies in other sectors, Vermont's banks and credit unions have been consolidating over the years into larger institutions.

The latest proposed merger involves the two largest credit unions in Vermont: the Vermont State Employees Credit Union, known as VSECU, and New England Federal Credit Union, or NEFCU. The two have applied for regulatory approval to become one entity. With assets of nearly $3 billion, it would be the largest financial institution based in Vermont.

Some of VSECU's champions are not happy about the prospect. Former CEO Steven Post and two former board members, Jerome Diamond and Kimberly B. Cheney, both former state attorneys general, say it would undo the hard work that went into creating a credit union designed to focus on its members' needs. They've created a website, callingallmembers.org, to make their case.

"This year VSECU will be celebrating its 75th Anniversary and in honor of that occasion the CEO and Board of Directors have decided it is time to merge VSECU out of existence," the website says. The credit union has been open to anyone in Vermont, not just state employees, since 2009.

Banks and credit unions provide very similar services, but banks are usually for-profit businesses that serve customers, while credit unions are nonprofits that are owned by the members.

"If you're a co-op member and you are one vote out of 70,000, that's a much stronger voice than one vote out of 160,000," Post said. He's hoping members will speak against the proposed merger at VSECU's annual meeting on Wednesday, March 30. A formal vote on the merger, though, wouldn't come until after regulators approve it.

While VSECU's leaders describe the proposal as a chance to provide better services, such as more online offerings and more branches, Post's group says VSECU is doing just fine on its own.

"We all worked really hard for a lot of years to create a Vermont credit union that was really custom-built for Vermont," said Post, who served as the credit union's CEO from 1989 to 2013. "We think it's worth preserving."

NEFCU is Vermont-focused, too. Based in Williston, it was started in 1961 as the credit union for IBM employees. Most of its branches are in Vermont's northwestern corner, though it acquired a Detroit credit union in 2014 and has five employees there.

Like independent country stores, dairy farms and a host of other businesses, small, independent local lenders were once a mainstay of Vermont's cities and towns. The number of banks peaked in 1925, with 59 state-chartered institutions. Credit unions proliferated in later decades; in 1968, 72 of them were based in Vermont, according to the Department of Financial Regulation.

By 2020, consolidations and closures had reduced the number of locally chartered banks to six and credit unions to 20.

In recent years, larger regional and national banks have absorbed small, independent banks. Others, such as Chase, have opened Vermont branches for the first time.

The mergers leave Vermont's smaller lenders as lifesavers for nontraditional borrowers. They can provide flexible, personalized loan access that is vital but impossible for larger lenders to offer because of their more rigid guidelines.

She described how the credit union helped get a single mother's family back into their home after a bank foreclosed on it. The family had been living in a car. Opportunities connected them with grants and other assistance and offered financial counseling.

Opportunities is a community development financial institution, which means it has access to federal guarantees for some of its loans. That means the tiny credit union, with assets of $53 million, can take some risks other lenders might not. But even without that advantage, there's a place in the market for small, for-profit banks that don't have a social mission.

Local entrepreneurs have proposed establishing the Bank of Burlington to help fill that niche. They've gotten initial approval from the state to open the first business-to-business lender in Vermont. It would also be the first new state-chartered bank since the Bank of Woodstock — now part of Bar Harbor Bank & Trust — opened in 1989.

Like other small lenders, it could employ more flexibility in lending, taking into account intangibles such as borrowers' business acumen, said Mike Pieciak, the commissioner of the Vermont Department of Financial Regulation.

"They would look at, 'Will this benefit the community?'" he said. "And sometimes, they'll use their discretion to make loans that, on paper, may be more risky than they otherwise would like to do."

Andy Buxton made the rounds of area lenders when he was trying to buy Orwell's general store in 2015. But he didn't have the cash to put 20 percent down.

"They wouldn't take the risk with us," he said. So Buxton headed down the street to the First National Bank of Orwell.

Buxton grew up in town and has known the owners of the 158-year-old, family-owned bank for most of his life. It gave Buxton and his wife, Mary, the loan they needed, and they bought Buxton's Store in 2017.

The bank knows the history of the store and its customers well enough to be confident that the business will succeed, said Bryan Young, the Orwell bank's president and CEO. With assets of $84 million, it's the smallest bank in New England, Young said.

Underwriters at large out-of-state banks might not recognize the value of a general store with low margins and an upstairs apartment where the owners live. But Young sees the store as a critical institution in the town — and a good risk.

"We look at it and say, 'Andy and Mary, their heart and soul is in the business,'" Young said. "We know the location of the store and what the clientele looks like and how important it is to the community. We have just about every country store within our lending area as a customer for that reason."

Officials at the two merging credit unions, as well as Pieciak, noted that being bigger has advantages, too. Lenders that grow larger have access to economies of scale that enable them to offer the latest digital tools and security options, said Yvonne Garand, VSECU's senior vice president for marketing and business development. And with its greater assets, the new entity would be better positioned to focus on the environmentally conscious banking and affordable housing that has been a priority at VSECU, she said.

The merger would also allow NEFCU to enter the field of cannabis-related lending, something VSECU is already doing, Dwyer said.

"It's the type of thing we'd have to invest in and develop on our own, when they already have that capacity and have demonstrated it," Dwyer said.

But loan officers at the larger institutions must follow rigid guidelines that rule out quirky projects and unconventional borrowers, Pieciak said.

"As you get bigger, by necessity you need to become more bureaucratic," he said. "It's just the nature of what happens."

The merger will need an OK from federal regulators before it goes to VSECU members for a vote.

No one expects all 70,000 members to weigh in. For example, Garand said she expects 100 to attend the virtual annual meeting on March 30, when members will vote to elect directors and disburse charity money. (Under federal regulations governing such mergers, NEFCU members don't have a vote because they would be acquiring VSECU and would not give up their name in the transaction.)

NEFCU expects the merger to be final late this year or early in 2023. Once it's complete, Dwyer said, the newly formed organization will talk about what its name should be.

Will its customers recognize the larger entity for all the reasons they were drawn to credit unions in the first place?

Miller, of the Vermont Comedy Club, said the loan from Opportunities has changed life for a lot of local performers, some of whom have moved on to larger stages. The club's shows often sell out. Its improv and standup comedy classes fill up fast. She and Hartswick recently opened a café in the space. The club paid off its loan in February.

"They understood what we were trying to do," she said of Opportunities. "Having this community space where people can come and be with their friends and try out new stuff and have a good time has allowed people to get better faster, and it's kind of putting our scene on the map."

Correction, March 30, 2022: A previous version of this story misreported the process for naming the new entity.