In the epilogue of his latest book, Endpapers: A Family Story of Books, War, Escape and Home, Vermont author Alexander Wolff offers a provocative assessment of global affairs: "...for the moment, Germany is doing a better job of being American than America is."

Wolff, a Sports Illustrated writer for 36 years and the author or editor of nine books, is musing on his newly realized dual citizenship. He believes that holding a passport to both Germany and America is "a symbolic way of urging the best of each to regard the other as an example."

For Wolff, that's a hard-earned revelation.

In 2017, he spent a year in Berlin with his wife and two children to research his family history. In doing so, he unraveled family mysteries spanning two continents, three generations and several decades of world history.

"My dad is a kind of North Star for me in the telling of the story." Alexander Wolff tweet this

Wolff's grandfather was Kurt Wolff, an influential German book publisher who backed works by Franz Kafka, Franz Werfel, Karl Kraus and many others whose books would be banned and burned by the Nazis. Kurt fled Germany in 1933, a day after the Reichstag fire, first for France and Italy and then for New York City. There, with his second wife, Helen, he founded the celebrated Pantheon Books, most famous for publishing Boris Pasternak's Doctor Zhivago.

But Kurt's son Niko, Wolff's dad, stayed with his mother, Elisabeth Merck, in Germany, where he was reluctantly conscripted to fight for the Nazis in World War II before immigrating to America. While Wolff knew some of his father's history, it wasn't until he went to Berlin that a fuller picture began to emerge.

In Endpapers, Wolff explores a complicated family history, including sometimes-shocking revelations about certain German relatives' roles in World War II. But the book is also an often-moving portrait of his own relationship with his father and grandfather. And it's a snapshot of two countries grappling with the rise of disturbing ideologies that hark back to a dark, shared past: Four days after Wolff and his family landed in Berlin, white supremacists, many sporting Nazi paraphernalia, marched on Charlottesville, Va., chanting, "Jews will not replace us."

SEVEN DAYS: You moved your family to Berlin for a year, so you obviously knew there was a lot to uncover about your family. But were you prepared for the depth of what you found?

ALEXANDER WOLFF: I really had no idea. I knew that my grandparents, being literary people, wrote letters and kept diaries, and a lot of that stuff had been preserved. But what I wasn't prepared for was how much was in archives. 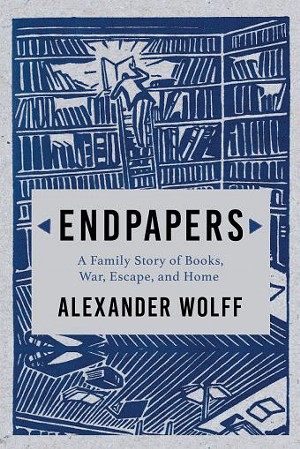 My dad was not a literary person. But he was a faithful son, and he wrote almost every week back to his mother in Munich during World War II while he was deployed. My grandmother saved every one of those letters, returned each to their envelopes. My dad, in turn, saved them and translated them from German to English for my sisters and me. So that was a real window into what his life was like during that time.

I read a lot of histories and memoirs of the period to try to get context. And I rummaged through the family stuff. And the other piece, because I'm a journalist and figured I should try to play to whatever strengths I might have, was to record and reflect on what was going on in the world while I was uncovering this stuff.

SD: Such as the rise of nationalism and neo-Nazism in America and Germany. That certainly lends the book an urgency it might not otherwise have had.

AW: The irony weighed pretty heavily. When Charlottesville happened four days after we arrived in Berlin, I felt like that was a message to me. I also felt that what was going on in the States put me on more honest footing with Germans, because I had come from a place that was essentially a glass house, so who was I to throw stones?

It wasn't just that there might be parallels between the two countries — I'm very cautious [about] drawing parallels with Nazi Germany to anything. It was also this sort of reversal of roles. You had German Chancellor Angela Merkel playing a role that you would recognize in virtually any other American president of either party: leading the world to attack these common crises.

In the case of Merkel, it was welcoming all these immigrants, which the U.S. not only has a history of but had this specific history of not only welcoming as an expat my grandfather, but then allowing my dad — who couldn't even get a passport in 1948 — welcoming him as a student to come to the U.S. to study.

AW: It never came up. And I would probably have wanted to read up on where the Boy Scouts stand on a few things if it had.

In the moment, I didn't entirely understand why my dad was so adamant about that, though over the years I could kind of fill in the blanks. But there were moments like that growing up in the 1960s where his past kind of rose up and loomed over us. And very quickly it would recede and everything went back to the idyllic '60s suburban life.

But if moments like that didn't occur, I would have been puzzled. Because my dad went through an awful lot, and the idea that you can simply sever all that because you've emigrated and assimilated — and he did a great job of that — human beings aren't made that way.

SD: Your dad was captivated by Watergate. What do you think he would have made of the Trump impeachments?

AW: The greatest sin to anybody in my family was to be vulgar. And, surely, even his supporters would concede that Trump had vulgarian tendencies. My dad would have seen the demagoguery, the vulgarity, and would have cried for the country, he so believed in democracy. And even more than the four years of Trump, the January 6 endgame would have left him bereft. In many ways, I'm glad he didn't live long enough to see it.

He would bring up often with me, and sometimes in letters he'd write to the local papers, how democracy is something you have to be vigilant in protecting. And that was hard-won. He was only 12 when Hitler came to power, so he had no agency in trying to stop it. He was someone who was really caught up in the events of history.

SD: There were other family members who did have a choice, though.

AW: I tried to write the book through as nonjudgmental a lens as I could when it came to my dad. Because there were certainly other family members who did have agency and did things for which they deserve to be called to account.

My dad is a kind of North Star for me in the telling of the story. His dad had gray areas in his personality and the way he behaved — and certainly we all do. But for the most part, my dad was very honorable.

SD: You include a quote from your grandfather early in the book about why he wasn't interested in memoirs: "What one can write is not interesting; and what is interesting, one cannot write." If he had written a memoir, how do you think your project would have been different?

AW: I did feel there was this sort of vacuum telling his story, which is such a poignant one. It wasn't just that he built this publishing house, then the horrible Weimar hyperinflation, and then the rise of the Nazis. It's that he then comes to the U.S. and does the same thing, but he's publishing books in a language in which he was never fluent. And then he's essentially chased into exile again. He's a double exile who just kept getting up off the carpet.

I don't know that if he'd written a memoir he would have gone into all that. He was stoic. And he was raised to see stories in others and to midwife the stories others wanted to tell.

SD: What would he have made of Endpapers?

AW: If you go to that comment he made, "What one can write...," he may not be totally approving of what I wrote. But I would hope that if he read it, he would find it interesting, engaging and compelling, moving in parts, as a document about his extraordinary life. The double exiles thing again is something that, until I dug into the story, hadn't really occurred to me.

But it's the tragedy of the immigrant, really, that you have to hoist yourself by those bootstraps multiple times. That he was able to do it again a second and third time, it's a story of triumph. I hope he would recognize that, if he were to slog through it.

The original print version of this article was headlined "Paper Trail"