In Clay Mohrman's 'Radiant Thought' Exhibition, Everything Is Illuminated

Clay Mohrman's installation "Radiant Thought" might be the most comforting artwork ever. As you enter the darkened second-floor gallery in Burlington's BCA Center, parting heavy curtains to do so, the suspended assemblage greets you with slowly pulsing lights. You're immediately aware of sound — oceanic oscillations, a heartbeat, a disembodied female voice.

"As you settle into the space around you, find a comfortable place to observe," she says invitingly. You sit on a nearby bench, obeisant. The voice continues on, gently guiding your awareness to your breath, your hands, the top of your head. Finally: "Visualize your entire body, in this space, right here, relaxed and at peace. Can you see it?"

While this calming audio is essential to "Radiant Thought," the tangible installation is an eight-foot sculpture that seems to hover in the middle of the room. Its spherical shape is created with several thousand narrow strips of white Plexiglas, interspersed with 24 round LED bulbs that intermittently go off and on, dim and brighten. Upon closer inspection, you can see the nearly invisible filaments that suspend each of the sculpture's pieces from a windowpane-like structure on the ceiling.

In the darkest season, and after a very dark year, visitors are likely to find this multisensory masterpiece as soul soothing as it is beautiful. That's essentially what the artist had in mind — though he couldn't have anticipated Gov. Phil Scott's pandemic prescription to "light the way" in Vermont.

Those who can't make it to the gallery in person can still seek out the virtual exhibition tour available on BCA's website.

Mohrman, a 29-year-old Burlington designer best known locally for his lamps made with driftwood, created "Radiant Thought" as a "personal response to emotional processing and managing anxiety," according to the website. "The sculpture was my attempt to make some more personal work," he elaborated in a phone interview. "Lighting is notorious for helping anxiety. I work with it every day, so it was easy to connect."

Stressing the therapeutic impact of art in public spaces, Mohrman said his installation is "imbued with purpose." And achieving it required the inclusion of some state-of-the-art technology. Mohrman credited University of Vermont senior George Philbrick with building a computer using Arduino components that controls the pacing and interaction of light and sound in "Radiant Thought."

"We are exceptionally pleased with it," said Heather Ferrell, BCA's curator and director of exhibitions. "I so enjoyed working with Clay over the past two years. And people have really enjoyed going to the second floor after seeing 'Unprecedented?' — about the depressing events of 2020 — and being able to relax." She wishes she had another place to install the work, she said, after this exhibition closes. 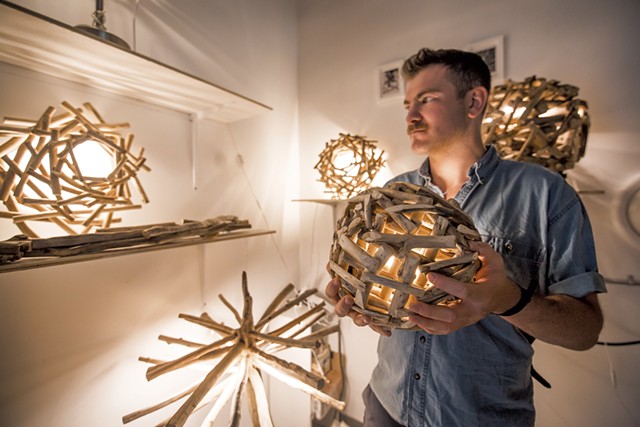 Not surprisingly, Mohrman's early forays into illumination were more rudimentary. Originally from Boston, he fell in love with lighting while studying product design at Central Saint Martins, a constituent college of University of the Arts London. His first creation was "a portable lamp you can carry around," he said. The joke at school, Mohrman added with a laugh, was that "your last main project would turn out to be your career."

Indeed, he then went to work for a lighting company in Massachusetts. "I was the only creative in a sea of engineers," he said. "I basically made the [fixtures] pretty, and they designed the guts. I learned a lot."

After Mohrman moved to Burlington four years ago, he decided to work with wood — specifically pieces of driftwood — that he began to craft into sculptural lamps. A year later, he participated in the Jump/Start program at the city's maker space, Generator. "We were guinea pigs in the best way possible," Mohrman said, explaining that the course aims to help artist-entrepreneurs get a handle on "the financial side, marketing, where and how to sell."

Though Mohrman initially worked from a small studio at S.P.A.C.E. Gallery on Pine Street, he's now at Generator full time. His lamps will be available for sale from his revamped website, he said, beginning in January.

He has previously made some larger-scale sculptures, including a pair of illuminated wood pieces — a four-foot-diameter sphere and an 18-foot archway — for the Lodge at Spruce Peak in Stowe. But "Radiant Thought" is Mohrman's most ambitious and multifaceted work to date.

To prepare for creating it, he considered more than its physical manifestation; he also studied how the brain processes information. "The piece is a loose metaphor for the neural network — the patchwork of explosions that happen in our brains," he said. And it was through his personal struggle with anxiety, Mohrman noted, that he found meditation. Hence the installation's audio component, voiced by his friend and collaborator Brittany Mae.

What's next for Mohrman? He'll continue creating unique lamps for customers. But he also aims to make "purpose-driven work, manipulating the viewer to have a specific response," he said. "I'm really looking forward to pursuing this thread."

The original print version of this article was headlined "The LightStuff | For sculptor-designer Clay Mohrman, everything is illuminated"