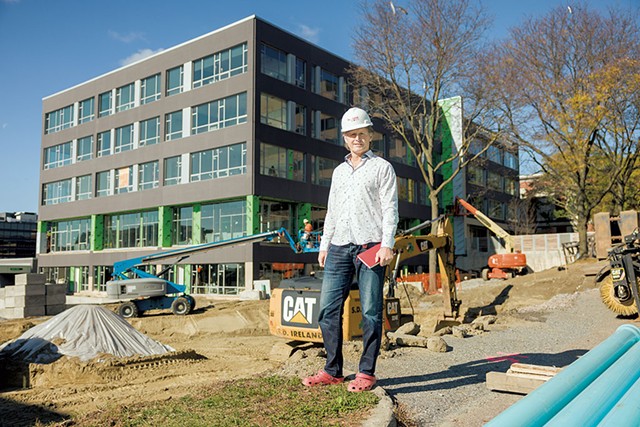 More than 1,000 new apartments are expected to be ready for occupancy in Chittenden County by the end of 2022. But they probably won't make a dent in the area's housing shortage, planners and analysts say.

It will take years of construction before Vermont's most populous county reaches a healthy balance between the number of homes available and the number of people who need a place to live. The legislature and Gov. Phil Scott's administration directed $144 million in COVID-19 relief money toward affordable housing this year, but that cash isn't going to solve the problem, either.

"It's a bit like turning an oil tanker," said Shaun Gilpin, housing program administrator at the Vermont Agency of Commerce and Community Development. "We had a real serious issue before the pandemic, which has only exacerbated things. There needs to be a much more concerted effort to get us where we'd all like to be."

"Our sense is that there's a larger market that wants to move here that can't find housing." Charlie Baker tweet this

Chittenden County's population grew slowly, by just 12,000, between 2010 and 2020, according to the U.S. Census Bureau. But it's growing faster now, as out-of-staters arrive and the economy expands. Many newcomers have told real estate agents that they're attracted to Vermont's COVID-19 safety record; others consider the state a refuge from the climate crisis.

The explosion of need over the last several years has prompted private commercial real estate developers to build more apartments. Doug Nedde, who cofounded Redstone, struck out on his own seven years ago and undertook some smaller-scale apartment projects, renovating 30 units in Middlebury and 12 in St. Albans. This year, he's working on three apartment projects, including one in Burlington that he's building from the ground up.

Nonprofits such as Champlain Housing Trust, which develops and manages affordable housing, are using state and federal funds for grants and loans as incentives for developers to build apartments for people with lower incomes. Many groups define affordable housing as costing about one-third of a family's income.

A $37 million state housing bond in 2017 supported the construction of hundreds of affordable apartments around the state, many in Chittenden County. But the increase in supply is merely keeping up with population growth, not addressing a long-standing backlog of need. Housing remains scarce and expensive.

"Our sense is that there's a larger market that wants to move here that can't find housing," said Charlie Baker, executive director of the Chittenden County Regional Planning Commission.

About 30 percent of the county's housing stock is rental properties, Baker said. He's part of a group called Building Homes Together that is looking for ways to develop more affordable housing, as many as 750 units each year, in northwestern Vermont.

The group's members want officials to remove redundancies from the state and local zoning process, which Baker said adds to the expense of building new homes. They'd also like to see more flexibility in federal mortgage programs so that more home buyers could qualify.

Publicity about the housing shortage has prompted some local officials to acquiesce to developments they might not have before, said Regina Mahony, planning program manager at the Chittenden County Regional Planning Commission.

"When there are housing projects going through development review, it's not to say we don't face any opposition; we certainly do," she said. "But more people understand that their children can't afford a house in the town they live in; their employers can't recruit new employees here because you can't find a house you can afford. It's more of a real issue for more people."

There are some signs of progress. Between 2016 and 2020, about 1,000 more homes were built than during the previous five years, according to Mahony. Most of them were apartments or duplexes.

"There are lots of folks putting the pedal to the metal here," she said.

Most of the Chittenden County apartment buildings are going up in Burlington, South Burlington, Colchester and Essex, said Brad Minor, a commercial real estate analyst with Allen, Brooks & Minor who interviews developers to create a near-term forecast of multifamily housing construction. Minor predicted that 497 new units will be ready for occupancy in the county this year, and 535 next year — though he cautioned that the latter number includes projects not yet under construction.

The annual average for the last 10 years was 425 units.

With apartments in short supply, prices have risen sharply. While Burlington and South Burlington require developers to offer a certain proportion of new apartments at prices for people with low and moderate incomes, there aren't enough units for those who qualify. That means organizations such as Champlain Housing Trust have a long waiting list.

Nedde, who recently completed work on an apartment building at 77 Pine Street in Burlington, set the base rental prices at $990 for a loft, $1,178 for one bedroom and $1,345 for two bedrooms. He said all the apartments were snatched up four months before they were ready.

"We had several hundred applicants for 49 apartments," he said.

Developers are still building freestanding homes, but they are increasingly out of reach for many. The cost of construction materials, land and labor has driven up the price of a new three-bedroom home by 25 percent in the last two years, said Denis Bourbeau, president of the Vermont Builders & Remodelers Association. Before the pandemic, about three-quarters of the homes Bourbeau built sold for between $250,000 and $300,000 — within the means of many first-time home buyers.

Although he's making money from the surge in demand, Bourbeau's not happy about its long-term impact.

Jenifer Ketchum, who recently moved to Vermont with her husband for his new job as an electrician, said she knew that the couple would have trouble finding a rental. It's just as hard in Nashville, Tenn., where they grew up, and Florida, where they'd been living, she said.

"The pay is the same; the rental market is the same; buying a house is actually cheaper here," said Ketchum, who has been staying in a campground for three weeks while the couple looks for a rental near Waterbury. They've found places, but the ones in their price range have been snapped up before they could make an offer, she said.

Nedde is pursuing two other apartment buildings — one in downtown Burlington and one in Winooski — that he expects will be ready for renters after 2022. The Winooski project is slated to include a parking garage and 50 to 80 apartments. The nine-story, 49-unit building at 79 Pine Street in Burlington, where there was a groundbreaking on Monday, is getting $1 million in COVID-19 relief through the Vermont Housing & Conservation Board. That body administers federal grants and loans for affordable housing construction.

Nedde said he expects the demand for rental housing to keep increasing.

"That's what we have been seeing in the last 24 months," he said. Without the $1 million grant and a sales tax break worth $480,000 from the City of Burlington, Nedde said the project would not have been financially viable.

"I have faith that apartments in downtown Burlington will be a good investment," he said. "But to launch these housing projects, you have to be incredibly creative and fortunate. It's a very difficult environment to provide housing."

The original print version of this article was headlined "Building Backlog"