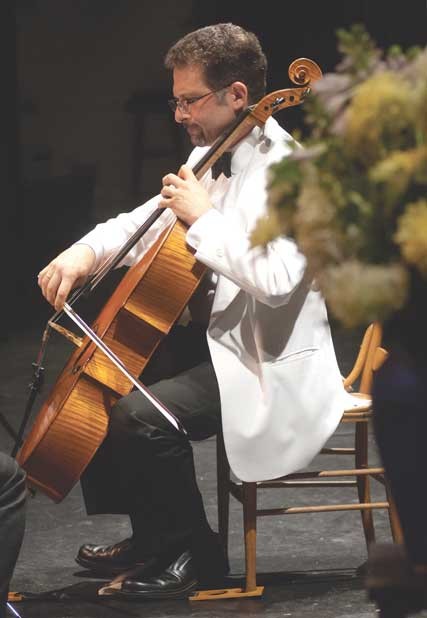 Cellist Peter Sanders didn’t know what was in store for him when he arrived at his mother’s Randolph home in the summer of 1992. He had been playing the four previous summers in a friend’s chamber-music festival in Crested Butte, Colo., but had no plans for that season. He soon discovered that his mother and Laura Morris, then-director of Chandler Music Hall, had hatched a festival in Vermont for Sanders to run.

“So it’s my mother’s fault,” Sanders, now 51, says with a laugh about the origins of the Central Vermont Chamber Music Festival, which is about to begin its 21st season.

CVCMF is one of several August festivals that occur in rural spots around the state, including in Greensboro, Craftsbury and Adamant. As of last year there’s a new competitor in the category of impossibly small towns playing host to quality classical-music festivals: Jamaica. Flutist Susanna Loewy started the Pikes Falls Chamber Music Festival there last year.

Out-of-state musicians apparently just like to come to Vermont. Sanders, who lives in New Jersey, typically draws CVCMF’s performers from among his fellow musicians in the New York Ballet Orchestra (of which he’s been a member since 1999) and the Stamford (Conn.) and Riverside symphonies. There can be no “wild cards,” he explains, because of the intense week of rehearsals preceding the festival.

The two-week festival centers on two ticketed weekend programs at Chandler, with encore performances in Montpelier and Woodstock.

Programming this year folds in several pieces Sanders calls “off the beaten path” between Brahms and Beethoven warhorses. Longtime festival violinists Arturo Delmoni and Basia Danilow, Sanders’ wife, will join pianist Jung Lin on Shostakovich’s Five Pieces for Two Violins and Piano. Sanders and violist David Cerutti will play a 1949 duo by Walter Piston, an American composer and theorist who studied with Nadia Boulanger in Paris and taught Leonard Bernstein.

And “Breakfast with Bach” — a Sunday-morning breakfast upstairs in Chandler, followed by a concert in the church across the street — will feature VYO violinist Julia Deziel, Delmoni and a small VYO ensemble, led by the organization’s director-conductor Jeff Domoto, playing Bach’s Concerto for Two Violins, Strings and Continuo in D minor.

Sanders, who has an 8- and a 10-year-old, hopes to draw children of all ages to a kids’ concert featuring Trinidadian steel-pan music by Island Time Steel Band, followed by ice cream for all. Island Time will also give the free finale concert in the town gazebo.

The cellist has kept his festival small and manageable in part because it’s been “a family operation”: Sanders acted as unpaid administrator until a couple of years ago, when he began giving himself nominal remuneration. This year, however, he is planning on a second annual fundraiser to pay for an administrator. Both his children, he explains, are lobbying for him to spend less time on the computer.

The festival’s main fundraiser will continue to be the annually sold-out gala dinner for 60, organized by Randolph resident and Chandler board president Janet Watton. This year, the chef is pianist Lin, with Sanders as her sous-chef. Watton says she is cooking up 13 different desserts for the occasion.

Among the diners will be New Yorker cartoonist Ed Koren, who lives in nearby Brookfield. He has donated several of his quirky creations to support CVCMF; Sanders will use Koren’s 20th-anniversary homage, titled “All About Community,” again this year. It features an ensemble of hairy, string-playing woods animals seated on a log, while other animals pop in from the trees for a friendly listen.

CVCMF audiences, of course, have the benefit of Chandler’s famous acoustics. (The hall was recently lauded in Yankee Magazine’s Best of New England 2013: Editors’ Choice.) But the spirit will likely be just as free.