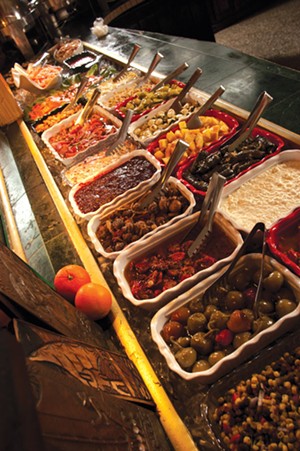 A man with a sword usually signals danger. But at Souza's Brazilian Steakhouse, it's the equivalent of a dinner bell. There, young men dressed in wide-legged gaucho pants bring rock-salted meat to your table — on a giant skewer.

Sound exotic? It is; Souza's is Vermont's only Brazilian restaurant. Service at the steakhouse is rodizio-style. That means the food is cooked on the sword using a method known as churrasco. English translation: Everything, including veggies and fruits, is barbecued over imported Brazilian wood. A salt crust brings out the natural flavors of as many as 14 different kinds of meats.

When the gaucho comes bearing a dish they want to try, such as filet mignon rolled in bacon, diners show a green card that reads, "Sim, por favor," encouraging him to approach.

As more exotic dishes, such as chewy chicken hearts pass by, all but the most adventurous eaters flip the card from green side to red. 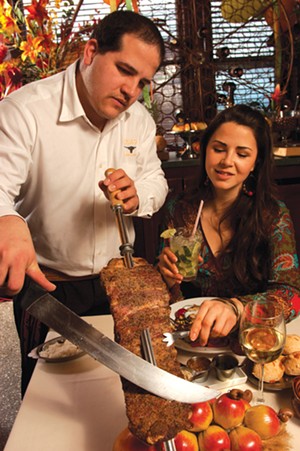 Those who say, "Não, obrigado," to all meat can seek out the salad bar, which features everything from exotic salads with palm hearts to good old Waldorf. The hot bar has fish dishes, polenta cakes topped with red sauce and garlicky sautéed vegetables.

A range of tropical juices, including passion fruit, guava and cashew fruit, pair marvelously with pão de queijo, the chewy Brazilian equivalent of a gougère. To the strains of samba legend Jorge Aragão, the gauchos keep on coming; it's all-you-can-eat. If lemon-tinged lamb is your favorite, have at it. Crispy chicken thighs are delicious alongside rice and beans.

If there's still room for dessert, the dolce de leche, coconut pudding and cheddar cheese with guava paste are all excellent options. Prefer a postprandial digestif? Local Eden Ice Cider is available at the bar, but for a true taste of Brazil, try a house caipirinha, the country's national cocktail, made from lime and a sugar-cane-derived alcohol called cachaça.

This article was originally published in 7 Nights: The Seven Days Guide to Vermont Restaurants & Bars in April 2011.