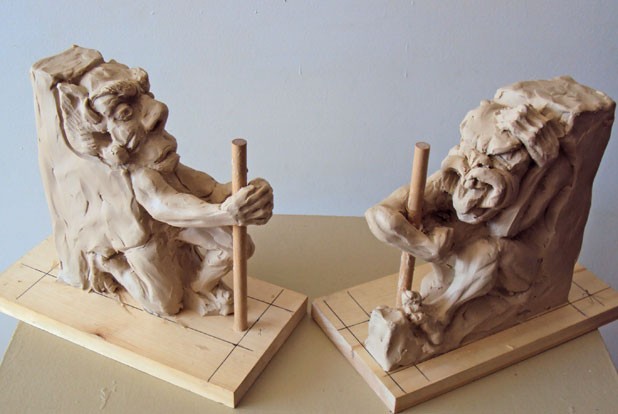 When Barre businessman Charles Semprebon died in 2009, the 66-year-old left more than $2 million to his city. About half of it — $500,000 each to Barre City and Barre Town — was earmarked to complete the bike path that links those two communities. The rest was intended for civic improvements to the city, one of which is the addition of several new outdoor stone sculptures.

About $100,000 has funded the Stone Sculpture Legacy Program, which Studio Place Arts director Sue Higby hopes will boost Barre’s civic pride and restore its reputation as a prominent art city. Four granite sculptures are currently in the works, and several more will be commissioned over the next couple of years.

“Stone has huge stage presence,” Higby says. And granite, Barre’s signature resource, is especially showstopping. “It’s a very hard stone, it’s hard on your body,” Higby continues. “And it lasts forever. People who are into it are swashbuckler artists who kind of have this artistic war every day.”

One of those contemporary swashbucklers is Plainfield stone carver Heather Milne Ritchie, who grew up in Barre and was selected by a jury of local artists and art supporters to create a sculpture that speaks to Barre’s blue-collar work ethic. “Coffee Break” recreates a scene of turn-of-the-century stone-carver downtime: Resting amid stone blocks waiting to be carved are lifesize lunch pails, coffee cups, various tools and the paper hats carvers made from Italian newspapers to keep the dust out of their hair.

Ritchie, 37, who apprenticed under Barre stone carver George Kurjanowicz, worked as a union member in the Barre granite sheds between 1999 and 2004 and says the daily scheduled break, at the 9:00 whistle, is much the same now as it was a century ago. “We’d all sit around and talk together and eat together,” she says.

Her new sculpture will take up residence in the plaza of downtown’s new Barre City Place, directly across the street from the shed where “all the master carvers used to come out and have their smokes and brag about their sculptures,” says Higby.

Ritchie would like to see people use the sculpture in a similar way. “I’m hoping that as people come and sit on them that it activates the piece, that the people who sit on them take on the role of the granite workers,” she says.The other stone works to be sited around the city are Barre artist Giuliano Cecchinelli Sr.’s classical figurative sculpture of the city’s namesake, statesman Isaac Barre, and two artful bike racks: Calais artist Chris Miller’s two granite gargoyles in the midst of a tug-of-war with a serpentine rack; and Giuliano Cecchinelli Jr.’s granite jack-in-the-box, the spring of which serves as the rack.

Biking became a passion for Charles Semprebon later in life, says his brother, Tommy Semprebon. The businessman had been an active skier and aviator, but as he neared retirement, troubles with his back led him to take up biking. He dreamed of completing a cross-country trip, which is what he was doing when he died in New Mexico, headed east from California.

Charles wrote up his will right before he left for that trip. “He knew it wasn’t right; it was too open-ended,” says his brother, who serves on the Semprebon Fund Committee. “We’re trying to work with what we have.”

Charles’ priority was to complete the Barre bike path, but Tommy says he’s happy to see the sculpture projects taking off, as well. He selected the Stone Sculpture Legacy Program from hundreds of proposed projects because, he says, “I just love history.”

The Semprebon family history reads like the story of Barre itself. Charles and Tommy’s grandparents emigrated from Italy in the early 20th century, an era Higby describes as “like the gold rush in California — families came to stake a claim.” Semprebon’s grandfather owned a stone-carving shed, but, like too many carvers in the area, died at a young age from silicosis, the tuberculosis-like illness that results from breathing the particulate matter of stone.

“You’d cough until you died,” explains Higby. “No one really understood the illness at the time. But some of the really fantastic pieces in Hope Cemetery were carved by master carvers who knew they were dying.”

After the elder Semprebon died, his wife converted their Barre home into a boarding house. During Prohibition, she bought booze smuggled in from Canada, hid it in the walls and resold it to boarders. “A lot of people made a lot of money that way,” Tommy Semprebon says. His family eventually made its fortune with Calmont Beverage Company.

The Stone Sculpture Legacy Program pieces aren’t the first Barre sculptures Charles Semprebon has supported. Before he died, he donated $140,000 to restore the base of C. Paul Jennewein’s “Youth Triumphant,” which many locals know simply as “the naked guy.”

Jennewein designed the 50-ton sculpture in 1921, when he won a national competition to commemorate the young soldiers who fought in World War I. The young artist stripped off the soldier’s uniform in an effort to show his vulnerability. “Sometimes important sculptures just kind of sit and remain unrepaired and almost forgotten,” says Higby. Thanks to Semprebon, the naked guy has been sitting a bit taller since the restoration last year.

When Higby got a look at Ritchie’s piece nearing completion last week, “I instantly put my hand over my heart,” she says. “Stone is such a beautiful, long-lasting material. It’s a way of creating something spectacular that shows the current flavor of an area. It shows the values of a community.”