In a Year of Change, Lawmakers Ponder: Is It Time to Retire? | Politics | Seven Days | Vermont's Independent Voice

In a Year of Change, Lawmakers Ponder: Is It Time to Retire? 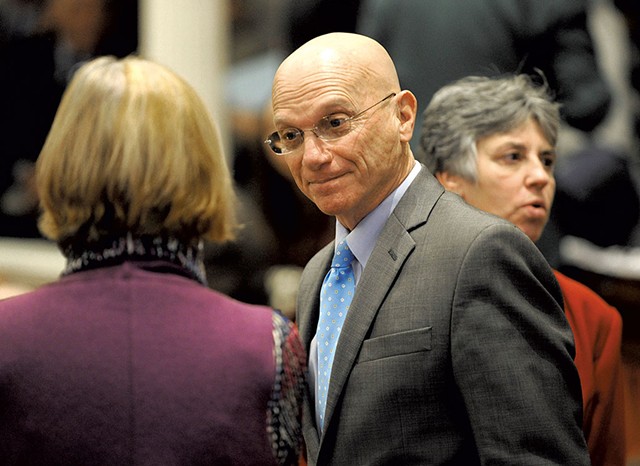 Rep. David Deen (D-West-minster) thought he'd decided that this would be his last year in the legislature. The 71-year-old has been coming to the Statehouse every winter for 28 years.

Deen, an avid angler, has a bucket list of fishing spots best visited during the legislative session: Belize, the Florida Keys, the Columbia River.

But when the veteran committee chair learned about the looming retirements of other key figures at the Statehouse, he changed his mind. He will run for reelection this fall.

"I think I can offer some institutional memory," he said.

Rep. Tony Klein (D-East Montpelier), who chairs the House Natural Resources and Energy Committee, made a different decision. After 14 years in the legislature, the 69-year-old retired public relations executive said he knew it was time to move on.

"Being dedicated to the Statehouse January to May was getting a little tiresome," Klein said.

But that doesn't make leaving any easier, Klein said, turning teary-eyed as he talked about his looming departure. He's been part of some historic moments under the golden dome, citing in particular his 2009 vote in favor of same-sex marriage. Even more satisfying than voting, he said, was performing basic constituent service, such as assisting a victim of flooding after Tropical Storm Irene.

"I was able to solve their problem," he said.

Deen and Klein aren't alone. With just five weeks to go before candidates must file for state elections, it's decision time for Vermont's 180 citizen legislators. Will they seek to return to Montpelier next session, or opt to move on?

For many of them, the decision is a complicated biennial calculation. Serving in the Statehouse offers a chance to be part of history, but it pays poorly, interrupts careers and forces families apart.

Every other year, a portion of the legislature turns over due to retirements and elections. In 2015, more than one in five lawmakers didn't return to the legislature.

This time around, a burst of big-name departures has created the impression that a larger-scale change may be afoot.

Next year, the four most prominent leaders in the Statehouse will have left or changed jobs. Gov. Peter Shumlin is retiring. Lt. Gov. Phil Scott is running for governor. Senate President Pro Tempore John Campbell (D-Windsor) is leaving the legislature for a gig with the state. And House Speaker Shap Smith (D-Morristown) is not seeking reelection but may run for lieutenant governor.

So far, Klein is the only departing committee chair, but plenty of other veteran lawmakers are leaving. At age 84, Rep. Betty Nuovo (D-Middlebury) is stepping down after 30 years in the House. Also exiting are Reps. Tim Jerman (D-Essex Junction), Patti Komline (R-Dorset), Ann Manwaring (D-Wilmington) and Bob Krebs (D-South Hero). Former Chittenden County senator Diane Snelling got a head start, resigning her seat three weeks ago to chair the state Natural Resources Board.

More retirements will surely become public as the May 26 filing deadline draws closer.

Turnover at the top is creating some openings. After 12 years in the House, Rep. Alison Clarkson (D-Woodstock) is planning to run for the Senate, seeking the Windsor County seat vacated by Campbell.

Watching the exodus of top leaders was a "tipping factor" in her decision, she said: "I'm kind of excited to be part of the change."

Other lawmakers are looking to make similar leaps. After 18 years in the legislature, Sen. David Zuckerman (P/D-Chittenden) is running for lieutenant governor. And after eight years in the House, Rep. Kesha Ram (D-Burlington) is doing the same.

Giving up a legislative seat is tough, most say. 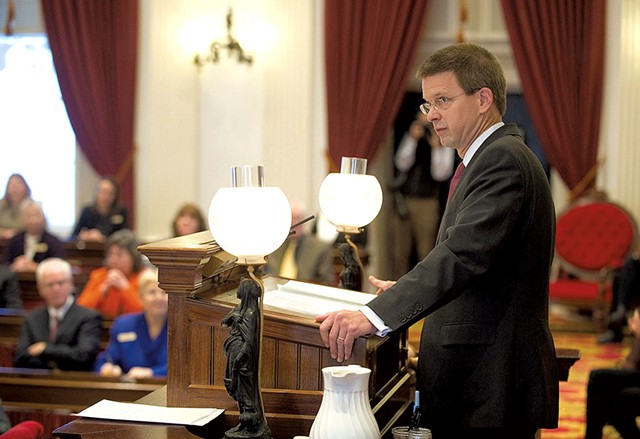 The title of representative or senator lends a feeling of importance that's hard to relinquish. Mail comes addressed to "The Honorable," and a single phone call from a legislator can sometimes solve a constituent's crisis.

Like high school students on a long class trip, lawmakers have plenty of time to bond — rooming, socializing and dining together, sometimes three meals a day. They coach each other through cancer, divorce, marriage, and the birth of children and grandchildren.

In his first year as a member of the House Education Committee, Jerman sat next to the committee assistant, Theresa Utton. Gradually, over the course of the session, he got to know her as competent, friendly and ... cute. A couple months after adjournment that year, he asked her to the Champlain Valley Fair. Now she is Theresa Utton-Jerman — and she still works in the Statehouse, as the Joint Fiscal Office staff associate.

The people at the Statehouse make it special, Jerman said, but the place itself is, too. "It's like coming to work in a museum every day," he said.

The work is making both mundane and monumental decisions that affect fellow Vermonters. Legislators hear stories that change their minds, teach them new lessons and challenge them. They cast votes that surprise them, cause them pain and, once in a while, bring them joy.

But their time in Montpelier is also filled with frustration. Committees move at a snail's pace. Egos run amok. The same unresolved issues keep returning like an annoying uncle.

Most legislators could make more money for less hassle elsewhere. Those who live far from Montpelier leave spouses, kids and pets behind for days at a time between January and May.

Rep. Donna Sweaney (D-Windsor), chair of the House Government Operations Committee, has been serving in the House for 20 years. She said last week that she doesn't know whether she'll run for reelection.

She said her frustration typically reaches its peak in the last weeks of the four-and-a-half-month session. That's when bills get stuck and legislation is shredded — often after weeks of work on the part of legislators. This year, Sweaney expected to help craft a bill creating an ethics commission, but the Senate has been slow to deliver its version.

When the gavel falls for the last time in early May, Sweaney said, she will go home, talk it over with her husband and decide whether to run for reelection. "Ask me in three weeks," she said. "Generally, at this time of year, it's like, 'I'm quitting right now.'"

Three nights a week, Sweaney dines with the same group of five or six legislators. They talk about bills and also about relatives back home. "Two of our group became grandmothers for the first time," she said.

"You live and breathe it," she said of serving in the legislature. "It's a family."

How will she know when to stop? "When I feel like I've done all that I can do," the 72-year-old said, adding, "I'm taking it to heart that I'm one of the oldest."

Every legislator has a different sense of how long is too long. Deen has logged more than a quarter century in the state capital. Others stay only a single two-year term. Age is a factor in a legislature filled with gray hair. But, typically, the decision is deeply personal.

Deen, who chairs the House Fish, Wildlife and Water Resources Committee, changed his mind about retiring this winter when he realized how few remaining legislators would be familiar with last year's Lake Champlain cleanup law.

Calling that legislation a highlight of his 28-year career, Deen said he fears a new governor might try to reinterpret the new water-quality rules. "I want to see it through," he said.

On the flip side, a dozen years in the House felt like enough to 55-year-old Komline. She announced last week that she won't seek reelection. "You feel like it's time for fresh ideas," she said.

Letting go may be easier for her, Komline said, because she plans to move to Montpelier to work on legislation in some other capacity. "I don't have any specific plans," she said. "This is where my expertise is, but to look into that while the legislature is in session would be inappropriate."

Komline looked back on her legislative career with reverence. "Most of all, you learn about yourself," she said, choking up. "You may have thought you had opinions about things, but you change your mind."

Listening to a constituent talk about physician-assisted death prompted Komline to switch from opposing to supporting the 2013 end-of-life law, she said.

Like Klein, Komline said the 2009 vote to legalize same-sex marriage stands out. As House Republican leader at the time, she opposed most of her caucus in voting for it. "It was a huge privilege," she said. "After having my kids, I would say that's the thing I was most proud of."

Every legislator finds his or her own way to be part of Statehouse history. Krebs, a 68-year-old retired engineer, quietly immersed himself in the details of water-quality legislation. Deen, his committee chair, said he'll miss Krebs' expertise.

After seven years in the House, Krebs said he wants to leave before he gets too comfortable. "You don't want to get too full of yourself," he said.

As if to remind him that any legislator is replaceable, three Democratic candidates have already lined up to seek his seat. The interest means that his district-mate, Rep. Mitzi Johnson (D-South Hero), faces a primary race for the first time in her 14 years in the legislature.

At the Statehouse, Johnson is the powerful chair of the House Appropriations Committee and a contender to become the next House speaker, but back home she'll have to compete for the right to return. "Every year, I don't take it for granted," Johnson said.

It's been 48 for Sen. Bill Doyle (R-Washington), 90, who has spent more than half his life in the Senate. "I'm definitely running," he said. "The time to retire is when I can't make a contribution."

Doyle needs a wheelchair to get around. He has been known to fall asleep in committee and in his chair on the Senate floor. In February, he forced his colleagues to redo a vote after changing his mind about an amendment to a bill mandating paid sick leave. He told WCAX-TV that he misunderstood the initial amendment.

Doyle, who still works as a political science professor at Johnson State College, said he remains energized by such priorities as increasing state college funding, which may happen this year for the first time in a while. "I have the background to help," he said.

He's still engaged with the public, too. As he spoke in the Statehouse cafeteria Friday, a constituent approached and thanked him for his support of Barre youth football. Another sat next to him and lobbied for support of rural internet access.

Similarly, Sen. Dick Mazza (D-Grand Isle) appears to be in no hurry to leave the Statehouse, even though the departures of several close allies — Shumlin, Scott and Campbell — could diminish his influence in the building.

"I've never experienced [such turnover] before," he said after 30 years in the House and Senate. "It may change my whole future here."

"I have no desire to travel or to live in Florida," he said. "This is what I love to do."