In a Vermont Book of Poetry, American and Japanese Cultures Meld 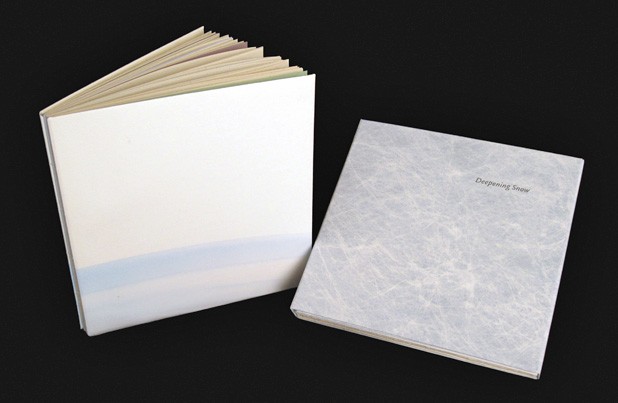 “A bridge of shirts / built between trees / torsos budding.” So reads a modern Japanese haiku about spring in Vermont, written by Montpelier poet Michiko Oishi and translated in collaboration with Burlington poet Judith Chalmer. The poem appears in the women’s new collection, Deepening Snow, a book printed in both Japanese and English that does its own kind of bridging between two vastly different languages and cultures.

“American culture is really the opposite of Japanese culture,” observes Oishi, a Tokyo native who moved to the U.S. with her American husband 18 years ago. “They couldn’t be more different.” While her adopted culture values directness and self-assertion, her native one esteems indirectness, suggestion, empathy — qualities that define the two forms of poetry Oishi explores in Deepening Snow: haiku and the much older form of tanka.

Oishi is used to explaining the differences. She teaches Japanese language and culture as an adjunct at Champlain College in Burlington, and introduces schoolchildren around Vermont to Japanese cultural traditions as the University of Vermont Asian Studies Outreach Program’s field services coordinator.

As it happens, many of Oishi’s poems originated in a liminal space that knows no cultural gaps: the subject line of an email, which allows for enough characters to fit either a haiku or a tanka. Oishi says she composed these poems as missives to her parents back in Japan while caring for her two children (now 17 and 19) during their first few years, “when you have hardly any time to yourself.”

But even with the extra syllables of tanka — which uses a 5-7-5-7-7 format as compared to haiku’s 5-7-5 — gaps remain between what a Japanese reader and an American one will grasp from a line of Japanese poetry. Seasonal references that constitute the backbone of these ancient forms of poetry instantly evoke specific emotions for Japanese readers because of their long history of use. (Haiku dates back to the 17th century, tanka to the seventh.) For Americans, not so much. And certain images of nature in Japanese culture make Americans think of the wrong season: Falling pine needles, for instance, mean summer to a Japanese native but evoke autumn in Americans’ minds, says Oishi.

That’s where her collaboration with Chalmer, who is also a poet, came into play. The two have met once a month to hash out cotranslations of Oishi’s poetry since 1999, when Oishi participated in a writing project Chalmer led to gather Vermont immigrants’ stories. The project culminated in the performance of a dance/narrative entitled “Clearing Customs,” during which Oishi read one of her haikus. After that, says Chalmer — now the executive director of VSA Vermont, a nonprofit devoted to making arts accessible to those with disabilities — the two recognized their “common love of poetry and language.” They began meeting “with no goal in mind other than to enjoy the process of exploring the nuances of language and culture,” Chalmer adds.

Eventually, the women’s conversations led to the publication of their first collaborative effort, Red Fish Alphabet, in 2008. Unbeknownst to them, the book caught the attention of Andrew Miller-Brown, a 2004 creative-writing graduate of Johnson State College who makes fine-press books, both at Janus Press — artist Claire Van Vliet’s press in Newark, Vt. — and at his own Plowboy Press in East Burke.

“I sent them a letter,” Miller-Brown recalls, asking if he could issue their next collection. The letterpress printer, who grew up on a dairy farm in Caledonia County, says he likes “to work with writing that’s not been published before.” The pair were “so surprised and happy,” says Oishi, and that agreed to submit 100 poems, of which Miller-Brown chose 51. The result: 100 signed and numbered, square-format, limited-edition letterpress copies of Deepening Snow, at $150 each. Flawlessly edited and executed, the collector’s item uses handmade and hand-bound paper. Miller-Brown acrylic washed the cover with an abstract image of a bluish snowdrift, and housed the whole in a removable, embossed folder.

Fortunately for those who don’t collect, or can’t afford, letterpress books, Miller-Brown is also issuing a far less expensive trade edition on demand using the Espresso Book Machine at Boxcar and Caboose Bookshop in St. Johnsbury. The square paperback’s front cover bears a photo of snow-laden lilac branches taken by Miller-Brown’s mother. The title and author information is relegated to a corner of the back cover, as if to emphasize the Japanese disinclination to draw attention to oneself.

Despite her 18 years in the U.S. and her authorship of the poems, Oishi betrays a similar sentiment when she expresses discomfort at being interviewed before, and apart from, Chalmer. For her part, Chalmer acknowledges Oishi’s lasting influence on her own work. “The translation process with Michiko has greatly affected my poems: They’re far more imagistic than they used to be,” she says. “My poetry has been far more focused on joy.”

Speaking of State Of The Arts, creative Writing