In a Shared South End Studio, Mother and Daughter Painters Influence Each Other 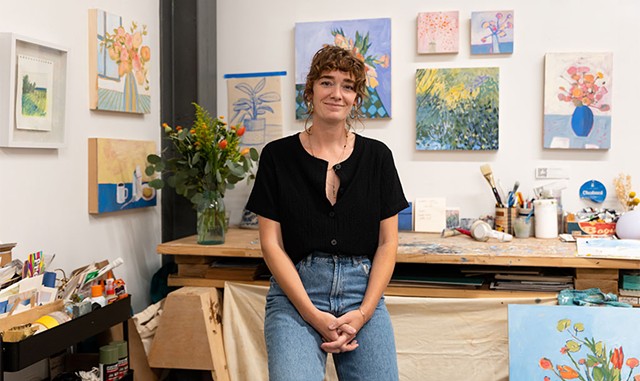 Charlotte Dworshak remembers a common occurrence in her childhood: As her mother drove her to school, she would ask, "What color is the lake today?" Dworshak, along with her two siblings, came to realize that the answer wasn't necessarily "blue." Some 25 years later, that early lesson in really looking serves Dworshak well. To her surprise, she's become an avid painter. Like her mom.

Mom is Katharine Montstream, a highly successful Vermont artist whose paintings of landscapes and florals are also reproduced in popular greeting cards. She remembers those kiddie lessons in the car. "We walk through the world, and we assume what color things are," Montstream says. "It was more about teaching them to be observant of nature, not just art."

Dworshak notes that growing up surrounded by art was more influential than she realized at the time. She gives equal props to her dad, Alan Dworshak, for running the Montstream enterprise — including a prominent gallery in downtown Burlington. "He's really good at selling art," Charlotte Dworshak says. "It's hard to sell your own work."

The confluence of artistic and business acumen in the same household is rare. Painting alongside a parent might be, too. Yet these days, Dworshak is frequently working away in the Soda Plant space she shares with her mother. The fast-motion videos she posts on Instagram underscore the idea that Dworshak is racing to finish another piece — or six. Though amusing, the videos symbolize her devotion to mastering the craft.

"I want to be an incredible artist in 15 to 20 years, so I'm just taking the steps to get there," she says. "You learn technique by making as much as you can. You learn from every painting." 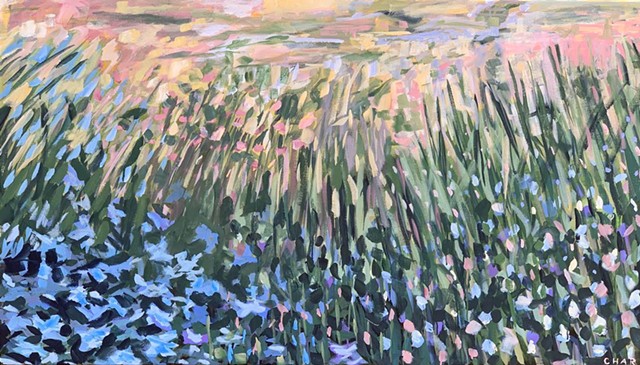 Dworshak initially had no interest in joining the family business. She left Vermont to attend the University of Colorado Boulder, where she majored in English literature, and then spent several years in Los Angeles. (It's another parallel with Montstream, who also went to college in Colorado and lived on the West Coast before moving to Vermont.) "I worked nights in a restaurant and by day would walk around [the city]," Dworshak says.

Then, seemingly out of nowhere, she recalls, "For the first time I had an urge to make things for my home."

She started by making simple block prints of minimalist landscapes and found she enjoyed experimenting with color. Then her prints began to reflect a favorite family vacation spot back east: Martha's Vineyard. To her amazement, "People wanted to buy them!" she says. "And that was how it began."

Dworshak, now 31, returned to her hometown in 2017. "I was excited to come back — I'd been away eight years — and experience Burlington as an adult," she says. Painting in the studio with Montstream, her work has quickly evolved: "I take hard-left turns every other week," Dworshak describes. Her landscapes now involve more depth and detail; her floral still lifes have a pleasing, Henri Matisse-like coherence.

"I've always loved still lifes and never thought I was good enough to do them," she says. "Then I did one and thought, Holy shit! I realized I had a sense of color."

While Montstream uses oil and watercolor and works on multiple paintings at once, Dworshak favors fast-drying acrylic and turning out as many pieces as possible, one after another. Despite their different approaches, Dworshak acknowledges that her mother "is hugely inspirational and helpful. I still learn a lot from her — I've probably watched her make thousands of paintings." 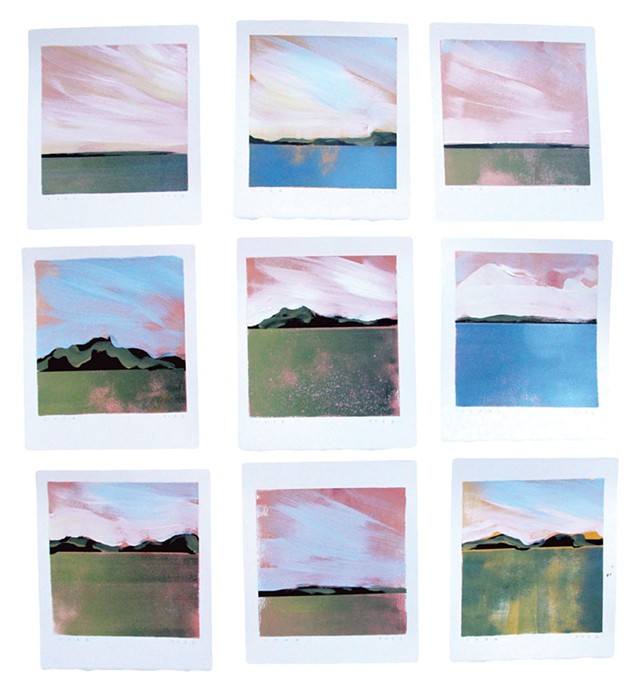 In turn, Montstream appreciates her daughter's observations in the studio: "She's really good at helping me critique through things I might not be so certain of," she says. "Charlotte has an incredible eye for seeing spatial relationships and color. If you're not sure something's working, it's really helpful to have honest feedback."

Dworshak also acknowledges the support of her longtime friend Patricia Trafton, whom she's known since kindergarten. Trafton owns Soapbox Arts, a gallery right next door in the Soda Plant. "I learn a lot from Patricia," Dworshak says — in particular about the business of selling art.

Already a self-taught photographer, Dworshak has been taking classes — in painting and ceramics — at the Shelburne Craft School. She also occasionally leads some paint-and-sip sessions herself. "I'm good at teaching those because I've only been [painting] for two years," Dworshak says. She believes the participants take encouragement from her just-do-it attitude. "People always leave surprised and happy," she reports.

Dworshak admits to feeling a bit of "impostor syndrome," but she's grateful about the turn her life has taken toward art. "I learned from my mother to see beauty and magic all around you," she says. "I feel so lucky to be able to do this."