In a Burlington Club, the Other Kind of Fish Fans Mingle 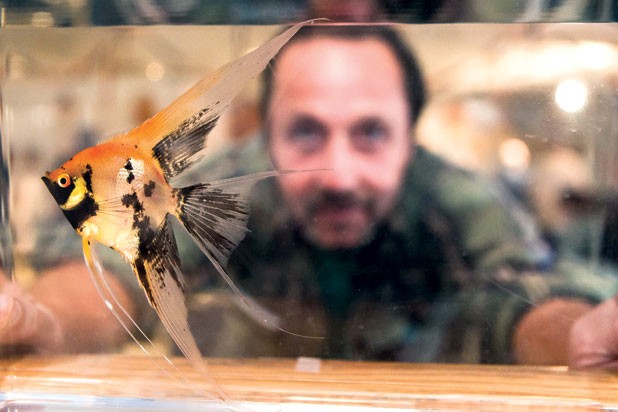 When the Tropical Fish Club of Burlington held its “less than annual” auction on a recent Sunday, Brian Scott cleaned up in every sense of the phrase. In the auction, he scored fish and plants left and right. When they called the door prize, Scott won more than $100. And around his seat at the back of the Burlington Veterans of Foreign Wars hall, he found himself mopping up water that had seeped out of one of his fish-filled plastic bags.

Scott corrected me when I suggested he had acquired a lot of stuff. He was trying to do the opposite. “My wife will kill me if I come back with more than I brought!” exclaimed Scott, whose arms are lined with tattoos and whose beard and black leather cap could qualify him to play with ZZ Top. He had lugged several multigallon fish tanks up from Benson that day, hoping to unload them on his fellow auction-goers.

With about 45 current members, the TFCB has been uniting freshwater fish fans for almost a quarter century. Judging by the scene in the VFW, it’s a small but spirited society. Some 40 people attended the event, which was emceed by Doug Patac and featured everything from fish to filters to cartoonish figurines of nude females — for aquariums, of course. Around the meeting room, several long tables were loaded with fish and plants in clear plastic bags of various sizes. While local vendors donated some of the auction items, most were fish bred by the hobbyists themselves.

It’s an odd experience to walk from a freezing November morning into a tropical fish auction. A sign at the front of the VFW ironically commanded “No Pets.” A seagull serendipitously flew overhead as I entered. Inside, the spirit was convivial. Some attendees were eating chili, others drinking beer and writing down the numbers of items on which they’d placed bids. The VFW walls bore a mashup of Halloween and Thanksgiving decorations.

Patac, a teacher from Bennington, introduced each auction item with a pitch. “These are lemon-yellow African cichlids. These are just gorgeous. You get saltwater colors with a freshwater fish,” he began, then rattled off the bids on that offering with the flourish of an experienced auctioneer. “Bidding starts at $3. $3 looking? $3 looking? OK, $4! $4 looking? $4 looking? Are you all done? Sold!”

Although a few hot commodities climbed into the $50 range, including a 50-gallon tank, the process never seemed cutthroat, with most winning bids less than $10. The individuals placing them included members of the TFCB, avid collectors from as far away as Connecticut, Massachusetts and Montréal, and a 12-year-old girl whose father had dropped her off with $45.

The auction functions as the main fundraiser for the club, which David and Janine Banks founded 24 years ago as a way to build interest in the hobby. (They’re planning an unusually large auction next year to celebrate TFCB’s 25th anniversary.) Living in Hinesburg at the time, the couple once stored as many as 45 tanks in their garage. Since moving to North Hero, Janine Banks said, they’ve downsized to a third of that number.

Their favorite fish are cichlids from the African lakes of Malawi and Tanganyika. So fond are the Bankses of those lakes that they named their two cats after them. (Fortunately, the felines haven’t inherited an appetite for their namesakes’ fauna.)

The TFCB invites experts from across the region and country to speak about fish and aquarium maintenance at its monthly meetings. The idea, Banks said, is to help people learn how to strengthen their collections. One of the earliest lessons for new collectors is that fish will eat almost anything that fits in their mouths.

More advanced hobbyists learn how to breed. “When you have guppies and they have babies, what do you do? Do you kill them? No, you get ’em a new tank. Some fish have babies who are a half inch long. So it’s a lot of education,” explained Banks, the club’s treasurer. She has also served as chairperson of the Northeast Council of Aquarium Societies, an umbrella organization for tropical fish groups across the region. Her husband is president of the TFCB.

For auction attendee Olivia Strong, the big question is how to get her cichlids (a diverse family of fish that’s popular in Vermont) not to pulverize every plant she places in their small sea. “Ideally, I’d like to have a planted tank, but cichlids tear up plants. Those little leafy, frilly things? They don’t last,” she lamented. “You come home from work and there are little pieces floating on top.”

Strong, a Jericho resident, has been collecting fish for three years. She got involved with the TFCB after attending last year’s auction, she said over a cup of chili.

More experienced members suggested plants that might deter her fish’s mandibles. Although Strong hadn’t planned to get anything at the auction, her eyes had turned to an Anubias plant that might do the trick.

While the auction occupied the front of the VFW hall, the back was given over to the “bowl show” — a competition in which participants could enter their fish for a chance at prizes of up to $20. Strong had brought her cobalt blue African cichlid, which looked like a whale compared with the other fish in the contest. Its smallest competitor was a chili rasbora, the color of a goldfish and barely larger than a mosquito.

Judging was open to anyone, so as the bidding continued, auction-goers periodically got up to scan the selection and cast ballots. Ultimately, the winner was a koi angelfish, a ghost-white specimen with translucent fins and orange-and-black markings across its face and body.

Though the TFCB is accessible to beginners, the more experienced collectors carried themselves with a certain swagger, discussing in minute and authoritative detail the merits of stocking shrimp versus paramecium, or the stuff they’d managed to acquire through scrupulous surfing of Craigslist.

Local aquarium expertise isn’t limited to the members of the TFCB. As it happens, the world’s most widely circulated magazines about fresh and saltwater aquariums — Amazonas and Coral, respectively — are published in Shelburne by Reef to Rainforest Media. Though both bimonthly publications are actually translations of German magazines, editor and publisher James Lawrence explained in a later phone call that the English-language versions produce original content and enjoy a wider circulation.

“We’re kind of tucked away in Shelburne here,” Lawrence said. The former editor and publisher of EatingWell, he has moved on to books and magazines for the fish-collecting set. Although Lawrence believes enthusiasm for tropical fish is high in Vermont, his publications sell best on the coasts.

“[Reef to Rainforest has] a very strong environmental stance, and we hammer away at climate change. That tends to drive away the right-wingers, so maybe we’re self-selecting for blue states,” Lawrence explained of his magazines’ audience, citing California as their largest market.

Although he didn’t attend the TFCB auction, Lawrence donated several books and magazines. The auction-goers who paid $2 for the most recent issues of Amazonas and Coral got great deals, since they retail at $8.

While the TFCB does raise conservation issues at its meetings, the club’s primary mission is promoting responsible collecting, Janine Banks explained. A collector, she said, should never release tropical fish into the wild. Almost 2000 miles north of the nearest tropics, another important principle for Vermont collectors is storing their fish in insulated environments. That meant people would be stowing their catches in Styrofoam coolers for the car ride home.

Unlike breeders of certain furry pets, patient hobbyists don’t need much time or money to end up with striking specimens. Winning second place at the bowl show was Lam Phan, who entered a red-tailed shark. Not nearly as fearsome as its moniker would suggest, the shark is a black, whiskered fish with a bright-orange tail. Phan, who took home $15 for the honor, isn’t some grizzled veteran; he’s only been at the hobby for three years.

The beauty of fish collecting, suggested Richard Maxwell, an early club member who now sits on TFCB’s board of directors, is that it’s not the Westminster Kennel Club.

“Fish aren’t some status thing, like horses or German shepherds,” the veteran collector said. “No, fish people are pretty jolly.”