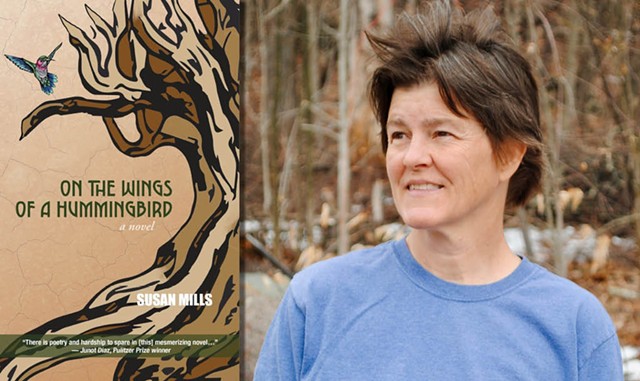 Fifteen-year-old soccer star Petra is just awakening to the realities of the world beyond her tiny village in the hills of Guatemala. The Ladino teen of mixed Spanish and Mayan descent dreams of continuing her schooling in Guatemala City and becoming a physician who can heal her impoverished friends and neighbors.

But, like the volcano that looms ominously over her village, a constant threat of gang violence casts its shadow on Petra's daily life. She becomes the target of a local gang after her mother flees to the U.S. to escape her abusive husband, leaving Petra to live with her older brother, Carlos, and their elderly grandparents. The teen suspects that the gang's leader, her childhood friend Emilio, had a hand in her best friend's abduction and murder — and that she will become his next victim.

Author Susan Mills didn't have to conjure up imaginary scenarios for the plot of her first novel, On the Wings of a Hummingbird. During the 20 years she spent as a U.S. immigration lawyer, Mills worked with thousands of Central American migrants, including many Guatemalan teens, who fled their home countries to escape gang violence and sexual and domestic abuse.

"I had horrific stories coming out of my ears all the time, sometimes several times a day," said Mills, who retired from her law practice five years ago to write the book. (She still does pro bono work for the Community Asylum Seekers Project in Brattleboro.)

The 62-year-old Baltimore native lived in Rhode Island for four decades before relocating to southern Vermont several years ago. In her early twenties, Mills traveled to Nicaragua, El Salvador and Guatemala, where she got involved in the political sanctuary movement. There she learned to speak Spanish, met a Salvadoran with whom she would have a son and "moved politically from being scornful of the law to wanting to become a lawyer," she said.

"The lines are often blurry. Victims can be perpetrators, and perpetrators can be victims." Susan Mills tweet this

Mills, whose book bears a blurb from controversial Pulitzer Prize winner Junot Díaz, doesn't try to duck that charge or rationalize her intentions.

"For most of my adult life I have lived, moved, and worked among Central Americans," she writes in an author's note that opens the book. "I have been immersed in the language, the culture, the history, politics, and literature of Latin Americans, all of which gives me a unique perspective to write this story. It does not, of course, change my identity."

Mills spoke to Seven Days about her novel, her work and the teen immigrants who inspired Petra's story.

SEVEN DAYS: I assume that the violence that Petra and her family experience at the hands of Emilio and his gang represents the kind of stories you heard regularly?

SUSAN MILLS: Absolutely. I did a lot of cases with adolescent kids from Central America who were unaccompanied minors when they came to the U.S. They may have had family here, and many of them were being recruited by gangs. It's a huge issue for people in Central America right now.

SD: You chose to portray Emilio, the gang leader, as a victim, too. Why?

SM: When I grew up in Baltimore, my mother, then later my brother, were very active politically, advocating for prisoners both before and after they were in prison. So I grew up with a very clear sense of the racism that leads people to commit crimes and then end up in jail. Both parties are often victims. There's a lot of ambiguity in a place like Guatemala, where there's decades — centuries — of political violence. So the lines are often blurry. Victims can be perpetrators, and perpetrators can be victims.

SD: As a white woman writing from the perspective of an Indigenous teen, did you have any trepidations about publishing this book, given the controversy that surrounded American Dirt?

SM: Well, that came out when I was about three-quarters of the way through my book. Certainly, I was like, Whoa! I definitely need to think about this. There are very real issues about white authors getting privilege in the publishing world over Black, Latino and immigrant authors. That continues, and, understandably, there's anger and resentment about it.

But I think the solution is not so much to discredit or cut out the white voices as to elevate and give an equal voice to nonwhite authors. In the end, it seems to me that readers should know who an author is, and they don't always get the chance to do that. It's essential that people read my book knowing that I'm not a Guatemalan Mayan immigrant. But I think there's something of value that I have to contribute, too, given my own experience.

SD: Some critics say that no white person, no matter how well-informed, should write from the perspective of an Indigenous or nonwhite person. Your thoughts?

SM: The obvious extension of that is, male writers shouldn't write about women — or, God forbid, a pregnant woman. We all have lots of characters in our books, and the main character is likely to be somebody different from ourselves. I think it's a question of doing it intelligently and respectfully and trying to equalize the playing field, so that nonwhite authors get at least as much of a chance to get published.

SD: Your story draws a lot from Mayan mythology, including the character of Alocinia, the hummingbird. Did you consult experts on Mayan culture to get those stories right?

SM: I read the Mayan bible, called Popol Vuh, and a lot of Mayan mythology. I made a deliberate decision to have Petra not be fully Mayan but have Mayan ancestry, with a good portion of her heritage lost two generations ago. The Mayan mythology is very much a part of Guatemalan culture, so it felt very real to me for Petra to blend Mayan mythology and Catholicism. I wanted to explore the blurriness between belonging and being in limbo between two worlds, and the blurriness of good and evil that comes from suffering persecution in a persecuted place. It's also where Petra is most able to confront the trauma that's happened to her.

SD: There's one element of the story not mentioned on the book jacket: teen sexual identity and the romantic love between women. Is sexual identity another reason why some of your clients fled their home countries?

SM: Oh, absolutely. There were two major types of asylum cases that came out of Guatemala: gang cases and domestic and sexual violence cases. I can't say that I did a lot of cases with people who were gay or lesbian or trans, but there were a few.

To me, a lot of what this book is about is identity in the old-fashioned sense: Who am I, and how do I figure out my purpose in this world and get out of this community that offers limited choices for me? Petra is looking at the different women in her world and trying to figure out where she fits in — and not finding a lot of room there.

SD: Did you have one particular client in mind who inspired this book?

SM: At first there was, then later it became a conglomeration of lots of people. But a very specific immigration client inspired me to think about Petra. She was very unusual. She had short hair, which was fairly uncommon for women from Guatemala. Like Petra, she was also 15 and had a very fiery spirit. Her mother was in the United States, and the girl had been living with her grandparents. She was also really into soccer, like Petra. She just decided to leave Guatemala without telling anybody. And she did that entire trip to the United States by herself. She came across the border and got in touch with her mother, and they came to live together.

SD: You chose not to recount much of Petra's journey north. Why not?

SM: That was a very specific choice. I feel like that's been done, over and over. My focus was really on Petra's inner journey and who she was going to become, and that physical journey felt too external, and I didn't want to get lost in the trip.

SD: I would imagine that the timing of this book is opportune, given where our country is today on the immigration debate.

SM: Unfortunately, you could have said that at any time in the last 20 years. I started the book in 2018, and people were like, "What a great time for this to come out." But, unfortunately, nothing moves politically on immigration issues.

Books On the Wings of a Hummingbird Susan Mills immigration