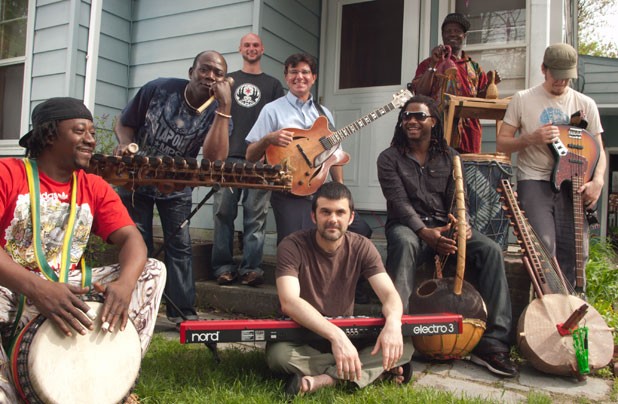 Chittenden County has become increasingly diverse over the past 15 years. These days, at least in Burlington, one can see African girls with colorful head scarves walking to school, Vietnamese restaurants in nearly every neighborhood and “new Americans” working for local businesses such as City Market. Culinary and sartorial style are often the clearest evidence that northwestern Vermont is the state’s most multicultural region. However, its music scene has remained surprisingly, well, white bread.

Seny Daffe, an African immigrant born in Guinea, is starting to change that. He has performed with Barika, the popular West African-influenced group led by n’goni player Craig Myers, and sung with jazz-fusion explorers Japhy Ryder. And Daffe is part of Jeh Kulu Dance and Drum Theater, a traditional West African performance and educational ensemble that performs all over New England.

Now he has banded together with a group of his fellow Guineans to explore West African music as Seny Daffe & Wontanara.

“I used to sing with Japhy Ryder and Toubab Krewe and different bands,” says Daffe during a recent hang at the band’s practice space in Burlington’s New North End. “And when I get off the stage, people tell me, ‘Oh, you good singer, you can make your own band.’”

Daffe took the encouragement to heart. Seny Daffe & Wontanara feature fellow Jeh Kulu members Ismael Bangoura and Sidiki Sylla as well as newcomer to Vermont and Guinea native Lansana Camara. All four have musical experience that goes back to their childhoods and is rooted in traditional West African drum and dance. And each has had a long professional career in dance and music, touring professionally in Africa, Europe, the U.S. and elsewhere.

But the band has some American-born members, as well. Rounding out the lineup is a rhythm section familiar to followers of the Burlington music scene: bassist Pat Ormiston and drummer Jason Thime, both of Japhy Ryder.

The polycultural group has been together just a few months but has already played at Parima and Nectar’s in Burlington. It’s also added new talent — local guitarist Jerome Monachino and keyboardist Andric Severance — upon the request of Camara, who plays the African string instruments kora and balafon and wanted to hear some guitar and keys in the mix.

Clearly, the band is off to a promising start onstage, if still finding its legs in the communication department. No, it’s not the usual conflicts over creative direction or ego. Sometimes the Guineans just forget to speak English.

“I don’t understand half of what they’re saying half the time,” says Thime, to uproarious laughter from everyone in the room. “They’re speaking in another language, but it’s cool. It’s been a lot of fun.”

Daffe notes that sometimes when the Guineans lapse into Soussou, one of their native languages, they start laughing, and even though Thime hasn’t a clue what they’re saying, he laughs, too. But music shines through as the universal language.

“For any of the cues we can’t understand verbally, they play it for us,” says Ormiston. “When you play it, it doesn’t matter what language you speak. You still all hear it the same.”

That message is central to Wontanara. According to Daffe, the band’s name means “we are all together.”

“Our culture ... African culture ... we share wherever we go,” says percussionist Bangoura, who has been a key force in Jeh Kulu since 1997. “And it’s why [Jeh Kulu does] the residency with the little kids,” he says, referring to weeklong programs the band presents at schools around New England. “We go to one school the whole week, and we do the show. The parents come. Everybody sees the African culture. That’s what we do our whole life.”

Camara, Bangoura and Sylla all agree when Daffe says music is “like talking” for them. He points out that though Wontanara practice on a regular basis, the Guineans don’t practice for their Jeh Kulu gigs together. Instead, they just “talk” to each other during the show, using their instruments. They’ve all played traditional music since they were kids.

To make a point, Daffe explains how the forest people of Guinea once used a krin, a small wooden percussion instrument, to communicate.

He picks up a pair of sticks and deftly plays a quick series of rolls on the hollow wooden krin. They mimic the traditional ring of a telephone so accurately that everyone breaks into laughter in acknowledgment.

Though Daffe says he never planned to create a band that was half white American and half black African, it exemplifies what he sees as Wontanara’s mission.

“The four of us [Guineans], we can do a song ... but together [with the Americans] is stronger,” he says. “To mix it ... is really nice to see on the stage. So dance and drum bring everybody together. We are so happy to have them ... We are all together.