I'm Not Sure I Can Handle My Partner Calling Me 'Mommy' | Ask the Rev. | Seven Days | Vermont's Independent Voice

I'm Not Sure I Can Handle My Partner Calling Me 'Mommy' 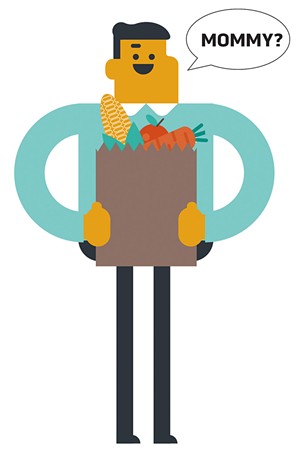 I met a guy at the grocery store last month. The line at the register was long, and we just hit it off while waiting. The only thing is, he's older and more experienced than I am. I'm 20, and he is 32.

We've been seeing each other for about three weeks now, and at this point it's the most involved I've ever been. I'm in college, so it's usually one-night stands for me. I really like him, and the sex has been great.

However, last night he was about to finish when he grabbed my hand, put my finger in his mouth and, I think, gasped, "Yes, Mommy."

I've never been involved in any sexual relationship that isn't straightforward. Is this normal? What can I do to help fulfill whatever fantasies he seems to be having? I want to make him happy, but I'm not sure if I can stomach the thought of being called "Mommy" while I'm being fucked.

Dang. All I ever pick up in the grocery store is food!

As far as age goes, if everybody is legal, it doesn't make too much difference to me unless we're talking about produce or wine.

As for this specific encounter, are you sure he said "Mommy" and not "Mami"? The two words sound similar but have different meanings. As we all know, "mommy" is a childish, short version of the English word "mother." "Mami" is Spanish slang for "mother," but it's often used in reference to a sexy woman.

It also could have been a one-time thing or a slip of the lip. You could just wait to see if it comes up again, but you might as well ask him about it. If he's into submission, it's kinda great that he's letting his freak flag unfurl this early in the relationship. But nothing is OK if it makes you feel uncomfortable.

Other than this, it sounds like you two are having a good time, so keep that ball rolling with some honest, open communication. That will make it much easier for both of you to fulfill each other's fantasies.