I'm Afraid to Tell My Husband About My Santa Fantasy 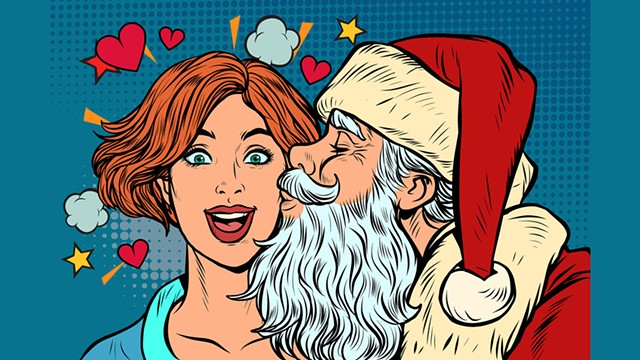 I've got the hots for Santa Claus, and I don't understand why. I really want to get it on with my husband while he wears a Santa suit, but I don't want to tell him because I'm afraid he'll think I'm messed up.

So much about Santa is ripe with innuendo. He's got a sack full of goodies; he comes down your chimney at night; he knows if you've been naughty. You sit on his lap and tell him what you want, for goodness' sake. He's also a father figure, a man in a uniform and the ultimate sugar daddy. It's no wonder he gets your Yule log fired up.

And you're not alone. A website called Be Naughty ran a survey that found 20 percent of women had Santa fantasies. It also found that one in 16 men had dressed up as Santa in the bedroom at least once.

Fun fact: St. Nicholas was a bishop in Turkey in the fourth century AD and is considered the patron saint of sex workers. He gave three sisters dowries so they were able to get married and avoid going into the "oldest profession."

I say make your Christmas wish come true. Get your husband the Santa suit of your dreams and have at it. But if you have young children — for the love of God — do it when there's no chance of them being around. Walking in on your parents having sex can be traumatic, but walking in on one of them banging Santa is enough to mess a kid up for life.