ILLu, 'B Side Instrumentals Volume XIII' 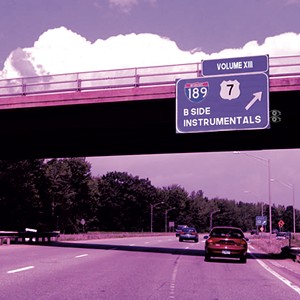 ILLu, a hip-hop producer from Burlington, has been central to the scene's explosion in recent years. He's endlessly prolific with the beats, but the young man is also a tireless networker and collaborator. Perhaps the most important connection he's forged is his partnership with fellow Queen City producer Rico James, cofounder of the standout local imprint Equal Eyes Records.

B Side Instrumentals Volume XIII, ILLu's latest release, is not the catchiest title. But that's the point. From the start, his B Side series has been a testament to both his work ethic and his evolution as an artist. While ILLu's dedication has stayed consistent, his craftsmanship has sharply improved over the years.

The opening track, "See You," serves as a prime example. It's a deceptively simple piece of work, just a vocal loop and some drums. But the producer's extensive mixing experience transforms the track into beat hypnosis. The drums absolutely thump, dominating the low end without overpowering the other elements. The main loop is dirtied up with just enough distortion to make it interesting. It's the subtle touches — quiet scratches, lurching stops, hand percussion — that flesh out the song into something special.

"See You" sets the tone for the rest of the album. And despite consisting entirely of hip-hop instrumentals, this truly is an album — the tightest, most cohesive installment of the B Side series so far.

ILLu's samples are often warped at the margins, and he takes a much more textural approach to sound than he ever did in his earlier work. He's a huge fan of vocal chops, the "chipmunk soul" sound made famous by North Carolina workhorse 9th Wonder. But ILLu's palette has grown considerably since his early days.

So has his bag of tricks. From the gently warped pitch of "Can I Live" to the dark jazz of "One Moment Please," ILLu proves to be more comfortable experimenting. In turn, his compositions are more ambitious.

Indeed, the second half of the playlist cranks things up even further. Urgent banger "Strength" hits like vintage Pete Rock, and the halting chops of "Undermine" grow a catchy, compelling beat out of a loop that sounds awkward at first. Until it's suddenly perfect.

This is the best work of ILLu's career to date — but, rest assured, he's looking for more. Despite a full plate of collaborations, not to mention the obligations of managing a busy record label, he's still eager to build new bridges. That relentless drive is a huge part of why Equal Eyes has been so successful as a platform and a posse.

So, while B Side Instrumentals Volume XIII can and should be enjoyed in its own right, this is dual-purpose art. In addition to its sonic pleasures, the album is a business card advertising ILLu as one of the most creative and impeccably solid hip-hop producers in Vermont.

B Side Instrumentals Volume XIII is available at equaleyesrecords.com.

Speaking of ILLu, B Side Instrumentals Volume XIII