If the Glove Fits... Mud season turns up a lost-and-found art project 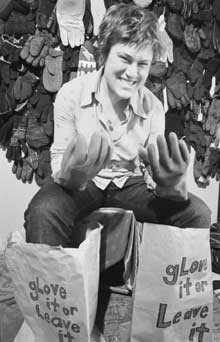 The fluctuating temperatures this winter have caused my long and narrow driveway to thaw and refreeze by turns. During the most recent melt in this meteorological nightmare, the disappearing snow and ice yielded six-inch muddy ruts leading deep into my backyard — a temporary parking lot during snowstorms. To my surprise, the early spring turned up something else: a black fleece glove — the missing mate in my favorite pair — that vanished weeks ago. It was frozen and crusted with sludge as I peeled it out of the crevasse behind my back tire.

Lost gloves and mittens, like potholes and frost heaves, are a given in wintertime Vermont. By the end of the snowy season, many of us are left cold-handed, with unmatched gloves destined for the trash or the junk drawer. Abby Manock would like to change all that. The Burlington artist and self-titled "CEO" of Glove It or Leave ItÇ she has been collecting lost gloves for more than a year, and is on a mission to reunite gloves with their missing significant others. Who knows, she may have one — or more — of yours.

Last January, Manock was living in Portland, Maine, a coastal city known for its swiftly changing temperatures — a climatological condition that she theorizes may contribute to excessive glove loss. Manock began to notice gloves and mittens on the streets and, rather than stepping over them as most of us do, she picked them up. She also started documenting her discoveries with individual "fact sheets" listing where and in what condition she found them, as well as their estimated cost.

To illustrate the "fact sheets," she made black and white sketches of the gloves — ˆ la the J. Peterman catalogue — that show the fabric, distinct markings and any other defining details, including "brand" name if it's relevant. She tags each glove in order to easily match it with its sketch and written description.

"My ultimate goal is to have someone call me and describe a missing glove that I have the pair to," is how Manock articulates the practical purpose of her art "piece." But she also intends its mission as a metaphor. "A glove is such a recognizable and interesting symbol. It's a covering. It's a second skin. You have gloves in crime scenes. You have work gloves. They all have their personalities — just like people."

As the Glove It or Leave It project progressed, Manock's friends and family got involved, sending packages of lost gloves from all over the country and noting where each was found. Manock now has a collection of some 350 gloves and mittens from as far away as Utah. The colorful array decorates the wall of her Pine Street studio in Burlington, where she returned in September after a nine-month stay in Maine. If you've found gloves or mittens yourself, she'll be happy to take them off your hands.

Manock finds an average of seven a day, stumbling across them during her marathon-training sessions or on walks to and from her job in the nordic ski department at the Ski Rack. Equipped with a backpack and plastic bag, which she uses to peel gloves off ice and out of snow, Manock is never caught unprepared to collect even the nastiest glove. "I pick them up because I can't not," she explains. "It drives my thoughts so much – the story behind each one of these gloves that was lost."

"The other day I found one that was definitely distinct," she recalls of a glove found on South Willard Street. "It had a snowflake on it and was a chenille-like material. I picked it up and kept walking, and a block later I found the other one."

Manock dries her wet findings in an empty kiddie pool for a couple of days, then adds them to the older ones on the wall. They come in all shapes and sizes — children's mittens with stripes or smiley faces, well-worn men's work gloves, stretchy, one-size-fits-all "magic gloves." She has a few complete pairs.

"My sister found this one in Maine," Manock recalls, pulling an orange rubber fishing glove secured by a thumbtack off the wall. It's stiff and still maintains the shape of its missing hand.

The majority of lost gloves belong on the right hand, according to Manock — presumably due to the dominance of right-handedness. She suspects many people drop their gloves after taking one off to do something like unlock a car door. That could explain why Manock finds many gloves around parking lots and meters and outside banks. People are more likely to drop gloves that are pulled on and off frequently and stuffed into pockets or purses, when the weather is changeable. Burlington City Hall Park turns up a ton.

Manock's optimistic — perhaps naively so — that her recovery project will be a practical success. Glove It or Leave It is actually registered as a business, so Manock says she can write off shipping charges as a tax deduction. Despite the absence of an income component in this scheme, she remains motivated, posting flyers around town and sending them to people on her modest mailing list. She's also working on a lost-and-found "kit" to place in local businesses — it would include a plastic bin for donations and a description of the company and its goals. She plans to create a Web site, www.gloveitor leaveit.com, where she'll post some of her sketches and descriptions, in hopes that people missing gloves will respond.

"There's all sorts of stuff I want to do with this," Manock enthuses. "I just need some time. T-shirts, glove donor cards, special packaging to return the gloves in, all those fun things."

But the greater purpose of her documentation is "sort of conceptual," Manock acknowledges. "It's a piece. It's not like I'm starting a business, like a restaurant. I guess that's the gray area with all art. Everybody gets cold hands in winter. Everybody needs gloves, whether they are Armani or work gloves, and everybody loses them. It's just an interesting public statement."