If a Good Show Happens in a Half-Empty Club, Does it Make a Sound? | Culture | Seven Days | Vermont's Independent Voice

If a Good Show Happens in a Half-Empty Club, Does it Make a Sound? 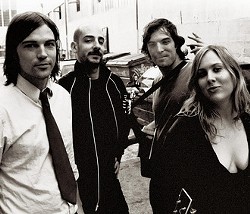 Did anyone else catch Sonya Kitchell and The Slip at Higher Ground on Wednesday night? Actually, you don't need to answer that. Because there was nobody there. That, and I can't hear you through the Internet.

Brad Barr, best known as the singer/guitarist of The Slip (not to mention his other bands — Surprise Me Mr. Davis, Super Little, probably others no one knows about), played a solo opening set. He mixed acoustic, instrumental pieces from his newly-released album The Fall Apartment with solo renditions of vocal tunes from his other projects. He also displayed an incredible skill, using an electric guitar, an array of effects, and a loop pedal to craft some really beautiful sonic textures. Unfortunately, only about 20 people were there for Brad's set, at least for the start. I truly believe that The Slip are the most underrated, overlooked band of our time, and it appears that injustice persists even when Brad's by himself. It's a real shame, because he's written some amazingly beautiful songs.

Speaking of The Slip, the entire trio appeared on stage a short time later to play as Sonya Kitchell's backing band.  By that time the crowd had swelled to about 75. In truth, my interest was piqued because of The Slip's involvement, and it was a little weird to see them as sidemen rather than the main attraction — though it was a lovely treat to hear them play "The Soft Machine" from their 2006 album Eisenhower, with Sonya on lead vocals. But I've also spent quite a bit of time these last few weeks with Sonya's new album, This Storm, and it's grown on me a lot. Her voice reminds me a lot of Grace Potter's, but her music has more of a jazzy strain to it, more like Joni Mitchell's jazz period. For this reason, The Slip's instrumental skill was a perfect match.

Sonya sang every note perfectly, and displayed some fine guitar chops as well. Though, if there's one complaint I would make about Sonya's music, it's that she sometimes falls into a somewhat cliched neo-soul/blues sound, not unlike Cat Power's recent work. Not that it's bad — it's just that sound has been done many times over. Then again, if I had a voice like hers, I might want to show it off, too.

The quartet closed the show with a blistering R&B take on Bob Dylan's "Highway 61 Revisited," with Sonya singing like Dusty Springfield and Brad Barr contributing some immense guitar work. It was a great night with a show of some fantastic talent. It's really too bad that hardly anyone was there to witness it.