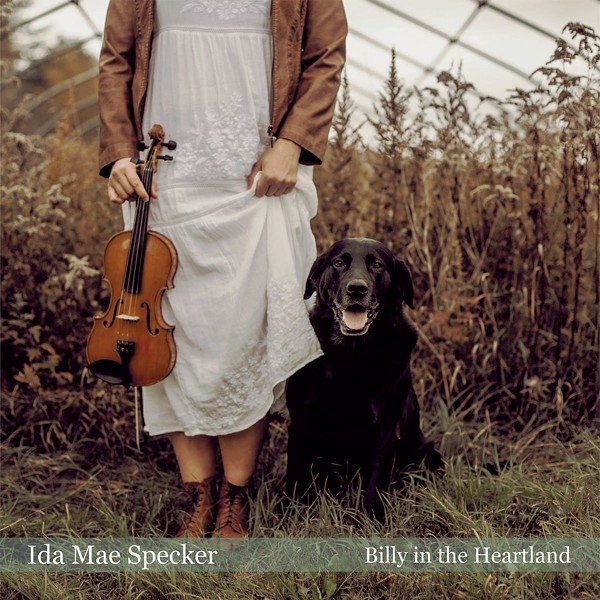 I have always wanted to be a fiddle player. I grew up in a town that would semi-regularly shut down Main Avenue, invite a bluegrass band and throw a street dance. So, in my mind, that music became permanently wedded to the rebellious, joyful feeling of occupying a space usually reserved for cars.

To me, the fiddle is like the cursed red shoes in the old Hans Christian Andersen fairy tale: In its presence, I'm physically incapable of not dancing. What would it be like to wield such power?

Ida Mae Specker, one of Vermont's fiddle powerhouses, likely knows. She comes from a family of fiddlers, including her father, John, and sister, Lila. Ida Mae Specker's latest six-song release, Billy in the Heartland, is packed with delightful work with the instrument. So it's ironic that the best showcase here of her musical smarts is when she exchanges her fiddle for an electric guitar to cover "Wagoner's Lad," a traditional folk song.

Most other versions of the tune either back it with speedy banjo or go a cappella, à la Joan Baez. Specker's brilliant decision to strum instead of fingerpick makes the century-old song feel completely new. It also demonstrates her strong vocals and ability to create something unique in a genre that's recycled the same tunes for generations. Brendon Thomas joins in with harmonica, and a mid-track canine vocal solo is a humorous touch. (Thomas also recorded, mixed and mastered the EP at Owl Sounds Recording in Cambridgeport.)

Five original songs, some cowritten with Lila Specker, fill the rest of the EP. The only one I don't care for is the title track. The narrative ballad has a long and storied history but easily turns corny; Ida Mae's attempts to pack complete sentences into the melody don't land. The lyrics do little to develop Billy into an actual character. But this is a minor quibble, because the rest of the music is solid and creative.

The very next song, "Red Dust in Texas," offers clever verses about the same kind of rambling man as Billy. Specker digs in on a powerful, guitar-fueled chorus with an outlaw country vibe that wouldn't be out of place on Tanya Tucker's comeback album.

"Break My Fall" is an upbeat, marching love song that could apply to far more relationships than just romantic ones, and Specker varies her fiddle style to suit different parts of the song. "Almost Lovers" captures the strange, disconnected feeling of meeting a person whom you know you could fall hard for, but then nothing happens.

As sophomore releases go, Billy in the Heartland is smart. While the album shows off Specker's skill with her fiddle, it also makes clear that she's worth listening to even without it.

Billy in the Heartland is available at idamaespecker.bandcamp.com and on Spotify. Specker performs with the Speckers on Saturday, February 1, at the Phelps Barn at the Grafton Inn in Grafton.