Adult amateur hockey is skating right along in Vermont 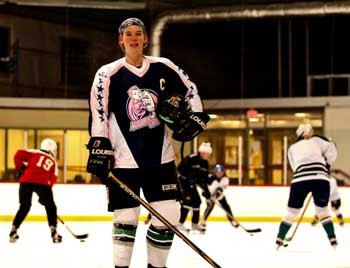 Thea Alvin is one bad Mother Pucker. That's the name of the all-women hockey team she plays with in Stowe. At 5-foot-2, the 37-year-old hockey diehard stands as tall as some players' leg pads. She took her first turn as a goalie using gear borrowed from the Stowe Youth Hockey Association. Six years later, she's the most-traveled netminder in Stowe's recreational hockey community.

Alvin became a goalie because she wanted more ice time. On Friday mornings, she was skating with the Mother Puckers. On Tuesdays, she was playing with a pickup group. She targeted a group that met on Thursdays -- one of her days off the ice. "The group was full," Alvin recalls, "but I thought if I showed up every Thursday with all my equipment, eventually they'd have to let me in." Finally, she says, "the guy in charge of the group said they needed a goalie. If I wanted to play, I should get goalie equipment."

Netminders are a hot commodity, Alvin notes. "Goalies play for free because we provide a service that everyone needs. Without goalies, there's really no game. Goalies band with each other in that we go to goalie camps together, and we take trips to Canada to buy our gear. And we're all nuts."

She should know. These days, the Stowe stonemason plays six days a week -- sometimes a couple times a day. During one particularly busy stretch, she clocked 264 games in 22 weeks, including one day when she played in eight games. "I'm known as a puck slut," she says, "but that's okay. Because I love hockey."

Visit any rink in Vermont and talk to players in local leagues and informal groups, and you'll find that in recreational hockey communities. Alvin and her ilk are the norm, not the extreme, In Burlington, people are tucking their kids in for the night, kissing their spouses goodbye, and heading out for late-night pickup hockey. They're skipping lunch for midday stick-and-puck sessions. And they could be anyone. "It's a great cross-section," says Alvin. "Architects, builders, lawyers, the guy who parks cars at the ski resort -- they're all out there playing."

Much of the local recreational hockey scene revolves around Dan McFall. An All-American collegiate hockey player at Michigan State University, McFall grew up in Buffalo, New York, where his dad worked at the local rink. When there were snow days -- and there were lots of them in Buffalo -- he would take McFall and his brother to work. "We would skate all day," he remembers.

McFall played 11 games in the NHL. "I can say I made it," he says. A highlight of his brief career was facing off against the 1985 Edmonton Oilers, one of the greatest teams ever. "I was playing defense," McFall says, "and I was looking across at Gretzky, Mark Messier, Jari Kurri, Paul Coffey, Kevin Lowe and Grant Fuhr." The puck bounced into McFall's corner and he went to retrieve it. "Kurri danced around me and passed it to Gretzky. Goal." On the bench, the assistant coach approached him. "He put his hand on my shoulder," McFall says, "and said, 'Tricky, aren't they?'"

After his playing career, McFall returned to Buffalo before moving to Burlington, where he worked as a carpenter and renovator. "There were six or seven years in there," he says, "when I skated only three times." But then he got the itch again. He started skating, and quickly decided to make it his vocation. "I wanted to do something I loved. And besides, I skate a lot better than I can swing a hammer."

McFall and Aimee Vieira founded Full Stride, a Burlington-based organization that provides instructional clinics and competitive leagues for men and women at various levels of ability. At any given time of year, 600 to 800 people are involved in different Full Stride leagues and programs. The co-ed instructional program lasts 12 weeks, with players alternating between skill nights and scrimmage nights. "It gives them the fundamentals," McFall says, "and it gets people used to playing games. And after awhile, people who put on skates for the first time are off on their own organizing teams for the leagues."

Why would perfectly sane adults want to spend their spare time in freezing-cold hockey rinks where odds are good they'll be hit with a flying puck? Maybe, suggests, Gail LeBaron, who has played mixed hockey with the guys and on a women's team for 12 years, "it's because you feel so graceful when you're playing."

Graceful? "Actually, yes," LeBaron insists. In recreational play, the rules help. Most fun leagues and pickup groups don't allow checking. "Without checking," she says, "it's a very civilized game. It's still physically intense, but it doesn't jam you and pound you like soccer or running."

But it does provide a good workout. Hockey is played in quick, short bursts of energy. People go full throttle on the ice for 40 to 60 seconds at a time, and then they rest for a minute or two. These short, explosive shifts are like an interval workout in swimming or running. "I'm a body worker," says LeBaron, manager of the massage staff at the Topnotch Resort in Stowe. "I feel that hockey is the best aerobic workout that doesn't pound your joints. It's a great cross-training sport."

"To me, the secret of good hockey is yoga," reveals local independent filmmaker Art Bell, in what is perhaps the first-ever sentence to include the words "hockey" and "yoga." "Males are tight," says Bell, a yoga practitioner and self-described hockey addict. "So when you get hit, you're on one leg, you're diving for the puck, it just helps to be flexible and comfortably low." Bell's game improved enormously after adding yoga to his regiment. "Playing 12 months a year doesn't hurt, either," he notes.

For women especially, playing amateur hockey -- as with other recreational sports -- can bolster self-esteem, suggests Kelly Lilly, who manages the Community Recreation, Exercise, and Wellness arena crew in Morrisville. "We had a woman in our instructional hockey clinic for women," Lilly recalls. "She has two kids who play, and one day she said, 'Why am I always watching?' So she went out and bought used skates, and now she's doing great."

Women in their thirties or forties are picking up ice hockey, according to Lilly. "It's being part of a team. For some women who grew up before Title 9, they had never even played team sports. It's a great experience being with a really good group of women and doing something athletic. It's empowering."

Women's hockey exploded in Stowe about 12 years ago. "There was a big influx back then," says LeBaron. "There was a Friday morning session that still happens, and that's where a lot of women get started. It used to be, our team would struggle to get games, but now there are lots more teams to play around Vermont."

The quality of women's hockey is also improving, thanks to a new generation of younger females who played as kids. "They're really raising the level of play," LeBaron says.

Lilly, who plays with both men and women -- and who can be seen driving the Zamboni still wearing her full hockey gear after her sessions -- notices some differences along gender lines. "We say we're sorry on the ice," she says. "I have a hard shot and recently I totally tagged somebody. I was, like, 'Sorry!'" Still, it didn't stop her from charging toward the rebound and trying to score.

In both women's and men's recreational hockey, levels of ability can vary considerably. But that doesn't seem to be a problem. "Everyone is so accepting," Lilly says. "Guys that are really good still pass the puck to people who are just learning. It's like we know all this is new, and we're going to grow this thing."

Ask just about anyone and they'll tell you the real draw is this sense of camaraderie. "The guys I play with are the world to me," says Bell. "We play hard out there, and sometimes there's even hitting. But nobody ever fights. Who's going to take a swing at the guy you're going to be sitting next to at breakfast after the game?"

Kelly Lilly agrees. "You want to know what my favorite thing about co-ed hockey is?" she asks. "Going out for beers afterwards."