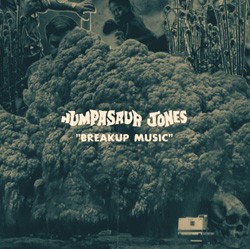 Humpasaur Jones is one of the many aliases of local rapper, occasional blogger and hermetic North Country weirdo Justin Boland. Regardless of his sobriquet at any given moment — we’re partial to Wombaticus Rex — he is generally acknowledged as one of Vermont’s most talented, if mercurial, MCs. His latest recording as Hump Jones, Breakup Music, is a harrowing descent into the fractured, post-breakup male psyche that should serve to deepen the intrigue surrounding him. But its blunt honesty may just preclude him from ever getting laid again in Vermont.

As its title implies, Breakup Music concerns itself primarily with the aftermath of a romantic split that inspires a downward spiral of bad behavior — think Hank Moody from “Californication” but with better flow. While his lyrics are clever and often humorous, a dark sense of tragic inevitability informs Boland’s musings on love and sex. There is no shortage of dick-swinging exploits throughout the EP’s six cuts, but Hump Jones’ humping comes off less as typical masculine boasting than an admission of helpless — and at times, hapless — lechery.

On the opener “Pub Crawl,” Boland excoriates the singles scene, describing with a sharp tongue and effortless flow the lovers and losers that populate any given bar on a Saturday night. He’s preaching from a certain self-righteous altitude when he spits, “I hate to be that hick with no manners / but you ain’t friends, you’re failures with matching low standards.” But it soon becomes clear his perch is no loftier than a barstool. “And every bar is the same but whatever, don’t sweat it, dude. / I might be talking shit but I am still sitting next to you.”

Breakup Music is stitched together by a loose narrative thread — Boland himself describes it as a “short film of an EP.” But it’s never explicitly clear whether Boland is the central heartbroken figure or merely the narrator watching as the lead character boozily spins out of control. The guess here is a little of both. In either case, he frames scenes with a cinematographer’s eye for detail. For example, on the bleak “Look Easy,” Boland attempts to persuade a disinterested lover to ignore the obvious cracks in their relationship by zoning out “with some mac and cheese and bad TV.” It’s a simple but devastating — and desperate — line. And it’s one of several such subtle turns that Boland uses to cut to the bone throughout the EP.

As do many in the throes of a bad split, Boland asks a lot of questions. But on Breakup Music he offers few answers. Instead, he delivers a raw treatise on love and lust that makes no apologies for the self-destruction either can inspire. And he has no time or use for redemption. It is by turns fearless, funny and frightening and, as such, is thoroughly fascinating.