Farmer was scheduled to speak at 7:30 p.m., but the main auditorium was filled by 7. Several hundred more people crowded into an overflow room, where they watched a video feed of Farmer’s talk. Many more milled about in the building’s lobby, straining to hear him speak.

“As you can imagine,” Farmer told the crowd, “this has been a very difficult year for Haiti.”

Farmer is intimately familiar with the Caribbean island nation — the physician and medical anthropologist is best known for cofounding Partners in Health, a nonprofit that got its start in Haiti and provides health care services to the poor in several countries around the world. Farmer, a professor at the Harvard School of Medicine, is currently the UN Deputy Special Envoy to Haiti; former president Bill Clinton is his boss in that capacity.

Farmer pointed out that the country remains crippled by the earthquake that struck Port-au-Prince in January of this year. He cited familiar statistics — 250,000 Haitians killed in the quake, another 1.3 million still homeless. Farmer added some numbers that he says are often overlooked. Of the 28 federal buildings in Haiti, 27 were destroyed, and 20 percent of Haiti’s federal employees were killed. How can a central government function under those circumstances? “This was a really uniquely devastating event,” he said.

And yet, “It’s not just about the misery and the problems,” he said. “There’s really a lot that can be done.”

That was the theme of Farmer’s talk. It’s also, essentially, the story of his life. Or at least the version depicted in Tracy Kidder’s acclaimed 2003 book, Mountains Beyond Mountains: The Quest of Dr. Paul Farmer, a Man Who Would Cure the World. Many in the audience, myself included, had read it. It’s required reading for many college courses, including some at St. Mike’s. 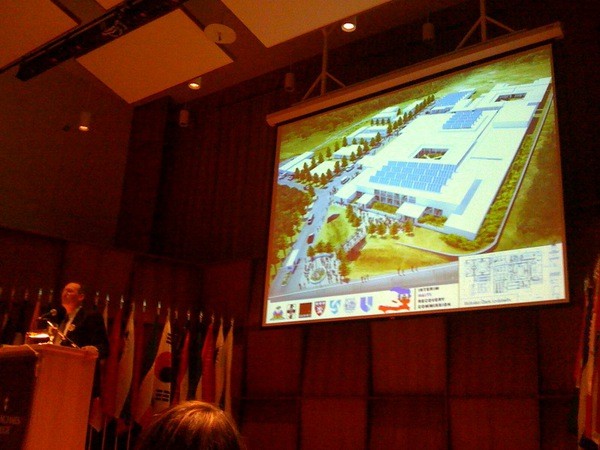 He talked about Bill Clinton’s philosophy of “Building Back Better” after the quake, which means improving, not just replacing, Haiti’s infrastructure. In conclusion, he displayed an architectural plan for a stunning new hospital in Mirebalais developed in a public-private partnership with the locals. “On September 10, we broke ground on this baby,” he boasted. It was a hopeful way to conclude a presentation full of grim and overwhelming statistics.

I confess, I didn’t attend Farmer’s speech because I wanted to write about it. I went because I wanted to be inspired. I’ve followed Partners in Health closely since reading Mountains Beyond Mountains a couple years ago, especially in the aftermath of last January’s Haitian earthquake. Maybe it sounds trite, but I figured that being in the room with someone of Farmer’s stature and hearing him talk about his work would give me hope, or strengthen my faith in the ability of human beings to improve the world.

But though Farmer was charming and funny, and though his free-flowing talk was informative, I found myself even more inspired by the audience, particularly by the staff and students of St. Mike’s, who collaborated to raise $20,000 to bring Farmer to campus. (The money, says Farmer, is donated to charity). I felt like I was getting a contact high from their energetic idealism.

Because I was there to report on the event, I got a front-row seat. That meant I got to sit next to Trevin Schmidt, St. Mike’s Student Association president and one of the people who introduced Farmer. The senior history major had to read Kidder’s book in his very first class as a freshman.

Being a college student, said Schmidt, is like “living in this little bubble.” Reading Mountains Beyond Mountains forced him and his classmates to look beyond their privileged lives and grapple with the plight of the poor. The book inspired him, he said, and made him realize that “an individual can really have an effect on the world.” Schmidt told me that he’s headed to India this spring to spend three weeks volunteering at hospices in Calcutta.

He wasn’t alone in his zeal to change the world. Petitioners who greeted me as I entered the building urged me to support the Healthcare is a Human Right campaign. Another group of students sold chocolate treats at a “Bake Sale for Bhutan,” the proceeds of which will help support their December trip to the Asian country to teach media-literacy classes. Why do the people of Bhutan need to learn about media literacy? “They were the last country in the world to get cable television,” junior Lynne Anderson told me as she sold me a brownie. The St. Mike’s students want them to think critically about TV and the Internet. “We want them to preserve their culture,” said Anderson.

Other students stood up during the Q&A session to ask Farmer for advice on advocating for AIDS patients.

In fact, the most moving moments came before Farmer even took the stage.

Anthropology/sociology professor Adrie Kusserow (pictured), who studied with Farmer as a graduate student, was one of those who introduced him. Kusserow noted Farmer’s accomplishments. “The mission of Partners in Health is both medical and moral,” she noted. “He is medicine and anthropology’s much-needed liberation theologist.”

But Kusserow also offered her own first encounter with Moutains Beyond Mountains, which took place while she was returning from working with refugees in South Sudan and Uganda. At first I tried to jot down what she was saying, but quickly realized I couldn’t capture the depth of her remarks. I asked her afterward to email them to me so I could post them here in full, and she did. You can read the text of her introduction at the end of this post. When Farmer finally approached the podium, he, too, seemed awed by her intro.

At the end of the Q&A session, a student got up and asked Farmer to name one thing that students and others can do to address the problems he cited. Farmer advised him to “be a living link” between privilege and privation, to try to bridge the gap between wealth and inequality, to try to understand the life of the poor in other parts of the world — and here in the U.S.

He added that the St. Mike’s community has already been “extremely involved in Haiti.” “Please don’t stop that,” he said.

It is certainly a great honor to welcome back Dr. Paul Farmer to St. Michael’s College. A medical anthropologist and physician, Paul Farmer is also a founding director of Partners in Health, an organization that provides high-quality and innovative, community-based health care services for people in brutally poor settings. In his books we witness the devastating stories of people he has cared for from Russia to Mexico, Haiti, Rwanda, Malawi, Kazakhstan to Peru as they are born and raised in the often invisible architecture of structural violence that ensure that some humans will become riddled with disease and some will remain blissfully untouched.

He is a master at telling the stories of those trampled upon, unraveling the dense fabric of meaning that is skillfully woven by the humans that live OUT the hegemonic inequalities of class, race, gender and bureaucracy, literally dying through life with diseases like TB, AIDS, cholera and malaria. Paul Farmer reminds us that any advances in health care and human rights must also come from an exploration of violations of human dignity. Violations to dignity represent an unrecognized pathogenic force of harm at least equal to that of virus or bacteria. His research and advocacy gives people all over the world the courage to join social justice with social science. The mission of Partners in Health is both medical and moral. He is medicine and anthropology’s much-needed liberation theologist.

I first read Mountains Beyond Mountains on my way back from South Sudan and Uganda, where my husband and I had been working with Sudanese refugees, with some of the "Lost Boys" of Sudan from Vermont. My son slept beside me, his slack jaw emptying the exhaustion of the day. It had been a harrowing one, as we found ourselves lost in the bus station, as I wove through the stalls, sticky with beer and urine, the drunks pawing at us, gray buses lunging over the colossal potholes from the last brutal monsoon, while street kids hung to the sides of buses with one hand, sniffing pots of glue with the other.

I will never forget when we rounded the corner and found a woman lying like pounded meat in the gutter, reeling from the punches, for requesting a condom, the gurgle of the blood in her cheek as she slumped into a puddle while the drunken crowd jeered. I shoved my son’s face into my shoulder. I could hardly breath from the heat, the rotting and birthing of horrors that multiply in places of such deep, deep poverty. Of course, we made it out. Muzungu white skin is always noticed by a policeman, who knew we were good for a bribe. I felt like Peter Pan in an amateur theater, suddenly lifted out of the mind-boggling poverty by the creaking pulley and strings of some vast system of injustice that happened to serve my son and me well, but left others at the bus station to rot.

Meanwhile, across town, in the five-star Lake Victoria Hotel, a well-fed hibiscus flower lashed its red tongue into the cool, air-conditioned dining room, while tourists spread their starched white napkins across their laps and wait for the next sparkling drink. It is these ludicrous and unnecessary dichotomies in the quality of lived experience that must scream out to Paul Farmer every time he moves from Haiti to Harvard and attempts to straddle both in his mind.

I assign Paul Farmer’s work to my students to show them not only the deep social roots of suffering, but also to remind them that these grave disparities should never make sense or be tolerated in any given moment. Farmer’s work reminds them that these disparities should never let you rest, that it is normal, natural and right for them to keep you up at night. Don’t try and domesticate or naturalize them out of your conscience.

One has the feeling these disparities still scream and kick inside the mind of Paul Farmer. That such extremes can coexist on this planet quietly, almost effortlessly, we have known for centuries. That they do not have to is another story, a story that Paul Farmer is trying to write. Lest we begin to think it is fate, Paul Farmer highlights the unnatural, unnecessary nature of inequalites, and of the way humanity could look if we did not straddle such extremes in an age of opulence and affluence. He believes there are no little people, no nobodies who must lay mute on cots, grateful for dirty syringes and used bandages, meekly returning to their broken nests of slums. His dogged work, deeply humanitarian vision and courage continue to inspire us all and give us hope. Please join me now in welcoming Dr. Paul Farmer.